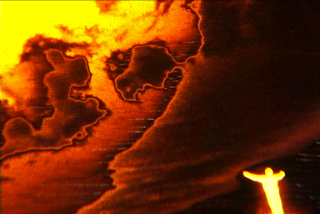 Balagan Films of Cambridge, Massachusetts represents what is currently the heroic norm in avant-garde cinema curation and exhibition: a not-for-profit operation scouring the world for distinctive aesthetic experiences while relying on crowdsourcing to scrape enough funds together to just barely survive. At Balagan’s latest program – their first after an abnormal hiatus of several months – the staff’s repeated plugging (self-consciously described by head curator Jeff Silva as “beating a dead horse”) of their soon-to-expire Kickstarter came across less as cash-happy beggary than as an unfortunate necessity, an earnest plea for assistance better to get out of the way up front and move on to what really matters: the moving images.

The films in this latest program, which was entitled “DIY Dystopia” and ran approximately an hour and a half, are associated by their shared concerns over the state of the natural world in an increasingly jeopardized industrial landscape. An additional charge of immediacy is attached to this theme when considering that all of the filmmakers involved – Douglas Urbank, Jennifer Reeves, Christina Battle, Dan Baker, and Ben Rivers – are currently based in cities; an intensely “artificial” environment, as one Balagan curator noted. (Dante’s Quartet (1987), a film by the late Stan Brakhage, was also featured in the lineup, and he too spent a great deal of his life in an urban center.) Incorporating a blend of traditional shooting, hand-painting, optical printing, found footage manipulation, and other esoteric uses of celluloid, the films not only seek unpredictable methods for representing the contemporary environmental crisis but also tie this lament into the decay of material cinema as a larger practice and as a way of seeing.

Boston local Douglas Urbank’s in-progress found footage film WWII kicked off the evening accompanied by a live score from acoustic improv trio Duck That, a hissing, squelching, howling exercise in sustained tension that eerily matched the images of dead soldiers being carted to and fro in wheelbarrows and Nazi officials gathering in chunks. In fact, the otherworldly rattle emanating from Duck That’s shadowy corner beneath the screen – blown through woodwinds, gargled through loudspeakers, and punctuated by the sounds of unidentifiable trinkets – threatened to divert the attention away from Urbank’s somewhat dryly repurposed imagery, in which the only conspicuous marks of deconstruction are animated shifting tear lines and rows of circular negative space, implemented as if to suggest the footage crumbling and splitting apart. 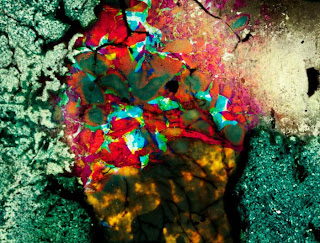 The next film, Jennifer Reeves’ Landfill 16 (2011), offered a far more dense and mysterious visual surface. Presumably a tattered amalgamation of direct painting/scratching and less controlled manners of celluloid handling (i.e. burying in the dirt), the resulting visual chaos alternately evokes bubbling magma, eroded rust, and scorched Earth. The film’s weather-beaten color palette – resembling that of late-period Tony Scott – mutates as frequently as the textured surface, pulsating inward and outward in a mess of scratches, blotches, and Petri dish patterns. Towards the latter half of the film, barely legible images of wildlife begin emerging beneath this layered visual noise, marking the first instance of a rather didactic gesture that repeats throughout these films: the posing of a contrast between technology/human waste and seemingly untainted nature. (Landfill 16’s ambient soundtrack, which pits together distant industrial noises and ghostly field recordings, forges the same dialectic.)

Christina Battle’s Buffalo Lifts (2004) packs similarly hypnotizing imagery into its concise three-minute running time: an extended shot of a buffalo herd moving, significantly, from right to left that is nearly overwhelmed by the calculated destruction of the film’s surface. Here, a particularly punchy metaphor is raised regarding the simultaneous degradation of the natural world and physical cinema. As the buffalo charge insistently across the frame – their mere directionality subliminally invoking degeneration – they rush towards extinction, just as the celluloid they have been captured with is combusting around them, reducing them to strokes of pure movement. The film’s silence underscores its power; no frivolous elements are needed for such a harmonious matching of form and content. 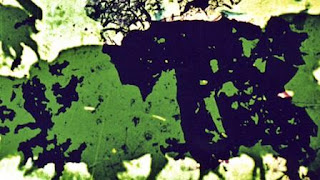 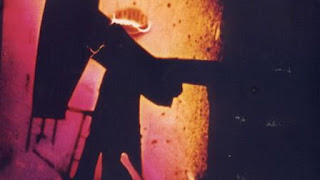 Battle is also responsible for Oil Wells: Sturgeon Road and 97th Street (2002), a work of similar brevity and potency. The film’s focal point is an image of a silhouetted oil derrick bobbing slowly in and out of the ground, but it’s by no means a very descriptive shot. Instead, the methodical motion of the drill is reduced to a graphic cadence in the frame around which the detritus of burnt, dirty film stock gathers. Through rephotographing techniques, Battle shows the image being knocked out of alignment with the projector, a sudden boundary obstruction that echoes the derrick’s disruption of the line between land and sky. As in Buffalo Lifts, neither the Earth nor celluloid can survive such exploitation of the natural world.

Dan Baker finds a lovely image for this inherent doom of nature in the face of man-made extravagance in Transaension (2006), which the filmmaker claims is about fossil fuel extraction: a human figure, burning like the sun in the bottom right corner of the frame, dwarfed by a fog of fiery abstraction, stacked up like layers of compromised geological crusts above him. It’s a fleeting image, but it’s undeniably the most resonant of the show. Baker pushes past some of the simple-minded dichotomies permeating the rest of the films to arrive at a crystallization of human resilience against its own self-destructive tendencies. The rest of the sex-minute film is spent building up a hellish miasma of red and orange blotches and spiderweb scratches suggesting cracked rock, all set to a menacing low-frequency drone; this is human progress as an inescapable nightmare, not something to be pondered or lightly questioned.

Alongside these relatively low-profile works, Balagan curators thought it fitting to conclude the program with films by Stan Brakhage and Ben Rivers, two artists already somewhat well known for their expressions of a pastoral ideal. Dante’s Quartet, a hand-painted assault structured around Dante’s four stages of afterlife, and Ah, Liberty! (2008), another of Rivers’ monochrome, cinemascope explorations of human communion with nature, provided a rather serene ending to the dystopia presented by the other films. Two Years at Sea, Rivers' first feature-length work, was one of my key discoveries in 2011 and remains one of my favorite films of the decade so far, and this short, Rivers' very first release according to IMDB, works in a similar vein. Naturally lit black-and-white images of wildlife mix with a score comprised mostly of diegetic sounds, but here Rivers brushes up against narrative and genre elements. The film's premise is simple: a seemingly pure landscape becomes host to a series of increasingly bizarre human interferences culminating in a pair of hooded toddlers beating and swatting mindlessly at the wreckage left by an earlier brush fire. These odd staged bits rest somewhere between horror and absurdism, but the overall tone lands on the lighter side largely because of Rivers' inspired use of the spacious 2:35:1 format, which creates an inherently freeing composition; even in an ostensible close-up, there's a great deal of image for the eye to explore.

It's easy to wonder whether the Brakhage short was included merely for the sake of contrasting a current, politically charged approach to handmade film with an older, more metaphysical one. Otherwise, Brakhage's short seems out of place in the context of all these self-consciously environmentally-minded works. At the very least, its existence within such a contemporary program exposes how prevalent and unavoidable this issue is in our present world; recognizing the eerie parallels between the decline of celluloid and the decline of the natural world, these filmmakers seem to have arrived at their finished material out of a sense of obvious ethical responsibility. The urgency shows. Only a measly portion of contemporary cinema bothers to creatively engage with the unignorable fate of our industrial over-reliance, and Balagan has managed to tactfully unify the noble few.