An Evening With Vampyr (Dreyer/1932) and Steven Severin 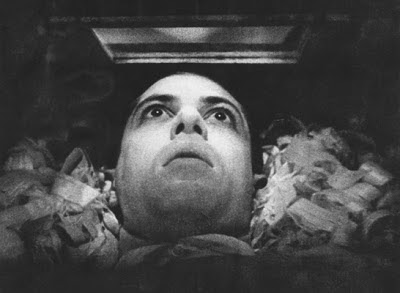 From the vantage point of a semi-jaded soon-to-be graduate of film school, Carl Dreyer's Vampyr embodies a film-school surrealist's idea of plot: stick a character in a weird scenario, watch as things get progressively strange. But the basis of this (some might say Lynchian) approach is Vampyr, and it was a whole lot more powerful in 1932 with Dreyer's formal innovation than it is in 2012 with half-baked conception and quasi-ironic gimmickry. The film follows, circa intertitles, "young Allan Gray, who immersed himself in the study of evil worship and vampires" and "a dreamer for whom the line between the real and supernatural became blurred," as he enters a remote European village and checks in to a dark, dusty inn. From there, Allan gets involved in the macabre history of the inn, where ages of the undead still stalk the premises and all manners of paranormal happenings occur. The machinations of Vampyr's narrative would hardly meet a literal-minded screenwriter's approval – Allan's barely developed, the spatiotemporal logistics of the world are not accounted for, characters and subplots shapeshift – but Dreyer's real accomplishment here is imaginatively recreating Allan's feverish subjectivity at a time when few films attempted such levels of paranoia and disorientation.

Dreyer wastes no time establishing the off-kilter world, letting Allan be greeted immediately by bizarre occurrences. When approaching the inn, he sees a dark silhouette beside a lake bearing a scythe, but it's not quite a Death figure; it's something less overtly sinister and more down-to-earth, a man capable of enacting physical rather than abstract violence. On his first night, a crippled insomniac enters his bedroom, circling the space slowly before reaching him as if gathering up demonic forces. Leaning over, his eyes gleaming, he offers Allan a book on the vampiric history of the village and admits to his own need to be saved from the imprisoning loop of the undead. Not long after, Allan is scouring the book for secret information about the mysteries of the inn (information that Dreyer relays via shaky intertitles), and clues from the text start to materialize around him. As an audience surrogate, Allan manages to be both overeager and fundamentally detached, lending the film the feel of a waking nightmare in which nothing can be acted upon or stopped.

Vampyr is full of indelible images, and the visions accumulate at a relentless rate: a view of the shadow of a man digging a hole displayed in reverse so that it appears as if he is forcefully burying something; a wide shot of a surface of water where the reflection of a man walking by has no above-ground counterpart; a close-up of the recently bitten innkeeper's daughter turning her head slowly on axis with a chilling grin stuck to her face; an image of Allan's soul casually leaving his body; an aerial shot of his blank face as he's carried away in a coffin as well as the point-of-view shot of the sky, trees, and imposing inn from inside the coffin. Dreyer's standout images are surrounded by unsettling blankness, a peculiar emphasis on walls and doors that suggest claustrophobic dead ends. Indeed, the film's horizontality and flatness is a bold gesture in a genre in which vast, shadowy spaces are the common route for implying dread lurking where it's least expected. Vampyr, however, still summons the atmosphere of the best horror films, a visceral effect that has to do with the indistinguishability between the real and the unreal, facilitated by Dreyer's skill in filming both tangible horror and the horror of the unseen as if there's no difference. 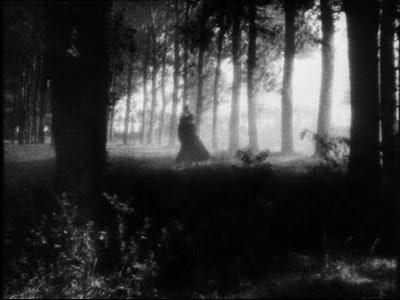 Technically, Vampyr was Dreyer's first sound film despite its scant use of sync sound, but for all intents and purposes, it remains an expression of silent cinema. The first time I saw the film on DVD, it was accompanied by its original monaural score, a rickety orchestral haze by Wolfgang Zeller that sounds as gloriously degraded as the image, but seeing the film again in a theater setting, I was able to witness longtime Siouxsie and the Banshees' bassist and English musician Steven Severin's intense, cathartic live ambient score, perhaps even more fascinating than the original music for the way it digests the impact of Dreyer's film and intensifies its moods from a retrospective angle. Incorporating repeating motifs and movements that emphasize the cyclical nature of the vampire history in the village and Allan's sightings, Severin's music is awash in thick synth-pad drones, reverby chimes, electronic string sections, floor-shaking bass rumbles, and amorphous melodies. Certain movements suggest the dreamy romanticism of a Badalamenti/Lynch composition with its sappy tunefulness emptied out and rendered distant and ghostly (if that sounds like I'm describing what Badalamenti and Lynch are already doing on a standard piece, it goes to show how radically this score recedes into murkiness that it outdoes even their most unconventional scores).

If pressed to choose between the original and Severin's sound, I would probably opt for the latter. Coupled with this eerie, disheveled print from the 1930's, the modern ambient music offers a compelling clash of generations and approaches to the same sense of moody atmospherics. But even beyond that, Severin's music offers a more innate understanding of Dreyer's intention, a more complex and fulfilling synergy with the moods of the film, even outlining some of its tonal and thematic progressions through musical shifts that were not as obvious in the original score. Its throbbing drone sits confidently atop the action, giving shape and depth of feeling to Dreyer's more aimless interludes, and in the rare instance that Severin makes an attempt to sync loosely to what's onscreen, it's startlingly effective, as in a creepy shot when Dreyer's camera pans along a wall of shadows of dancing patrons and Severin conjures up a bygone jitterbug reminiscent of The Shining's music. I seriously hope this soundtrack iteration becomes more widely available at some point in the future, but if it never ventures beyond infrequent appearances in live settings, it's an experience not to be missed.