The Master (2012) A Film by Paul Thomas Anderson 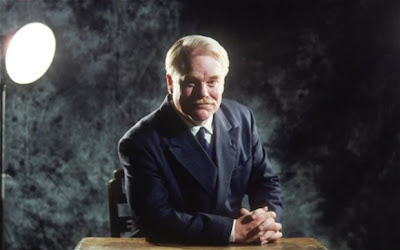 So often as viewers we forget the craft of good film acting. We take advantage of the fact that there's a distinct and challenging path taken to get to a representation of a character onscreen. The film actor is highly fragile material, and anyone who's ever tried their hand at directing – or even anyone who's ever witnessed a director/actor relationship in action – knows that at any given moment communication can break down entirely, that something in the air, something difficult to pinpoint, can combust between the director and the actor and cause nothing to turn out as expected or hoped for. Nurturing a strong collaboration is sort of like zen or voodoo. When it works, a sacred zone with a unique, primitive language develops. Once you're in that zone, a lot can destroy it. It's complicated by nature, vulnerable to slight outside influence, and susceptible to minute shifts in power dynamics. Come to think of it, it's a lot like the relationship between Lancaster Dodd and Freddie Quell.

Paul Thomas Anderson's last two films (and to a lesser, varying degree every film that came before them) have been profound studies of great acting performances – not just films that feature great performances, but films that observe, explore, flaunt, and valorize them. Indeed, Anderson has somewhat suddenly become one of the most gifted actor's directors out there, and, as far as I'm concerned, has overseen the finest feats of acting yet in 21st century American cinema. It certainly helps that he's had some not-too-shabby resources to work with - Daniel Day Lewis, Paul Dano, Phillip Seymour Hoffman, and Joaqiun Phoenix are some of the best in the business - but even the best are human and are therefore capable of falling apart in a role. Even more so than There Will Be Blood, Anderson's new film The Master engages intimately with its central performers; if the prior film was a controlled, brooding slice of perfection, the new one is bulky and exploratory, but what it lacks in overarching fluidity it makes up for in extended, near-transcendent observations of human behavior at its most unpredictable.
Daniel Plainview was a force of life in There Will Be Blood, a total animal, and in some sense Anderson's crisp widescreen compositions and assured pace kept him at bay. At the same time, the tension between his feral, explosive qualities and the film's formal restraint was a major source of excitement. To a degree, The Master keeps this tension intact, yet it also indulges its attention on the mysterious, compulsively watchable Freddie Quell (Joaquin Phoenix), and eventually his foil Lancaster Dodd (Phillip Seymour Hoffman), at the expense of forward narrative momentum. This is a film that finally earns the definition "character study," rather than just wearing it as a vague indicator of depth. Many scenes are exclusively about picking apart the central characters, defining and exploring their hidden complexities, and observing their physical form for great lengths of time; indeed, the film's centerpiece is an extensive "therapy" session between Dodd and Freddie in which they do exactly these things to each other, and Anderson films them in piercing close-ups (rarely has a shot-reverse-shot set-up felt this tangible, this searching). 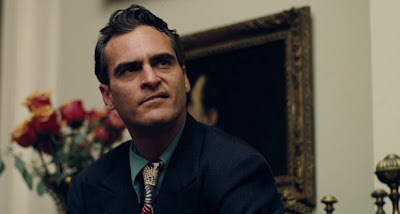 The first, and strongest, half of The Master follows Freddie, a discharged World War II veteran, as he boozes, curses, and masturbates his way through postwar malaise. Anderson's structure is very much free-form and circumstantial here, reflecting the unhinged drift of Freddie's life; something happens, then another, then another, and so on. Freddie has sex with the sandcastle of a naked woman, descends into the bow of a Navy ship (not unlike how Plainview descends into the parched Earth) to suck down the first of many poisonous alcoholic concoctions he makes in the film, works a brief stint as a migrant farmer before being chased from the land by angry Filipino workers who insist he's intentionally poisoned their ailing co-worker with one of said concoctions...etc. While circumstances accrue on top of each other, the filmmaking seems every bit as uncertain of the near and distant future as the drunken, sex-obsessed Freddie. Both Hou Hsiao-Hsien and Werner Herzog come to mind during this compellingly aimless section, the former for the planted, shallow-focus camera that pans and tilts perfunctorily as its subject of focus drifts around the space and the latter for the nonjudgmental devotion to the mad logic and trajectory of the central figure.

Freddie speaks with his head tilted upwards, the line of sight from his squinted eyes just barely reaching over his cocked face, and through only one side of his perpetually slanted mouth, but for quite some time he doesn't speak much at all (like There Will Be Blood, The Master begins by merely dropping the viewer into its hero's milieu, catching the mood of the environment without launching into a narrative). His default pose is to hunch over while peering blankly into the distance with a vaguely inquisitive expression that is really just the shell-shocked result of a man longing for sexual contact. Before any significant lines of dialogue are spoken, this sense of physicality is overwhelming, dominating Anderson's loosely-defined frames. In fact, the mere observation of Freddie's formidable presence in such great detail cements the notion that The Master, despite the fact that its titular figure is Lancaster Dodd, is ultimately Freddie's film, and Anderson's fascination with him as a living, breathing, altogether authentic human object runs throughout the entire film even as other threads come and go. 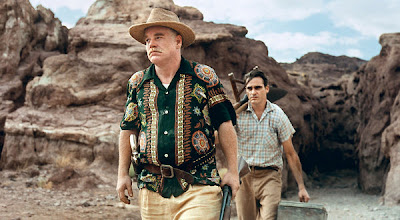 One of those threads: "The Master" himself, Lancaster Dodd. That the initial meeting between Dodd and Freddie is kept offscreen is perhaps a sly suggestion on Anderson's part that he is less important as a man in his own right than as a man with an effect on Freddie. Instead, Dodd's presence is first symbolized by the romantic ocean-liner that Freddie inadvertently stumbles upon and on which Dodd is throwing a party for his quasi-religious fan-cult – that is, to Freddie, an emblem of status, wealth, and achievement (traits whose implications Anderson will gradually pick apart over the course of the film). In a film that gently scrambles chronology and elides revelations without calling much attention to it, it's par for the course that Dodd and Freddie's first onscreen conversation feels like the continuation of a conversation the previous night aboard the ship; Dodd inquires about Freddie's alcoholic concoctions, and Freddie awkwardly inquires about a job (which Freddie "gets," but the nature of that job is never clear, suggesting that a relationship to Dodd's cult is work enough). Already there is a sense of a mutually beneficial relationship at play. The Master details the transition of those benefits from concrete forces to the abstract, intangible stuff of macho relationships.

Dodd is referred to as "The Master" by a swarm of mostly retired women, and he spearheads a worldview dubbed "The Cause." (For extra information on the associations with Scientology, see Kent Jones' comprehensive piece. I won't go into any of it here because I recognize that Anderson's aims are much less specific than this single religious denomination). As Dodd's son (Jesse Plemons) puts it, Master's "making it all up as he goes along," pulling wholesale from various schools of thought such as Buddhism, Christianity, Freudian psychology, New Age Spirituality, and the pragmatic everyday teachings of self-help books. The actual content of his theories is of much less interest to Anderson than the persona of leadership he is able to erect and wield to his social and financial advantage, as well as particularly how that persona acts as a much-needed grounding for Freddie, who up until meeting Dodd appears on the brink of self-destruction.

As in There Will Be Blood, the central character dynamic is that of a forward-moving introvert and the false prophet that distorts, partly unintentionally, the introvert's true self. Anderson's riffing, quite explicitly, on a master/servant dynamic, yet he's also continually revealing the unexpected nuances of this type of relationship. The aforementioned therapy scene doubles as an exposé on the notion of performance, and where Dodd succeeds in his work is getting Freddie to finally break through his off-putting weirdness and reveal something about his emotional core. His confession that he's in love with a girl back home (embodied as an angelic adolescent ideal by Madison Beaty) emerges so organically and spontaneously that it's as if he wasn't even consciously aware of it until prodded by Master. But as much as Master is able to excavate unseen dimensions of Freddie, Freddie's nearly puppyish servantry proves instrumental in the maintaining of Master's sanity and confidence as a leader. (Freddie's support is even more important to Dodd than his disapproving wife's (Amy Adams, who is all but suffocated alongside these monstrous performances), or any of his other female followers (Laura Dern among them). Women in general play only a peripheral role in the development of these absorbed male egos, and when they do figure, it's mostly in the form of one-note abstractions.) Late in the film, when Freddie is about to free himself from Master's grip once and for all in a dialogue scene that takes place in Master's very Citizen Kane-ish dwelling – also reminiscent of Plainview's final resting place (more and more similarities arise...) – Master tells him "if you leave me, I never want to see you again." It's a telling statement that gets at the dependent quality of the relationship; Dodd wants a definitive answer regarding whether or not he will have access to Freddie's presence, because if he doesn't at least know, he seems unable to go on. 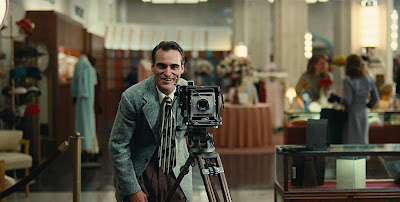 At any given moment The Master feels like it's going to explode with tension, that the primal churnings of man will wreak havoc on the unruffled surface of the film. This has been a recurring sensation in Anderson's filmography, but it's never been quite this palpable. The tweaks in Anderson's style (less tracking shots, less completely static compositions, less depth of field, a lot less) have shifted greater emphasis to the interactions of the characters themselves, and even when a composition smacks of immediate subtext - such as in the brilliant jail cell scene between Dodd and Freddie in which each of them occupy their own half of the frame, one frenetic and one stoic - there's a casual, almost fly-on-the wall quality to the images. Even a tight close-up has a loose, moldable essence. In every sense, the image-making is the antithesis of the shots that Freddie takes during his on-again-off-again role as an advertising photographer, first for a department store and later for Master's own brand: posed, artificial images of America, of consumerism, of normalcy, images that Freddie rejects entirely in his haphazard, messy pursuit of pure behavior.

We are first introduced to Freddie through a view of the top of his grey combat helmet, a blank surface that hints at the existential juncture of this character. It's also a clearing of the slates that supports the notion that The Master is the story of mankind, told through Freddie: a slow movement from primal, uncivilized existence towards economic and cultural superstructures (Dodd), and how the authentic human is perverted along the way. Perhaps this is giving Anderson too much credit, that it's cohering ideas that were fuzzy in the conception of the film, but there's too much of an insistence upon defining the term "animal" here to not acknowledge Anderson's cosmic ambitions. Put simply, Freddie is an animal, a man who listens to his primal sexual and violent instincts, while Master is a man who tries to reject the idea of animalism only to continually reveal his instinctual side in outbursts of emotion as he feels his air of authority slipping away. As much as Freddie's a prick, the film sticks with him and harbors a tragic romanticism towards him, because when the influence of social organization has left the picture, he's still there at the center of the film, a man unwilling to temper the volcanic urges within him.