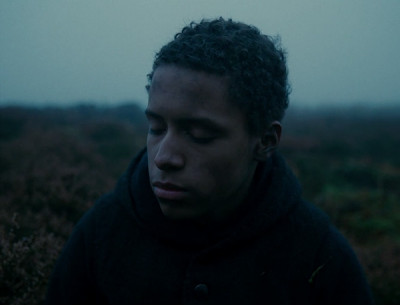 If there was any doubt of the emotional infantilism and redundancy of Andrea Arnold's new and fiercely independent update to the classic novel Wuthering Heights, a tune by English pop-folk act Mumford and Suns portentously titled "The Enemy" springs up on the soundtrack, interrupting the soundscape of this otherwise insistently diegetic work. The song cries, "How could you lean on a man who was falling?" a pithy summarization of the central doomed romance of Heathcliff and Cathy Earnshaw, two young lovers in a windswept farmhouse in a harsh 19th Century Yorkshire landscape. Arnold pulled a similarly heavy-handed move in her previous Fish Tank with Nas' "Life's a Bitch," a rap that not only cemented the film's incessant miserabilism but also undermined the progress hitherto made by the impoverished characters. Musical accompaniment this overt and unwarranted can't help but give the impression of a director timid about the impact of her source material and the methods used to convey the emotions and themes within. In Fish Tank, that timidness severely distracted from the strengths of the film; here, it's just a safety net, another sign that the audience should be feeling the kind of unease and desperation that they've been feeling throughout.

Fortunately, the musical coda is not the nail in the coffin of Arnold's work. This is a film loaded with too many striking aesthetic ideas and brooding atmospheres (all of which descend from Tarr, Malick, and French director Philippe Grandrieux, who uses similarly abstracted handheld shots) to be entirely hampered by its intermittent juvenilia. With its opening scene of an adult Heathcliff (James Howson) slamming himself into a concrete wall repeatedly in a drab, featureless room filmed in queasy handheld shots that translate the brutality of the act to the screen, the film announces itself as a proudly extreme diversion from the long line of previous cinematic adaptations of Emily Brontë's text. Arnold replaces dialogue, character development, and lavish attention to period decor with mud, wind, rain, and rotting animal carcasses, all of which impress upon the film a tactile relationship with nature. The weather (usually grey and threatening) and the open landscape dictates the lives of the characters in the novel, and Arnold, recognizing that as the most cinematically expressive aspect of the work, fills the film with shots of flora and fauna and painterly montages which seem to accomplish little narratively. It's tough to say whether Arnold is making any kind of statement about man's minuscule part in the natural world; instead, this fascination with the details of the setting functions to ground Heathcliff and Cathy's youthful emotional reticence in a very specific place in nature.

Arnold is so committed in her portrayal of the Yorkshire setting that nature is often called upon to fill the void left by the primitive character development. Part of the goal here is to strip the novel down to its narrative essentials, compressing the book's epic romance and its themes of obsession, outsidership, class warfare, and religious hypocrisy to an implicitly felt brew of glances and gestures. When young Heathcliff (played by 14-year-old Solomon Glave) - a wandering black kid of questionable origins (Arnold's decision to do away with Brontë's more ambiguous explanation of Heathcliff's outsider identity and go straight for a black-white dichotomy is both a brave and simplistic decision) - is taken in by the lowly Earnshaw family because Mr. Earnshaw (Paul Hilton) believes it to be "the Christee-yan thing to do," Arnold immediately conveys the family's knee-jerk intolerance of their new black brethren through the menacing stares of Mr. Earnshaw's hateful son Hindley (Lee Shaw), the family's servant Joseph (Steve Evets), the housemaid Ellen (Simone Jackson), and even young Cathy (Shannon Beer). Little is spoken, but Arnold's choice to stage the meeting of Heathcliff and the Earnshaws on a rainy night by inky, flickering firelight, as foreboding a set as any in a film of fog, dim natural light, and dark interiors, directly introduces racism as a central theme. 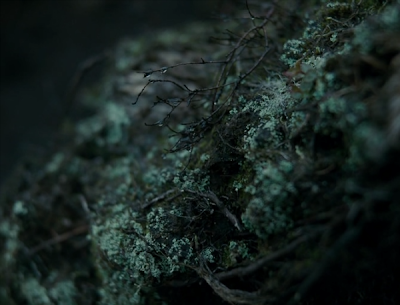 The second aim of Wuthering Heights is to capture the feeling of hesitantly falling in love for the first time and of hormonal charges bursting to the surface at unexpected times and in unusual ways. Fish Tank's best scene featured a dangerously seductive Michael Fassbender fondling the daughter of his character's girlfriend, and by shooting the scene through the girl's perspective, Arnold was able to catch the vivid moments of fear and excitement that characterize sexual awakenings. Here, she rigorously adopts Heathcliff's perspective for the entirety of the film, and his first intimate encounters with Cathy pop like sunshine against the murky landscapes. One scene involves the two of them riding a horse, and for an extended moment Heathcliff luxuriates in the closeness, slyly smelling her hair and glimpsing her bouncing figure. Later they wrestle around in mud, an act that's fueled by both sensuality and subtle vengeance for Cathy's earlier intolerance, especially noticeable when Heathcliff pins her wrists to the ground in a charged embrace. Arnold deftly handles these moments of emotional ambiguity with claustrophobic, intuitive camerawork (aided further by the film's unconventional 1:33:1 aspect ratio).

Trouble is, Wuthering Heights is a two-hour-plus feature film, and it never expands these thematic roots any further. Racial tensions balloon outward into obligatory n-words, and the burgeoning sexual urges between Heathcliff and Cathy fizzle over into their adult selves (Howson and a questionably cast Kaya Scodelario), who are still kowtowing around one another and making indecisive advances. Instead of exploring the contours of these difficult emotions, how they morph and stagnate over time, Arnold prefers to reduce them to symbolic gestures. Thus, the relentless images of mangled and defenseless animals are able to stand in for both Heathcliff's animalistic image to the white folk and the inevitably decaying loss of innocence in the central romance. After not one but two puppy hangings, the film becomes metaphorically burdensome and, frankly, cruel. At a certain point around a third of the way through, Wuthering Heights bottoms out, adding nothing new to its portentous cycle of anticipation and failure. When a teary-eyed Heathcliff smothers Cathy's recently deceased body with kisses in the final act, it's a punchy metaphor for the film's own belated explosion of emotion.