I Walked With a Zombie (1943) A Film by Jacques Tourneur In the Val Lewton-produced, Jacques Tourneur-directed RKO horror classic I Walked with a Zombie, the "zombie" is chiefly a metaphor for the steady encroachment of a dark past, the messengers of a long-overdue retribution. Placed beside the contemporary predilection for zombies as empty purveyors of shock and gore, the film's thematically charged representation of the folkloric figure is a refreshing difference. Set on an island in the West Indies during what is presumably the time of production (1943) - that is, only a short 75 years or so after the Civil War and right in the final three decades of Jim Crow-era America - the film focuses on the arrival of a young nurse named Betsy Connell (Frances Dee) to care for the vegetative wife of Paul Holland (Tom Conway), a wealthy plantation owner. The precise cause of Jessica Holland's (Christine Gordon) mysterious illness is unknown, though metaphorically there is a suggestion that it is some kind of karma-like punishment for an affair with Paul's brother Wesley (James Ellison) that the script hints at vaguely. On the outskirts of this melodrama is a strange voodoo camp lead by the African-American workers at the plantation, and although only revealed in the second half of the film, the camp has a constant, menacing presence in the film, its eerie tribal drums and atmospheric chants echoing through the humid Caribbean air.

The visual and geographic division between the slave laborers in the corn fields and the Americans with their petty dramas in the palatial estate is an immediate sign of Tourneur's intent. This is a film about the massive, often unaddressed exploitation of blacks by white men and women of privilege, a history of condescension and subservience that continues today in subtler iterations. Late in the film, the mother of the Holland brothers as well as a nurse sympathetic to voodoo, Mrs. Rand (Edith Barrett), gives a matter-of-fact description of zombies as "both living and dead," which might as well be in reference to the film's underlying subtext: the ceaseless struggle between blacks and whites. For the plantation owners, the African Americans are both living - living enough to complete work for them - and dead, totally peripheral to their lives of luxury. Even more unsettling in retrospect is the notion that our collective memory of the atrocities of 20th century America (and before) jibes with the same description. They can never quite be snuffed out, even as many try so desperately to block them from consciousness.

I Walked With a Zombie traces the ways in which the African-Americans gradually infringe upon the tale of Betsy and the Hollands and ultimately reclaim the land as their own. First, Betsy, an audience surrogate stumbling into this uneven social landscape, is introduced to a strangely foreboding statue within the Holland's gates of St. Sebastian with arrows shot through its heart that was allegedly ushered into the island on a slave ship. It's a striking, multivalent image and one that seems to be a self-congratulatory emblem of equality for the white folk, as if their use of laborers in the corn fields is an act of salvation from their prior exploitation as slaves at sea. Yet it carries a secondary, possibly unintentional meaning as well: the notion that the African-Americans can be freed from brutality in death, which is particularly ironic given the progression of the narrative therein. A tall, black zombie known as Carrefour (Darby Jones), the guardian of the late-night voodoo tribe, eventually finds his way into the grounds of the plantation, silently beckoning forth the comatose soul of Jessica, knowing that she too longs vacantly for the blissful release from her pitiful worldly existence. She is also a victim of a powerful white, patriarchal grip. 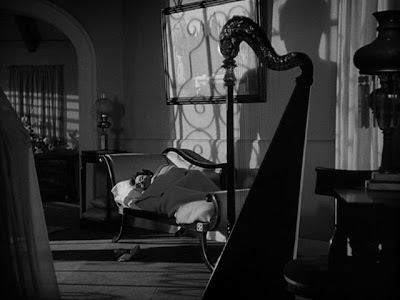 Tourneur keeps the ostensible narrative of the film to a minimum. What is revealed is mostly fragments of a past story weighing on the present, which deepens the film's circular idea of history and shifts the emphasis to the metaphorical implications of the horror. Betsy is made privy to the Holland backstory through the gossip delivered in song form by a black man (Sir Lancelot) crooning near her afternoon lunch with Wesley. Clearly, the island's inhabitants have made a fuss about whatever happened between Paul, Jessica, and Wesley, and the rumors fly across the town, taunting the rich, snobby men. When Wesley overhears the song, he fumes angrily and quickly puts an end to the man's entertainment. In a scene shortly after, the man signs the song again, this time at dusk in a quietly menacing tone. He trudges slowly towards Betsy during his airy calypso ballad, his face becoming fully submerged in shadow. What was at first a harmless tune is now a dark omen through Tourneur's chiaroscuro light and somnambulant staging. The same effect is achieved in the film's horror centerpiece when Betsy guides the sleepwalking Jessica through the corn fields at midnight, stalling occasionally at portentous indicators of death such as a skull, an animal carcass, and the towering Carrefour. Tourneur's minimalistic staging and lighting, as well as his lingering, evocative close-ups, makes it easy to forget the sequence was crafted in a soundstage with cheap props.

Such is the essential lesson of Tourneur and Lewton's cinema: that careful, crafty wielding of sight and sound, as well as a purposeful use of space, absence, and metaphor, renders production value and budget quite negligible. I Walked with a Zombie is so unsettling, so politically and racially motivated, that it's almost as if Tourneur's entire purpose for the relatively measly $150,000 granted to Lewton from RKO was to unravel a disguised attack of white privilege and historical disregard. It's possible to make the case that Tourneur's reliance upon the African-American figure as the source of schock and horror merely perpetuates negative stereotypes, but the film actively denies presenting these "zombies" as malicious monsters, instead treating them as melancholy figures seeking acceptance. In this light, Darby Jones gives a truly haunted performance as Carrefour, the zombified slave carcass with beady eyes and a perpetually sad, disheveled deer-in-the-headlights expression. Shirtless so as to expose the lung churning determinedly inside his bony frame, and with dark pants too short to extend the entire distance down his lanky legs, Jones glides through the film enigmatically, a specter from a dark past that just won't go away. And Tourneur's film operates in a similar fashion, its creepy, insistent rhythms and vital worldview still possessing a raw energy today.
Posted by Carson Lund at 9:44 PM