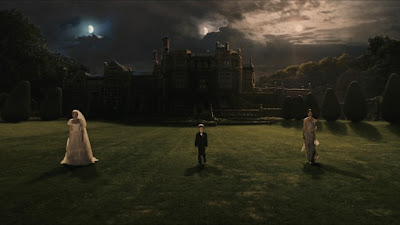 Twenty years from now and henceforth, Lars Von Trier will be a fixture in surveys of film history. It’s hard to even say that about some of the greatest directors working today (of which I would not include Von Trier). He perpetually has his finger on the pulse of his viewers and is so gleefully and powerfully able to exploit that. One cognitive approach to cinema is as a tool of manipulation, and, setting aside the problematic ethical implications of that course of thinking for now, Von Trier is a master of manipulation. No director provokes such a physical response (nausea, chills, ecstasy) out of me, and no director gets me so livid one moment and so impressed the next. (I realize that by now this response to Von Trier is a cliche.) Melancholia is certainly no exception. Its opening montage is the most superficial, plastic-looking pastiche of Tarkovsky, Bruegel, and Last Year in Marienbad I've seen, yet it's somehow fascinating. Comprised of shots so slow-mo'd that they might as well be still frames and set to the Wagner symphony that is repeated bombastically throughout the film ("Tristan and Isolde"), the sequence feels emotionless and contrived. When Von Trier cuts away to the cosmos first for an elegant planetary dance and then for a representation of the titular planet bulldozing Earth, I couldn't help but recall Tree of Life, and in doing so, I was struck by the contrast between Malick's graceful, unassertive skill and Von Trier's self-serious, in-your-face heckling.

But it is precisely that heckling that makes Von Trier's work so distinguished. His aesthetic has taken a turn towards the romantic and the sensational since Antichrist that is aggressively singular: all downtrodden faces, gnarled jump cuts, deep, dark earth tones, and oppressively mangy tableau presented in rich high-fidelity widescreen. It's a look that can be both striking and thuddingly overwrought, like a melodramatic prime-time network TV drama. (The rate at which Melancholia vacillates between the two extremes suggests Von Trier rushed through production, spending more time on scenes he felt were of greater importance.) Even sillier is the insistence upon narrative segmentation, with title screens rendered in scratchy, prehistoric text or (as in Melancholia) iconic, Biblical scroll. Here, Von Trier divides his narrative into "I: Justine" and "II: Claire," the names of two sisters played by Kirsten Dunst and Charlotte Gainsbourg, respectively. There's the predictable trope of the sisters being psychological binaries, an arthouse fetish that is by now old as dirt and that used to hint at auteurs like Bergman and Antonioni feverishly dissecting the female psyche but now often resembles a cop-out for a director who doesn't feign to understand how a woman's mind operates in the modern world.

Fittingly, Melancholia works best in its second half when Von Trier has all but abandoned introspection and obliterated the sanity of his leads. That's when the film starts aiming for the jugular and stops pretending to isolate its characters in a context that resembles real life. The latter is reserved for the first half, a wedding-from-hell scenario that hearkens - likely deliberately - back to 1998's The Celebration by Von Trier's Dogme colleague Thomas Vinterburg, by all accounts a superior anarchic outburst of familial tensions. Emerging out of the grandiose prelude, Von Trier's wedding narrative is souped up with jittery cameras and radically compressed perspectives to intentionally jar the viewer out of swoony stupor, regardless of the emotional texture of the scenes themselves. Unfortunately, the first scene Von Trier shows is a rocky attempt at comedy wherein Justine and her newlywed Michael (Alexander Skarsgård) shout in vein at their limo driver who can't seem to parallel park. The wide gap between style and content is surely one of Von Trier's many ill-conceived Brechtian devices, but it serves more to discombobulate the viewer's stomach than to actively foreground the chaos to come. Michael will soon be derailed out of the picture as Justine's mental illness takes the fore, and in doing so the rudimentary shaky-cam approach starts to find its footing: Von Trier seeks out the petty smirks and backhanded maneuvers that form a foundation for Justine's depression, and it starts to make sense; the people surrounding her (Charlotte Rampling as mother, John Hurt as father, Stellan Skarsgård as boss, Udo Kier as wedding planner) are all so cartoonishly rude, immature, and clueless that no relatively sane individual could stay with them for long. It's for the better that Michael's gone, and Claire's husband John (Kiefer Sutherland) ought to find his way out too.

Not that it matters, because everyone in Melancholia will be exterminated on and offscreen by the destructive finale of the film. Von Trier has always been at his best when dealing with ugly, extreme emotions (fumbling, of course, with the subtleties of human behavior) and the sci-fi scenario looming heavily over the characters - planet Melancholia is on a collision course with Earth - provides what is perhaps the perfect route to this emotional spectrum. Claire's herculean anxiety in the face of this perceived apocalypse, despite her astronomer husband's unconvincing declarations that Melancholia will miss Earth, is the focus of the second half, while Justine approaches a catatonic bliss at the mere thought of nothingness. Meanwhile, Von Trier orchestrates the growing disparity between the sisters' mental states with giddy stylishness, suspending the four actors - Sutherland, Gainsbourg, Dunst, and Cameron Spurr, who plays Claire's son Leo - in a Strindbergian, Dreyer-esque, existential black comedy complete with crazed horses and roiling layers of fog. In spite of the fact that the relative complexity of Justine's psychology is effectively stomped out by a line of dialogue about how "she knows things," or something, the effect of all this is hypnotizing. Von Trier's reliance on a DIY astronomical gadget concocted by little Leo out of metal wiring brilliantly elevates the tension as the mysterious planet nearly misses and then returns to Earth.

Melancholia is Von Trier's second quasi-autobiographical study of depression in a row, and with its final annihilation of the planet we live on, it stands to be miraculously bleaker than the pitch-dark Antichrist. The only perverse hope to be found is the supposed ecstasy that Justine achieves in putting a period on all things. Perhaps no director could entirely pull off making this small celebration convincingly triumphant, so it's remarkable that Von Trier manages to convey the ounce of euphoric grandiloquence that he does in the final back-and-forth of stirring close-ups, easily the film's best and most emotionally rich scene before it settles for an aggravatingly CG-laden money-shot of the Earth exploding around Justine, Claire, and Leo's triangular final dwelling. This is the most direct and unflinching capitalization on the climate of fear mounting around the allegedly incoming 2012 apocalypse that we've yet seen, and though I'm not ready to clasp hands with the devil the way that Justine does, Melancholia certainly evokes the soul-shattering intensity that such a cosmic event would inspire.
Posted by Carson Lund at 12:06 PM

Hey Carson. How's it going?
By your review, not so sure where you stand about the film. I think all of those words of extreme emotions that Von Trier is able to draw out from it's audience applies here in every sense (ecstasy, fear, etc.)
You said it seemed bleaker than Antichrist. I'm not so sure. When I finished with antichrist, it left my mind quite blank. With Melancholia, I'm not so sure how to explain this, but I couldn't stop smiling. Wasn't so sure why, but I was excited about the experience. I definitely thought a bit about the tree of life, not only because of the cosmic montages, but because it does, though not so thoroughly, tackle themes of existence. Malick used a different approach: nature and grace. Von trier, on the other hand, has Justine and Claire.

Andres, thanks for asking (and commenting). I'm doing well.

It may be unclear exactly where I stand on this film because I'm decidedly conflicted. I love so much of what Von Trier does and loathe the rest of it. While I appreciate that Von Trier is able to inflict these powerful emotions, I think that often times it seems like more of a gleeful punishment than necessary emotions. In other words, Von Trier makes absurd narratives to justify these feelings.

I should also add that Melancholia's bleakness had little to do with my feelings walking away from the film. Bleakness is all well and good, and you're right, can make a viewer paradoxically happy. What I objected to more was the lackadaisical filmmaking and some of the deeply cynical perspectives on life, which seemed cruel and unwarranted. While it shares superficial similarities with Tree of Life (as many films this year do), it's kind of its binary. Malick sees the ugliness and evil in the world and still celebrates it. Von Trier, sympathizing with Justine, sees that same ugliness and gives up; he hates the world, and creates a reason to destroy it. He tries to see Claire's angle, but ultimately feels it's silly and self-absorbed.

Hey, I just saw your response.
I just wanted to add that my reaction, wasn't necessarily in response to the bleakness of the film, but more to the beauty of it. You mentioned that Malick celebrates an imperfect world, and though not quite to the same extent, I think von Trier shows a little bit of that same celebration. I say this because of the specific use of beautiful shots of the actual moment of impact. This, as much as it is horrifying, is a beautiful moment in the film. I think my ecstatic response to the film was mainly due to the very calculated beauty of what I had seen on the screen. Even though he pities Claire and everyone with that perspective, I wouldn't say he is as pessimistic as Justine either.