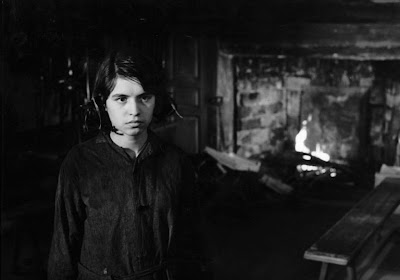 Not One Less (1999): Despite his activist aspirations, Zhang Yimou just ends up generalizing notions of rural poor and urban bureaucracy to muse on the age-old "triumph of the human spirit" platitude. In doing so, Zhang only dehumanizes the destitute and loses sight of any tangible specifics. A social problem film should not end with this kind of crowd-pleasing, heart-warming crescendo; it should conclude ambiguously, incompletely, to emphasize the fact that these issues of poverty and the national exploitation/disregard of it are not in any way solved. It's pretty disappointing, because Zhang knows how to construct a drama fairly well, even if his pretensions to vérité social realism feel contrived. Not One Less is at its best when it's not hammering home a didactic and obvious message and Zhang's simply watching the chemistry between his many child performers, who are the real core of the film.

Mouchette (1967): The opening minutes of this classic are pure Bresson: he shows a man in the forest looking on as another man sets traps to catch rabbits and birds. In only a few descriptive visual fragments (close-ups on eyes, on hands, on the behaviors of the woodland animals), Bresson mythologizes the act of voyeurism and conveys deep guilt. This gets to the heart of his strength in dealing with the spiritual consequences of actions, so often telegraphed in the fewest number of shots yet pervading throughout the course of an entire film. The individual guilt in Mouchette is gradually extended to a collective failure to recognize the indecent treatment of the young titular character. There's always something enticingly cryptic and almost cubist about the films during this period of Bresson's career (Pickpocket, Au Hasard Balthasar) - his summit as an artist - wherein gestures are defamiliarized by the camera but add up to some oddly discernible whole. Critics often point to The Devil Probably and L'Argent as Bresson's most ascetic work, but it's here where behaviors seem most alien and stripped-down, and it's also where the human soul is made visible.

Khabi Kushi Khabi Gham... (2001): Even Ophuls would have been impressed with the vigorous use of the moving camera here. Big-name Bollywood helmer Karan Johar toys around with every variety of dolly, crane, and jib he can get his hands on to highlight, underline, embolden, and ultimately scribble out all the loud, overwrought emotions of love, separation, and reconnection in this four-hour family epic. K3G, with its grandiose declarations of filial piety stylized as the kind of melodramatic camp parodied in Tim and Eric Awesome Show, among other things, forces a shifting of our viewing preconceptions in order to fully digest the utter sincerity of Johar's messages. Once digested, it's a fascinating, troubling film rife with abysmal ambiguities in its relationship to the capitalistic West; one moment, it's glorifying the accumulation of British wealth and materials (Johar includes some montages that play like TV commercials for not one, but several major fashion companies), the next it's demanding a purification of the Indian people, a return to the mainland values. Furthermore, its debt to Western culture - already strange for a film about the reintegration of the diaspora with India - bears no temporal specificity, with Johar's general mise-en-scene refracting classical, Technicolor, Sirkian Hollywood and other passages echoing Mean Girls and Legally Blonde. With all this directorial ambivalence, Johar sure has a firm grasp on one thing: the movement of dancing bodies in space.

The Clock (2010): Like many others, I'm pretty stunned by Christian Marclay's towering museum exhibition The Clock, a towering monument to time and cinema. My first reactions were purely practical. How did Marclay manage this feat? How much time did it take? Did he survey everything from the aggregate history of film and television to find those tidbits that expressed, somewhere in the frame, the time of day? Beyond that, how did he begin to assemble what feel like miniature narrative and rhythmic movements within the perpetual onslaught of varied media? Sure, sometimes Marclay's tempo is sketchy, but the guy is allowed a few hiccups in 24 hours if some filmmakers manage to make an hour and a half an intolerable disaster, right? The Clock is a compulsive viewing experience that simultaneously alerts the viewer nearly every second of the irresolvable slowness of time and the mysterious elasticity of it. Somehow you can lose sense of real time even as you're experiencing it directly within the theater, and miscellaneous characters from narrative history seem perplexed by this paradox as well ("What are you staring at?" one man says, to which the other responds, "Time", or, in another instance, "Describe this time machine of yours. How does it work?") I can't think of a film in recent memory where the gap is so narrow between simply enjoying the film for its gleeful pop-cultural sampling and thinking seriously about its endless conceptual inquiries. I'll be heading back to the Museum of Fine Arts for a few more hours with this daunting achievement in the near future, and may write more about it.
Posted by Carson Lund at 11:55 AM