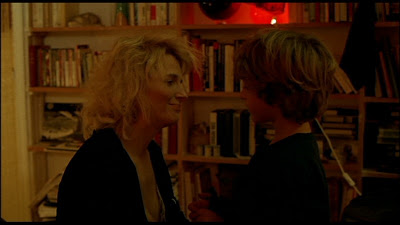 The titular balloon from Albert Lamorisse's veritable French classic The Red Balloon has aged well. In the approximately fifty years since its initial appearance as a shy, impressionable, lonely orb of red plastic, it has grown to be as wise and observational as its new director, Hsiao-Hsein Hou. Hou's own spiritual reprise of the quiet coming-of-age tale, Flight of the Red Balloon, casts the balloon in an entirely separate role. In Lamorisse's film, the balloon was a humanized emblem of companionship and creativity. In Hou's, the object's precise meaning is elusive as it plays less of a narrative role than a metaphysical one, hovering haphazardly over the earthbound dramas that are the film's primary focus and only having seemingly tangential significance. Hou, who controls the film with Zen-like patience, prefers to let the balloon gather its import on a scene-to-scene basis, resonating in new, distinct ways as his loose narrative gently explores hectic adulthood, jostled childhood, nostalgia, and the very mechanics of filmmaking in the guise of a director surrogate who is making her own intentional remake of The Red Balloon. This is potentially overwhelming, convoluted material, but Hou's supreme lightness of touch makes it not a cerebral effort but a sensual one, ebbing and flowing in ways that don't require heavy-handed analysis.

The young Taiwanese woman, Song (Fang Song), who is making her own digital version of The Red Balloon has come to study film in Paris and has taken a job on the side as the daytime babysitter of Simon (Simon Iteanu), a content 7-year-old with a swamped mother. In the opening shot, the closest thing to a direct lift of a scene in Lamorisse's film, Simon is dangling on the railing of the Metro station, pleading for the floating red balloon to return home with him. As if to announce the film's fundamental distinction right off the bat, Hou has the balloon not follow Simon. Instead, it has a mellow, indifferent air, justified in the subsequent credit sequence set to elegiac piano music. The balloon has not an individual role linked to youth but an egalitarian one that supports the characters of Song, Simon, his mother, and the various explicit and implicit figures. A divorced mother of two and a passionate voice actress in a local marionette production, Suzanne (Juliette Binoche) mounts the film's most accessible plot points (an anger towards a neighbor/friend who does not pay rent, various quotidian struggles such as scheduling piano lessons, explaining her plans to Song, and arguing with her absent husband who has relocated to Montreal to write a novel and shows no signs of returning) and ushers in the bulk of the film's ensemble (the irritating tenant Mark (Hippolyte Girardot), a visiting Chinese puppet master, a pair of hulking, modest piano-movers, and the (mostly) offscreen presences of both her secretive husband and her estranged daughter Louise (Louise Margolin), who is studying in Brussels and only appears in the film via a seamlessly materialized memory that Simon describes to Song).

By building up a patchwork of subtle tension and conflict, The Flight of the Red Balloon achieves the texture of everyday life. Hou's narrative concerns, which are slight to begin with, remain elegantly understated as a democratic weight is assigned to the various mini-stories. All of this is showcased exquisitely in the film's predominant image, a simple wide shot of the family's cluttered Paris flat that Hou keeps returning to. On the left is the door and a packed shelf of books extending outside of the frame that Suzanne ostensibly never would have enough time to delve into, in the middle is an all-purpose dining table, and on the right is the narrow kitchen illuminated by a gorgeous stream of natural light flooding in from the window. It feels as if half of the film is spent observing this segmented domestic sphere, divided up to visualize coming, going, resting, cooking, and zipping around with purpose. Meanwhile, Hou's camera just sits in one spot, occasionally floating from side to side at a pace far too leisurely to accommodate the circus of workaday chaos, which balances the hysterical restlessness of Suzanne, the youthful time-killing of Simon (playing gameboy, drawing), and the quiet introspection of Song, who is perpetually seated at the center table reviewing her daily footage or dreaming up new scenarios in which to place Simon, the balloon, and the man in the lime green suit (to be digitally erased later). It would be disingenuous to overlook how technically proficient these long, often busy sequences are though; in an orgiastic bit of restraint, Hou unfolds one of the lengthiest takes of the film that casually observes several dramas at different intervals (Suzanne's yelling at Mark, her subsequent calm chat with Song, the clatter of the piano tuner in the foreground, and Simon's omnipresent rustling). It's a tumultuous mise-en-scene that manages a distinct poetry thanks to Hou's characteristic economy, the way he willingly has these components butt heads yet is equally prepared to allow a potentially compelling subject to wander offscreen. 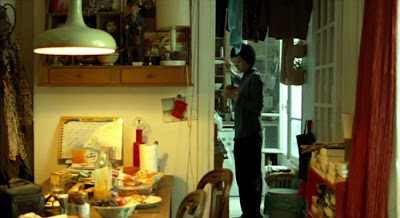 None of this is to suggest that The Flight of the Red Balloon is a relentlessly boisterous, hyperactive endeavor; in fact, some of its best moments lie in the relative silence, the pauses from the "action". Like one of his prominent filmmaking fathers, Yasujiro Ozu, Hou routinely resorts to variations on the proverbial "pillow shots". Many times this entails dreamy interludes studying the uncanny soaring of the red balloon, shown in both long shots and with a tight, moving camera. But it also refers to the numerous instances of urban minutiae that Hou likes to turn his camera towards. In one compelling cut, he moves from the interior of the apartment room to the galloping shadows on the ground below a carousel, then the small metal ring at the edge that the riders interact with on their way around. Given the fact that it's Hou's first feature outside of East Asia, it all gives off the impression of an ecstatic outsider's perspective, devoid of cliches (and Paris is certainly full of those) or oversimplifications, which mirrors Song's own cultural assimilation through her Red Balloon remake. Another scene of blissful peace and quiet involves Simon's memory of jaunting around Paris with his sister Louise, which gradually transforms from verbal recollection to literal re-staging. Here Hou makes generous use of visual reflections and layers, shooting the action diagonally through shiny windows to emphasize the coexistence of past and present.

So where does the balloon come into play in this gentle, stoic drama whose chief concern appears to be people and their relationships? It seems to underline, in one big swoop, each of the film's major themes: nostalgia (in its reference to an earlier iteration), the transience of life, the ongoing impact of the past on the present, and the simultaneous melancholy and beauty of the everyday. The balloon hovers alone, but its luminous red sheen remains charming, just as Simon is for the most part, due to forces outside his control, incapable of a perfect childhood, yet he maintains a mask of complacency. And the presence of the balloon also reminds the viewer of Hou's enlightening worldliness, his openness to all forms of cross-cultural artistic associations. As witnessed in Binoche's impassioned recitations of the ancient Chinese story, where the dramatic bombast onscreen is countered by Hou's extended, unadorned gaze, nothing - not even a flurry of conflicts and obligations - threatens to dilute the timeless immersion in art.
Posted by Carson Lund at 6:38 PM

You express so well a lot of what I got from this film.

"As if to announce the film's fundamental distinction right off the bat, Hou has the balloon not follow Simon. Instead, it has a mellow, indifferent air, justified in the subsequent credit sequence set to elegiac piano music."

Yes, elusiveness is one of the major colours of the film's palette - of time, of love, of life.

I find it hard to tie down(!) the balloon to any symbolic meaning. It acts to me as a counterpoint, a calm balancing of what is going in within the family.

Maybe it's a comment on their lives in that it may seem to have a mind of its own but it is only being carried on the wind. Suzanne and Simon are too lacking in full control. Only they are not peaceful about it.

This film is one of the best of the past few years. I wrote a short mood piece on it here:

Stephen, I always love these short pieces you write, which are less formal essays than personal poems. You wonderfully nail down the vibe of the film, which can't be over-analyzed. It's light and sensual.

I think you're correct that the balloon is to some extent a simple grace note, a counterpoint, but I can't help but think it possesses some symbolic meaning, as I elaborated in my final paragraph. For me, it's similar to the way that Ozu uses trains or clothing lines as accents, in that they are always inexorably moving with the flow of life. In this way, it provides a somewhat sad note, suggesting that Simon or Suzanne's problems cannot be corrected in the present, only in the recollected past.

Thank you very much indeed, Carson. That's what I aim for. There are some films that need a certain approach (from me) and others a colder, more analytical one.

When you try to put across the feel of a more "sensual" experience I suppose you put across some of yourself too. I like the term "personal poem"

"For me, it's similar to the way that Ozu uses trains or clothing lines as accents"

"It provides a somewhat sad note, suggesting that Simon or Suzanne's problems cannot be corrected in the present, only in the recollected past."