The mountain of hype that has met Oren Peli's directorial debut Paranormal Activity, while illustrious in a marketing and financial sense, is by all means not a positive factor for the work itself. With outrageously bombastic sloganeering riding on its coattails ("the scariest film of all time"), suspicion inevitably arises: "could this really be that scary?" and then, the negative end of that, "i'll bet it's not". Thus the film is being seen under highly unique and artificial circumstances. People are going either to prove the hype wrong or they are going with their belongings strapped tight to their side, preparing for a roller-coaster ride rather than a movie. Interestingly, this is a film that was not even produced this year or last year but two years ago and has only tightroped its way through our prudishly selective mass media environment via some oddball marketing techniques: screening only in an absurdly limited number of theaters around the world, its website urged the film's few spectators to begin a word-of-mouth assault that would ultimately lead to individual areas voting online for the film to be shown in their region. Paranormal Activity has, through the magic of mass curiosity, arrived in Boston, and I have attempted to view it in as neutral a mindset as possible.

Whether expectations bubbled up from my subconscious during the screening or not I cannot tell. One thing is clear though: this is not the scariest movie of all time. In fact, it's hardly a movie worth anything more than an ephemeral thrill, which one could argue is the inherent point of horror films anyway. At the same time, I wonder if Paranormal Activity should be judged against this yardstick at all. There is nothing internal in the film that purports itself to be the "scariest movie of all time"; such a notion is purely a product of external forces such as media moguls and populist critics. In truth, the movie is surprisingly modest in its execution. Peli doubtless had any steep ambition while making it besides his own innocent desire to unsettle audiences deeply. On this more equal playing field - which is how all films, horror or comedy, noir or documentary, family-friendly animation or avant-garde piece, should be assessed - Paranormal Activity is a success.

Well, just about. Yes, Peli's film is strongly affecting, but it is also a mash-up of nearly all of the horror conventions in the book, a violation of the rule of ambiguity, and a big unbelievable gimmick. Somehow this bizarre fusion has escaped many who have awkwardly used the word "original" to describe the film's technique. The most gaping proof to the contrary is the blatant congruency to The Blair Witch Project, another home-video nightmare that generated nearly as much excitement, but also to several other similarly rough-hewn projects that have popped up in recent years (Cloverfield, Quarantine, [REC]). Instead of focusing on a group of amateur filmmakers making a documentary in the woods, Paranormal Activity turns its (or, to be exact, its central character Micah's) gaze towards a young engaged couple living in a new home in San Diego. Thanks to Micah Sloan and Katie Featherston's (their real names parallel to the names of their characters to heighten the perception of verisimilitude) careful understanding of realistic dynamics, their relationship is believably tender. Mystery enters the story through Katie, who has, for as long as she can remember, been haunted by terrible sights and sounds in the night. 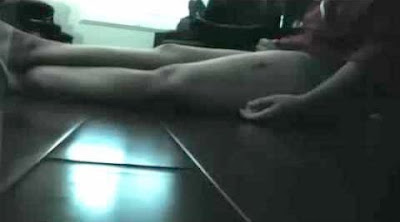 Once the presence begins intruding on Katie's life again, Micah, a giddy enthusiast of technology, obtains a night-vision camera to document any strange happenings in the middle of the night. He also closely analyzes the audio track produced by the camera. Peli gradually builds up a tremendously effective repetition by placing the camera in the same corner of the room for each night we see the two fast asleep. First a thud awakens them. Then a much louder, almost bestial crash. Then the two discover a burnt photograph of Katie as a child which she claims to have not seen for years. Much before this point, Katie urges Micah to just accept the fact that she needs the help of a professional demonologist. This is where we must suspend our disbelief most jarringly. Micah takes masculine bravado to a whole new level of naivete and indeed idiocy, by foolishly insisting he can "take on" the demon, presumably physically. We are supposed to believe Micah when he tells his girlfriend that he loves her so much that he can solve the situation.

The source of these sights and sounds is unknown to us, but it also seems to be unknown to the filmmakers. Most obviously, the title itself speaks to the phenomenon. There is paranormal activity going on between Katie and the twilight zone, whatever the multiple potential meanings of that are. Other evidence points us towards a more personal realm, as if there truly is a demon of her past, metaphorically and literally, that yearns for payback for something Katie did at a young age. Then, spontaneously, exorcism is tossed into the mix. This is Peli's biggest head-scratcher; all of a sudden he has gone from referencing the unexplained to referencing something that is explicitly ecclesiastical, rooted directly in religion, and never once do we get any inkling as to what Katie's religious background is, if there is one at all. Part of it speaks to Peli's overt desire to be enigmatic, which is admirable, but it is also so open-ended that it fails to encourage interpretation. The attempts made at discombobulating the root of Katie's problem overstep their mark, winding up annoying the audience rather than mystifying them.

For all its missteps though, I do disagree with the macho punk behind me who, during the uneasy stream of black leader that concludes the film, rudely shouted "that movie sucked!" For what it's worth, Paranormal Activity could rather obliquely be called a "minimalist" horror film. In an age where most horror offerings come with a large helping of shock-for-shock's-sake gore, most of Peli's horror occurs offscreen. What is scariest to him is what is not seen, and often times only what is anticipated. Moreover, some of Paranormal Activity's most genuinely spooky moments have only tangential involvement with the force in the house at all; for instance, during one night, we watch Katie stand up from bed in a somnambulistic manner and proceed to stare at her fiancé for what seems like 30 seconds, until we notice the timer in the corner of the screen fast forwarding by the hour. The aggravating finale of the film is in sharp contrast to scenes like this, scenes that potently reveal Peli as a director who understands how to create terror, even if it is all just for that, a gimmick wrapped up in vacuous potential explanations.
Posted by Carson Lund at 12:53 PM

I saw the film a few days ago. It was better than I expected (since I hated Blair Witch) but nothing too remarkable. You sum it up nicely.

Yeah, I agree. I didn't like Blair Witch. This film was far more worth it.