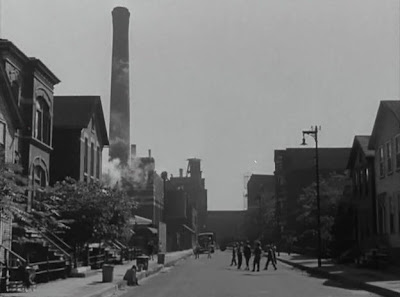 When taking into account the widely acknowledged schematics of "film noir", Jules Dassin's influential procedural drama The Naked City seems not to fit at face value. However, if one takes noir in the grim, direct, and realistic sense of the word, the film does not seem too distant from the trend. This is because Dassin separated himself from the influx of glossy studio-produced dramas of the period and created a film that was shot entirely on location in New York City. In order to capture a documentary-like immediacy, Oscar-winning cinematographer William H. Daniels went to the great length of lugging his bulky camera inside a car with tinted windows, explaining some of the perplexed glances the onlookers give to the focused actors.

Dassin tells the step-by-step story of the murder investigation of Jean Dexter, a popular fashion model in the country's most vibrant city. On the prowl for suspects are Lieutenant Muldoon (the prolific Hollywood actor Barry Fitzgerald), his right-hand man, Detective Jimmy Halloran (Don Taylor), and the remainder of steadfast crew members. Dassin is relentlessly economical in his delivery, never hanging for a moment on a scene inconsequential to the investigation, which includes a crooked jewelry business, seemingly unlikely connections, and jealousy and lies of all sorts. Unfortunately, the film dips into some lousy characterization, a result of the story's matter-of-fact, newspaper-like presentation (famously deemed by radio-personality-turned-producer Mark Hellinger as just one of the "eight million stories in the naked city"). Muldoon, despite being played splendidly well by Fitzgerald, verges frequently on caricature; he is a classic hard-boiled lieutenant committed wholly to doing his job and earning his salary. Halloran is broadly sketched, and a scene involving him at home with his wife before being ripped away by an important business call feels like a strained attempt to toss in some depth to his character, and the fact that he's young and married and juggling several commitments isn't given any future resonance.

However, where the film may lack in emotion, it shines in verité quality and deft pacing. Dassin's direction is taut for its entirety, and in the end, memorably exciting. He treats the city as a microcosm of society as a whole, where truth is continually elusive through a number of subjective views. The images, albeit not as flashy or atmospheric as some of the other 40's productions, are - due to practical reasons - flooded with sunlight, creating harsh snapshots of the busy daytime streets of the Big Apple in the mid 20th-century. The Naked City's influence on television shows like C.S.I and Law and Order remains noteworthy, and the film still has the ability to lock viewers in.
Posted by Carson Lund at 7:34 AM

Your scores for your reviews make very little sense when taken in with what you write in such a long winded and masturbatory way.
This film certainly is a noir by the way as noir was very much influenced by the Italian documentary style. There are many other film noirs in this style, and you should probably do some more research before you post anything else. KTHNX LOLZ.

Roger I along with everyone else can care less what you think about this blog. You just sound like a crabby little child who is overreacting to the 7/10, which is still a good rating. If you want people to ever take you seriously then stop saying that KTHNX LOLZ crap. I've seen your other immature comments on this blog and I'm fed up. SO STOP GOING ON THIS SITE IF YOU DON'T LIKE IT! It's as simple as that...idiot.