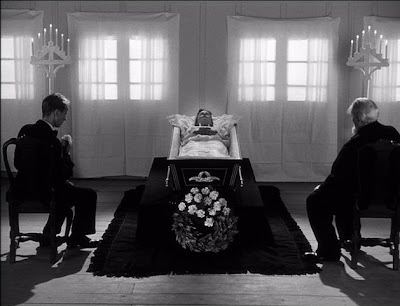 After viewing two Dreyer films, I'm starting to understand the necessity of his plain and formalized cinematic language. It's certainly not a style that grabs your attention or demands praise. This puts the Scandinavian director's body of work close to two other understated masters who are thought of as the ultimate examples of truth and humanity in film: Robert Bresson and Yasujiro Ozu. With Vampyr and now Ordet under my belt, I just haven't been able to find an affinity with the director's films, something that I achieved instantly upon viewing only one Bresson and Ozu film respectively.

Ordet is the most blatant study of religious faith ever recorded on film. It tells the story of the Borgen's, a Danish family living on a farm who inevitably build towards a spiritual crisis. Each character undergoes a significant transformation in the film: the granddad Morten Borgen begins as a skeptic of prayer and ends as an embracer of the "warmth of life"; the son Johannes believes for a great part of the film that he is the reincarnated Christ and ends freed from his nearly insane behaviors; the son Mikkel begins as an agnostic and ends with perhaps the strongest faith; Anders Borgen clings to the wish of obtaining the tailor's daughter and eventually is fulfilled, and the tailor has an organized fundamentalist belief which he reverses considerably, finally allowing his daughter to marry Anders. These metamorphoses are the foundations of the truly miraculous climax that ensues when the daughter Inger, wife of Mikkel, is rebounding from intense labor.

Although Ordet's ending is magnanimous in its optimistic, faith-supporting religious appeal, I found it to be unrealistic. It was rewarding and moving from a plot standpoint, but it is seen better as a allegory on the excesses of faith than as a palpable occurrence. Nonetheless the film is a complex, sophisticated work of art in light of its incredibly dry but focused vision. Dreyer strips his locations down to the bare minimum, revealing mainly white walls and mundane portraits on the walls (which curiously always seem to mirror the people who own them). He avoids music and manipulative cutting, resulting in hopelessly austere camerawork that usually involves one shot per scene. The visual style that I find has existed in both Vampyr and Ordet is mainly mid-level compositions that continually pan around the room to observe the action. I find myself wishing Dreyer would frame more delicately. I also believe that Bergman's The Seventh Seal was a far more interesting religious exploration, with the use of a pessimistic mood and beautiful cinematography. However, one can't deny Dreyer's place in the maturation of film as an art.
Posted by Carson Lund at 9:06 AM