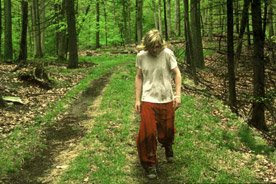 The third film in Gus Van Sant's trilogy touching on the idea of death is a trivial one. It is a muddled observation of the final days of a Seattle based grunge rocker, a screen representation of the Nirvana singer Kurt Cobain. However, the main character is never tagged as Cobain. In fact, his name is Blake. It's a mystery to me why the film wasn't just officially set to the well known disturbed rock star. Perhaps Van Sant could not gain rights to the use of Cobain's name and image, so he created an exact replica under a different name. Nonetheless, the film achieves what was likely the real rhythms of Cobain's final days before his inexplicable death.

The audience is propelled into a forest retreat where Blake wallows in his own crisis. He mutters to himself in an unrecognizable manner through the woods in the opening shots, and finds himself beside a small waterfall where he proceeds to strip down and dive in. In these moments, Blake appears to be at his most carefree. Once back at the cavernous stone house he stays at with his friends, he looks like a mess. Unfortunately, the intent of the film turns into a bit of a mess too. It is at once acutely centered on Blake's thoughts and actions, but then wanders aimlessly with the people surrounding him. The impact of a scene when he changes into a woman's dress and trudges around a sunlit room to the accompaniment of a Boyz II Men music video cannot be properly measured alongside scenes such as the arrival of two religious promoters to the house, or the awkwardly placed homosexual scene that has become a Van Sant tradition.

The film feels like a series of disjointed vignettes in which each tedious shot represents a snippet of Blake's increasingly depressing life. This is not to say that I was bored with the lengthy images (as I am continually enthralled by Van Sant's minimalism); I just thought that the overall juxtaposition of scenes left much to be desired. There are indeed some images that are memorable, such as the snail-paced dolly out from the house window as Blake plays a looped musical piece, or the familiar tracking shots behind him. I also won't hesitate to admit once again that Van Sant is an extremely tasteful filmmaker. His prominent uses of natural sound and his firm grasp of a declining mood perfectly compliment the simplistic style that Gerry and Elephant showcased. Unfortunately, Last Days was off the mark a bit, and was there wasn't much to absorb from it morally.
Posted by Carson Lund at 9:01 PM

I would think he didn't actually use Cobain as the main character becuase he intends to somewhat remove the story from the actual tragic event and instead just reference it, showing these things can happen to anyone. Elephant was also heavily based on a true story but created into a fictional piece, however I can't comment on Gerry.

"Maps" has it right. All three films in the "death trilogy" are based on real events but are somewhat removed from them, including Gerry, which is a kind of "ripped-from-the-headlines" movie about a real murder. The goal of these films is to remove the sensationalist overtones and tabloid shrillness that usually accompanies these stories, and to get at the essential core of the story rather than getting bogged down in specifics, in rumors, in tall tales. The shambling anti-hero of Last Days is an everyman who could be any man, an average guy with a creative gift (heard in the AMAZING noise guitar performance) who can't handle the fame he gets. His mumbling, incoherent dialogue directly connects him to the heroes of Gerry, who are equally incapable of meaningful communication. This is the least of the trilogy for me, but that said it's still a remarkable film.

I viewed this movie as attempt to capitalize off Kurt Cobain's image and cult following. The film was completely removed from the actual details of Cobain's death. There was nothing intellectual about this film, unless you consider wasting 96 minutes of your life watching a Cobain imposter stumble around in a dress intellectual. It was definitely a disappointment compared to Elephant. There were some creative camera angles and beautiful imagery, however. I agree with the two previous commenters that the film was supposed to be emotive in a broader spectrum, rather then relating solely to Cobain. I still found it to be lazy, egotistical, and disrespectful. love your blog, by the way. It exposes me to directors I normally wouldn’t have time to find out about!

Thanks a lot, Haley. I appreciate it. I agree, it's the lesser of the three films, but I'm curious: if this film is lazy, how are Elephant or Gerry not? Not to mention I've never heard Van Sant described as egotistical. He's an extremely modest director in my opinion. Thanks for the comment, I love the feedback.