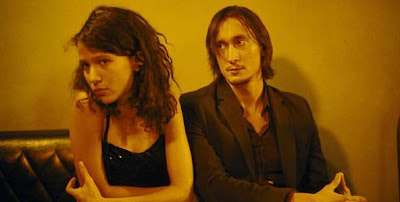 Claire Denis' 35 Shots of Rum - like Hirozaku Kore-Eda's recent Still Walking - uses a beloved Yasujiro Ozu film as a jumping off point but ultimately morphs to its own context and sensibility. The story of Lionel (Alex Descas) and Joséphine (Mati Diop), an intimate father/daughter duo living together in a Paris apartment building mirrors that of Shukichi (Chishû Ryû) and Noriko (Setsuko Hara), a similarly affectionate but physically closer relationship evolving in Tokyo; both tales contain their fair shares of trains and reveal the weight of passing time as it influences the lives of family members. I won't sing about the ways in which Denis deftly reintegrates the elements of Late Spring into 35 Shots of Rum, as if the film can only be seen as a particularly bright spot in a long shadow of greatness cast down by the monumental Japanese work, but instead take it as the rich, plaintive gesture that it is, a singular entity as much as it is an homage.

Much has been made of Claire Denis in recent years, especially on The Auteurs Notebook and in the BFI's Sight and Sound Magazine, where Nick James declares her the finest filmmaker in the world. 35 Shots of Rum comes directly before her most recent fest-film White Material and it potently evokes a mood of tranquility. It eases us ever-so-gradually into a not-so easy sentiment: that we must find peace in our own routines and submit to the fact that the lives that run beside ours do not run on parallel tracks, that they criss-cross, intervene, and sometimes lead to isolation, as we see in the opening frames which assume the rickety point-of-view of Lionel as he yields to his occupation as a train driver. Shortly thereafter, he reunites with his daughter Joséphine in their apartment for a quiet night of brief expressions of admiration and modest downtime. A pattern is established that the film effortlessly maintains of work in the day and home at night, a seemingly endless systemization of separation and reconvening.

It is only through the passing of time that this pattern is mildly obstructed, ushered along by two figures - Gabrielle (Nicole Dogue) and Noé (Grégoire Colin) - who tug lovingly and desirably at our respective main characters. Gabrielle is an ex-lover of Lionel and also acts as the quasi-mother figure for Joséphine, and Noé is a young man living alone on a floor above them. Together, the four presume the awkward stance of a real family, with the two not linked by blood filling in the holes that are left enigmatically gaping. Not until the final quarter of the film does Denis subtly reveal to us hints of the mother through dusty material remnants in the apartment, and the exact state of affairs that defines her absence is left unanswered, just as the tangible course of events that lead Lionel and Joséphine to tension remains flexibly open to interpetation. Those familiar with Denis' work will acknowledge these ambiguities as par for the course; she never once judges her characters but at the same time does not take this opacity to an extreme, providing us evocative evidence in the behaviors of characters that suggests potential inquiries. 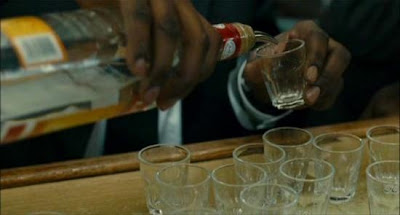 35 Shots of Rum is formally splendid and has an admirable inclination not to ogle at pleasurable images. Instead, Denis' exquisite cutting rhythms create a precise flow that matches the interconnecting nature of the characters and constructs what is specifically a montage of abstractions. Time and space are delicately scattered when Denis promptly excises the the conceivable payoffs of a scene to pursue other plot lines, a move that approximates the abrupt veering of a train at a fork. Even when the four central characters occupy the same space, leaving nowhere for the film to exit to, Denis discovers a way to obscure the ontological surfaces of the scene. Most memorably illustrating this is the rainy night that is in some ways the crux of the film. The four characters are heading to a concert when their car breaks down en route, leaving them defenseless in the pouring rain. During the drive there, Denis resists all-encompassing views of the car, instead shifting rhythmically between tight close-ups of their lowly lit expressions as the droplets of water on the windows blur the outside world they are contained within. The "family" then makes a spontaneous decision to have a rendezvous in an African restaurant on the side of the street, and once again Denis limits her vision to the central figures in comfortable but indecisive motion as they sway to the music in what is surely one of the most sublime renderings of the wit's-end-waltz-scene I have ever witnessed.

Moments like these stand out beautifully in what is otherwise an extremely consistent film, absent of many significant tonal or narrative leaps (besides a particularly unexpected and chilling moment of gore when Lionel confronts a dead friend in a train tunnel). Denis has an elegant way of suffusing profundity into the elliptical gaps where more conventional directors would resort to an emotional apex, such as when Joséphine arrives at Noé's door after a tension between the two in a previous scene. We expect a flush of emotion culminating in a kiss but instead get a cut to a new scene, letting mysteries regarding what happened simmer over. Similarly, one could argue that the final scene is a more fundamental example of this restraint; the characters dress up and Joséphine dons her mother's necklace, but the true content of the sequence is mysterious. Is it a marriage, linking Joséphine to Ozu's Noriko? And if so, for whom? The answers are left within the viewer's own projection, and Denis supplies enough emotion to want to search for them.
Posted by Carson Lund at 12:53 PM