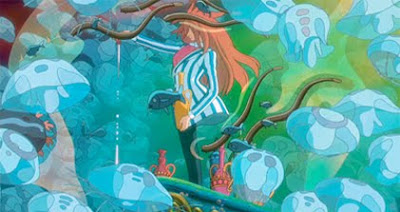 All of Hayao Miyazaki's animated films are ostensibly "for children", but never has that element been as pronounced as it is in Ponyo, an earnestly minor effort about a fish who longs to become human to be with a young boy named Sosuke. In several instances, the film straddles a thin line between genuinely poignant simplicity and twee juvenilia; for proof, notice the film's laughable closing credits, which smash down the barrier in a blaze of Comic Sans type and bouncy pop music that I haven't heard outside of birthday parties for three year-old's. But I know Miyazaki has these tendencies - certainly traces of them litter the sublime Spirited Away (2001) and even the surprisingly heady Nausicaa: Valley of the Wind (1984) - and I've learned to look past them to discover the more furtive merits underneath. After all, were it not for my ardent belief in Miyazaki's artistry, I probably would never bash an eyelid at Japanese anime.

My somewhat clouded response to Ponyo has to do with the fact that it manages to juggle, often times within the same scene, everything I adore about Miyazaki's work and everything I despise about it all in one 103-minute film. For starters, the story: little Sosuke lives with his nurse mother and sailor father in a small village beside an ocean with a vibrant ecosystem filled with unidentifiable blob fish and fantastical reefs. He's a boy who longs for all the excitement and variety of the underwater world and Ponyo - the fish who arrives at Sosuke's shore stuck in a bottle - is a creature who pines for the sobriety and innocence of a human life. Their mutual needs are met when Ponyo licks a wound on Sosuke's finger and unknowingly sets off a mutation that will allow her the ability to vacillate between human and fish, but will also disrupt the balance of nature. Ponyo's potion-making father Fujimoto is the figure who for a moment comes closest to being a traditional antagonist in the film in his relentless search for his daughter, but soon enough we realize his intentions are reasonable. He wants his daughter to be happy in one state or another without destroying the natural order, and the potions he concocts are made in order to combat the omnipresent dumping of human waste into the waters.

The absence of the normal mechanisms employed to further narrative is one of Ponyo's virtues. There is no snarling enemy in the film as usual; instead, all of Miyazaki's characters wind up being multi-faceted in one way or another. (Recall No Face from Spirited Away, who sparked xenophobic shrills in the members of a bathhouse at first but proved to be an honest soul with some common needs.) I admire this magical ability to dredge up a full-blown story out of limited means, and it immediately makes Miyazaki's films distinct from the Pixar and Disney fare, where the trials and tribulations of the main characters are never in question. Ponyo does not always adhere to its plot either, wandering off on tangents meant to revel in imagery or illustrate transient, on-the-fly moments that most children's films leave out. Take, for instance, the quiet moment we share with Fujitsu in his private dwelling as he sifts through potions without doing anything significant, or the prolonged opening montage detailing the kaleidoscopic movement of underwater creatures. As always, Miyazaki's spectacular technical ability astounds us throughout, and in some ways the tranquil setting of Ponyo suits his adeptness with color and liquid marvelously; the sequence where the ocean becomes a writhing animal and Ponyo runs atop the violent waves is particularly a stunner.

If simple charm and visual bravura were enough, Ponyo would be an indisputable success. However, we've come to expect both of these things with Miyazaki's work. The recurring themes are what is especially interesting about his career, but they should warrant a consistent heft from film to film. Here we only get a brief acknowledgment of the dangers of human pollution (a subject that usually becomes, in one way or another, the hefty subtext of his films) and a treatment of parents that is too infuriatingly unconvincing to be taken as a serious critique of Japanese parenting. Also, Miyazaki's trademark tick - having characters directly state their actions and emotions in an annoyingly over-expressive manner - starts to become too necessary to the film's meaning, whereas in the past it could be dismissed as a minor blip shrouding more understated messages. It's as if Miyazaki opted only to delight rather than to challenge, and the hammy wrapped-in-a-bow conclusion further underlines this fact. Hell, the presence of Disney B-listers Nick Jonas and Noah Cyrus as the voices of Sosuke and Ponyo, respectively, is enough of an indication of Miyazaki's tender embrace of whimsical entertainment over environmental polemic.
Posted by Carson Lund at 7:35 PM