Liverpool (2008) A Film by Lisandro Alonso 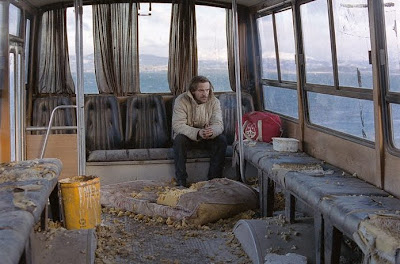 It is a curious thing to be so thoroughly moved by a film that is less an authorial work of art than it is a fact of life, a spontaneous creation devised out of instinct as if a necessary tool for survival. Such seems to be the case with the work of Argentinian Lisandro Alonso, a filmmaker who is resolute in his insistence on a laissez-faire approach, yet deeply impassioned in his curiosity for observing life. The central figure in his latest film Liverpool is not an actor; Alonso found him working as a caterpillar operator, spoke with him briefly while pretending to be a magazine photographer, asked him to be in a movie, which was met with disbelief, and so Alonso returned a while later and persisted in asking him to be in a movie. That Juan Fernandez is a real person stripped from a real environment and not a performer tells a lot about Alonso's desire to approximate nature. Incidentally, Fernandez, playing a silent seaman named Farrel traveling to the southernmost portion of the world, delivers one of the most fascinating performances in recent memory without ever saying or doing anything significant.

Early on in the film, Farrel leaves the cargo ship he is stationed in to travel to Tierra del Fuego, the diminutive farming village he grew up in but has not returned to for many years. This introduces a pattern the film gradually creates of leaving spaces empty and moving on to a new setting. The entirety of Liverpool involves movement from one place to another yet it feels perpetually on the brink of greater movement, indicated by Farrel's nervous fidgeting when positioned alone in a space. He is constantly on a path, but the destination of this path becomes more and more ambiguous once we observe Farrel leave Tierra del Fuego as soon as he arrives. His estranged mother is bedridden and forgetful, shrugging off Farrel's attempts to jog her memory of his identity. He only exchanges a few words with his father and otherwise discovers his disabled daughter that he had never met. The snow-covered village is nestled between foggy hills so as to insulate it entirely from the outside world. The few people who exist there, blank and beset by everyday chores, are mirrors to their extreme landscape.

Left fulfilled but ultimately unsatisfied, Farrel leaves the village abruptly. But, in a move that takes Alonso's cinema in a new direction, the camera remains static as he trudges away. Once he's about as far from the camera as any of Alonso's protagonists, the film cuts back into the home of his family. Alonso abandons Farrel and completes the final twenty minutes of the film in Tierra del Fuego; "he's always leaving, so then he leaves the film," Alonso says plainly. This is not the only difference between Liverpool and his previous features though. Los Muertos followed its similarly unreadable protagonist unceasingly through a homogeneous environment, hardly ever letting him out of the frame, whereas Liverpool seems interested in more than just its enigmatic central figure. It is also consumed by the physicality of spaces, both interior and exterior, on ocean or on land, at night or during day. There is overwhelming authenticity in the objects positioned in the frame, the aged paint on the wall, the off-kilter positioning of a window shade, and the startlingly beautiful natural light. One gets the sense that these are real spaces that are lived in and are not tampered with, and of course this is the truth. Alonso wants his film to smack with the pang of reality so that you can feel the physical as well as emotional weight of it.

These types of formal pleasures in Liverpool are countless. Every composition is mesmerizing yet never overly planned out; there is instead a sense of fragmentation and improvisation in the shots. Several of the opening scenes conceal views of seemingly crucial objects, such as Farrel's inscription on the side of one of the boat's pillars. Similarly, Farrel stares out of the frame at emptiness which we do not see, directing our attention at a world outside of the cinema, at worlds which have yet to be explored. Alonso illuminates as many of those neglected locations as he does mysteries about Farrel and his family. The film's thought-provoking final shot operates as a vehicle through which to piece together the events that take place over the course of the film. Great melancholy washes over the screen in the image of a red "Liverpool" keychain.
Posted by Carson Lund at 12:46 PM