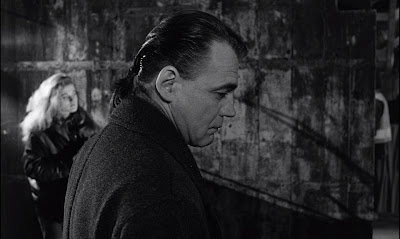 If you have ever wished you could fly, see Wim Wenders' Wings of Desire on the big screen. This may mean suspending your disbelief however and accepting that you have become an angel to Wenders, because in our secular world, Wings of Desire is an unabashedly spiritual film. That may take some getting used to for some people, but if you can warm up to the idea that the protagonists we sympathize with are indeed immortal spirits lovingly observing life in holy black trench coats, you are in for a gloriously elegant visual symphony. In it, Wenders does not just want you to watch the angels go about their business; he wants you to be an angel too. His camera hardly ceases its weightless movement throughout the film, hovering flawlessly over the mundane moments that make up the lives of Berlin citizens. Wenders has a way of making the mundane seem extraordinary though, and this is very much the purpose of the film, which ultimately surfaces an unusual irony: to grow accustomed to an empyreal perspective is to gather a paradoxical longing for the concrete, sensual pleasures of real life.

Such is the case with Damiel (Bruno Ganz), an angel who has grown bored of his task to spend eternity without human sensation. Instead, he mournfully watches both public and private moments unfold, periodically resting a hand on a woeful victim's shoulder without being seen or felt. He has the uncanny ability to tune in to the inner monologues of random pedestrians, catching snippets of their thoughts before moving on to new subjects, a tactic which sometimes results in a whispered aural collage. For instance, he'll track down a line of subway passengers or peruse around a spacious public library witnessing testaments that range from the humorously momentary to the abysmally philosophical. His partner in voyeurism, Cassiel (Otto Sander), goes about the same routine, although his pursuit is far more ascetic; he treats it like the deeply compassionate activity that it is rather than an unfortunate inevitability. In Wenders' Berlin, the immortals are very much in coexistence with the mortals, even when neither realizes it. Both seem equally relevant to the flow of everyday life.

Evidence towards this is present in the starry-eyed gazes that children cast in the direction of the angels once in a while, and also in the character of Peter Falk (playing himself) who admits to having made the "transition" long before the film begins. Falk is the good-natured, gruff film actor starring in the film-within-a-film, which appears to be some sort of concentration camp thriller. In the middle of Wings of Desire, while ordering coffee at a concession stand on the side of a drab street, he begins addressing Damiel directly, claiming he senses his presence. He starts explaining how the blissful combination of coffee and cigarettes is what swayed him towards switching to a mortal life. Despite the odd impression Falk makes on the confused passersby, Damiel is touched by the unfettered joy he gets from the simplest of human excitements. At this point, he has made up his mind: he wants to become mortal.

Falk is not the only factor in this persuasion however. The other - a beautiful trapeze artist Damiel is enamored with - ultimately thrusts the film in a wayward direction. Throughout the film, he sits in at circus rehearsals in which the woman, Marion (Solveig Dommartin), contorts in phenomenal directions high above the rest of the performers while the camera downplays its graceful movement to be replaced by her astonishing displays. Damiel even observes her privately in her trailer home swooning to records and relaxing in her bed, a privilege that thousands of peeping toms spend their lives yearning for. Wings of Desire's final chapter, in which Damiel makes the transition to mortality and guilelessly searches Berlin for Marion, essentially feels tacked on and insipid, as if Wenders could not resist an urge to endorse the film with conventional appeal. The contemplative tone of the long black-and-white preface is dropped in favor a color-drenched romantic fable that is burdened by the melodramatic nature of Damiel's cloying naiveté. Although we sense that Damiel's lust for sensation is finally met, the overlong ending makes Wings of Desire needlessly bifurcated.

Yet the meditative perfection of the majority of the film overshadows its near spoiler of a conclusion. Working with exemplary cinematographer Henri Alekan and assistant director Claire Denis in her early stages, the film is a recipe for beauty. The soaring but cautious crane and dolly shots that capture elaborately choreographed scenes adopt the first-person perspective of the angels and emphasize their affectionate scrutiny. To accompany the magnificent visuals, Jürgen Knieper's minimalist cello score pairs with the inner monologues of Berlin citizens to create intricately layered sound design. All of this works to exhibit a Berlin that is stung with an acute sense of melancholy that is similar to that of Angelopoulos' Greece, yet it is not without its celebration of life's pleasures as well.
Posted by Carson Lund at 2:21 PM