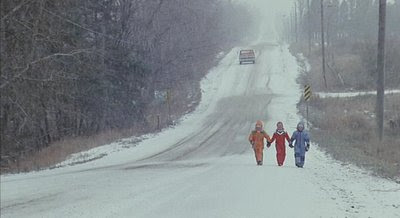 A conversation between a father and a son begins casually. The two figures wear robes are engulfed in black space. Before any verbal indications tell us so, we can infer what kind of father/son relationship is being studied: it is one where the father is a calculating authority and the son is a nervous, fidgety outcast. Slowly, these characteristics become pronounced and a gentle chat turns into a father's unflinching condemnation of his son's lack of masculinity. The son, actually a young adult with a full-grown beard, whimpers and fails to find a way to deflect his father's stern blows. When his emotional state is at its nadir, he lifts his shirt to reveal grotesque sores dotting his torso and back. The two lugubriously embrace in an air of tension and seemingly unrequited intentions.

And so begins David Cronenberg's deeply unpleasant but invigorating film The Brood. The scene is deliberately unexpected and disorienting, arriving on screen without any sort of warning or rundown as to what is going on. In fact, it is not until mid-scene, when Cronenberg cuts away to a crowd in a dark lecture hall watching this discussion that we have any sense of place. Cronenberg is teasing us in several ways; not only geographically and temporally, but also in terms of our perceptions of the characters. It turns out it is not a father/son dynamic that we are observing but instead an abstract role-playing game where the "father" is actually psychiatrist Dr. Hal Raglan (Oliver Reed) and the "son" his disturbed patient (Gary McKeehan). The scene effectively sets the tone for the rest of The Brood, positing the connection between psychiatrist and patient as an ambiguous one with unusual consequences, and establishing the film's tendency for moody guesswork.

Of course, then, Dr. Raglan is no ordinary psychiatrist. He actually specializes in an experimental technique called Psychoplasmics at the Somafree Institute, a method which aims to rid patients of painful emotions from damaging past memories by manifesting them physically in the form of epidermical deformities. (Such a bizarre premise is common ground for Cronenberg, who has made a long career out of presenting hideously tangible body horror as a way of channeling his lofty ideas about "the new flesh".) Dr. Raglan receives a patient named Nola Carveth (Samantha Eggar) who recently divorced her husband Frank Carveth (Art Hindle). Under only her father's care, the pair's young daughter Candice (Cindy Hinds) begins witnessing terrible murders of both her grandmother and babysitter. Frank investigates these freak killings because Candice represses all memory of them in an eerie silence reminiscent of little Danny in The Shining. The intricacy of the cases and the spots Frank finds on his daughter's arms leads him to begin speculating about the nature of Psychoplasmics, finding himself conversing with one of Raglan's past patients, Jan Hartog (Robert A. Silverman), a man who wears a thick white scarf to cover the worm-like entrails that protrude from his neck. Frank discovers that Raglan has actually discarded all of his current patients as a way to better centralize his attention on Nola, who receives daily checkups in a log cabin in the woods. At this point, he becomes thoroughly suspicious of Raglan's motives and increasingly protective of his own daughter.

Cronenberg had recently gone through a difficult divorce himself at the time, and the film's themes attest to that. There is a great deal of reticence and fear in The Brood, and I don't mean on the surface. Somewhat of a pessimistic, uncertain view is directed towards the concepts of birth and the sacred mother/daughter relationship. Ultimately, the bursts of violence enacted against central characters in the film are an indirect product of Nola, for we find out that the results of her psychotherapy are far more extreme than most. When Nola's father becomes another spontaneous victim of murder, Frank finally discovers the guilty party and, with the help of a scientist, discounts it as completely human. The murderer - or murderers it turns it out - are small unorthodox "children" absent of belly buttons, suggesting they were not born in the first place, yet they possess oddly human traits such as their bright blue snowsuits which closely resemble those of Candice. The film's doozie of a climax has Frank pretending to have rekindled feelings for Nola in an attempt to settle her down so as to give Dr. Raglan the ability to save Candice in the attic of the cabin where she is surrounded by scheming killers, the vehicles of Nola's rage.

Not all of the film is so pulse-poundingly tense however, and it is precisely this restraint that classifies Cronenberg as a filmmaker of great maturity rather than simply a purveyor of cheap exploitation, as his first two features may have suggested. The Brood's closing minutes certainly contain intensely graphic imagery, but it is elevated by its metaphysics, which are carefully implanted in the largely gore-less first 75 minutes. There is a great deal of probing dialogue on display, foreshadowing music courtesy of Howard Shore, and melancholic observations of the Canadian setting. Stylistically, the film's sober build-up would have you believe that nothing nearly as shocking and provocative could ensue in the final minutes. Cronenberg excels when snapping expectations and genres however, and in doing so manages to reveal the complex dynamics that exist within a family, specifically how the mistakes of parents can do irreparable damage to children.
Posted by Carson Lund at 10:27 AM

This sounds really interesting. Did you like it better than other Cronenberg's? Do you have it so I can borrow it?

This is a great write up. I love the Brood so much, its one of my favourite Cronenberg films along with Dead Ringers and Videodrome.

Thanks a lot K! I agree, it's definitely one of my favorites of his "horror" films, and I also think it has one of his most potent and personal messages.