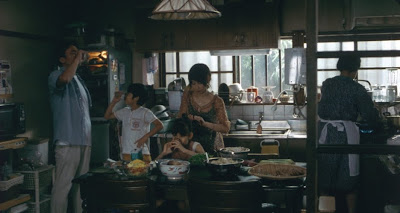 Coming out of the cinema after Hirozaku Kore-Eda's latest film Still Walking, the world seemed so unremarkable. The Boston streets felt like an urban dump in comparison to the lilting atmosphere created by Kore-Eda in what is, without a doubt, a spectacular masterpiece of observational family drama. Although deeply indebted stylistically and thematically to the films of Yasujiro Ozu, down to every last motif, with the leaves on the trees swaying with the exact same air of tranquility, Kore-Eda manages to settle into this mode expertly and still bring his own touch. Still Walking is the kind of film that makes you want to stay in the cinema forever and leave behind the real world, even though ironically, the film is so rooted in reality. Just as Doris Dörrie's Cherry Blossoms (2008) echoes Tokyo Story's first half, Still Walking's general plot reminds us of its second half; brought together by the death of a beloved son, a family packs into a cramped space in a seaside town to commemorate over a 24 hour span.

It is in the home of Kyohei (Yoshio Harada) and Toshiko (Kirin Kiki), the elderly parents, where this drama occurs. In their town lies the grave of their eldest and most preferred son Junpei, who died 15 years earlier in a tragic attempt to save his friend from drowning. Naturally, youngest son Ryota (Hiroshi Abe) does not have a soft spot for these family gatherings, because his father treats him with coldness, wishing beneath muted expressions that Ryota had been the one to die if one had to at all. He brings along his new wife Yukari (Yui Natsukawa) and young step-son Atsushi (Shohei Tanaka), the path of whom Kyohei attempts to bend to his own beliefs, brusquely informing him that a career as a doctor is the only honorable choice. Ryota's sister Chinami (Japanese pop star You) is also at the home from the very beginning with her husband Nobuo (Kazuya Takahashi) and her two children, and she is planning on moving in to her parents' home permanently, much to their dismay. In the opening frames of the film, we see Chinami shaving vegetables in tight close-up with her mother whilst the two beat around this subject, instead discussing Ryota's new wife, who Toshiko describes as being a bad choice because as a widow she did not have to choose to leave her husband.

These types of stinging offhand comments, which frequently take form not in words but in glances, densely populate the entire film, comprising a tense familial dynamic that only Ryota and his wife seem to be aware of. Kyohei is by no means deft in his disapproval of the circumstances, either sitting silently through an entire dinner reading a newspaper only to make one erratic footnote or hiding away in his office, mindlessly shuffling the papers that are the last physical reminders of the medical career he once had and the intensive labor that put a roof under his head. Toshiko is less overt with her rudeness, and also seemingly less self-aware; in a scene following the visit of the fat, unsuccessful friend that Junpei saved, Toshiko bows her head and tells Ryota a shameless account of why she invites Junpei's friend back every year. Knowing that it is a difficult task for him and that it makes him severely uncomfortable to see the family given his modest failures only fuels Toshiko's need for closure. Ryota sternly advises against the actions of his mother, hiding away the feelings of supremacy towards his mother that surely lurk beneath his relatively complacent facade. 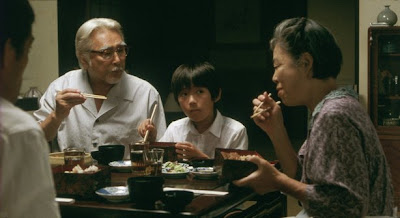 If the immediate family members are caught up in a flurry of these shared experiences, Yukari represents a passive observer and an audience surrogate. Though recently inducted into the family due to her marriage to Ryota, Yukari does not fully understand the seeming shallowness of her husband's mother (she treats Atsushi like a guest and not a grandchild) and the obvious disinterest of Kyohei. As the film progresses, the sparse dialogue she does have becomes words of wisdom, as she gradually picks up on and embraces the hurdles the family has to deal with, just as we do. Kore-Eda paces the film with extreme deliberation, as each sublimely placed cut serves only to enhance the power of the scene rather than to show off. Indeed, if he does not need to cut, he will not, which explains the several extended observational takes of the family during mealtimes, compositions that delicately pay homage to Ozu. In one perfectly machinated sequence, the family sits on tatami mats and eats sushi while the young children go into the yard offscreen giddily to smash a watermelon. The camera stays fixed outside the open porch door, respectfully remaining there until the majority of the family exits the room, leaving only Kyohei and Ryota. The two uncomfortably discuss Ryota's job as an art curator with the camera placed 180 degrees from the initial shot, until Kyohei gets hostile and the camera closes in on his face. This long, evocative scene explains a great deal about the characters while remaining decidedly non-confrontational from a stylistic trajectory. It is indicative of the kind of restrained calculation that characterizes Still Walking.

The modernization of Ozu's key themes - inheritance, generational conflict, acceptance of flaws - mixes with Kore-Eda's own gentle deployment of familial shame to create a film that speaks volumes about human existence while being, with its generous doses of wry, modern humor, universally relatable. While adopting Ozu's cinematographic chops, Kore-Eda also incorporates his own use of camera movement, accentuated by the gorgeous and unexpected final shot, a dolly upwards over the seaside town that recalls the final shot of Mizoguchi's Ugetsu and reveals the visual elements (trains, trees, ocean) that seem as inseparable to Kore-Eda as they do to Ozu. With an expressive guitar-based score, immaculate naturally lit photography, and artisanal attention to Japanese cuisine, Kore-Eda's awareness of his surroundings becomes heightened to consummate verisimilitude. And to further ingrain the influence of Ozu, Kore-Eda implants the film's title with subtle resonance. At another of the family's dinners, Toshiko plays a record of the sentimental pop song that reminds her of her marriage to Kyohei. A notable lyric describes a couple that will "walk together forever". Kyohei and Toshiko are still walking, even in the face of everything that threatens to pull them apart, a relationship as strong and complex as family itself.
Posted by Carson Lund at 10:28 AM