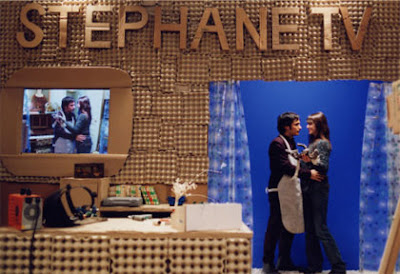 Michel Gondry's The Science of Sleep is one among only a handful of great 21st century examples of an established film artist letting loose their surrealist vision in a feature. David Lynch's INLAND EMPIRE and Matthew Barney's Drawing Restraint 9 are other standouts in this increasingly diminutive alcove whose cinematic lineage dates back to Luis Buñuel in the 1930's. These three films could hardly be more different aside from their shared agendas, which value stretches of sheer imagery and digressions over narrative causality. Sure, a myriad of current and future releases do disrupt film flow to focus on other avenues, be it fantasy or dream or something completely separate from the two, but more often than not they are doing so to jumble a narrative frame of mind, whereas the plots of surrealist films are decidedly diffuse or even non-existent at heart, and by extension shouldn't warrant any skepticism from the viewpoint of an audience expecting a narrative. This is precisely why critics who denigrate Gondry's The Science of Sleep for its befuddling "story" or its lack of discrepancy between waking and dream states - indeed, a characteristic often seen as an indicator of interesting surrealism - are so off-base. Gondry's film, and by default Lynch's and Barney's as well, is after an altogether incomparable audience response, a response that is intended to be more complex and slippery than what a basic story can deliver.

Meanwhile, despite the fact that I think surrealism is ultimately what Gondry is after with The Science of Sleep, a potent and surprisingly understandable story is cloaked beneath. In a part that demands more boyish whimsy than any of his career roles combined, Gael García Bernal plays Stéphane Miroux, a Mexican visual artist who comes to Paris after the death of his father to stay in his mother's apartment and work at what she describes a "creative job". What he ends up doing at first is simply screen printing at a puny firm among Guy (Alain Chabat), a sexually charged man-child, and the two underlings he calls "faggots" despite their opposite genders, which puts him in a miserable state. When the job of piano movers goes terribly wrong one day on the spiral staircase leading to Stéphane's mother's apartment however and Stéphane hurts his thumb, the neighbor Stéphanie (Charlotte Gainsbourg) feels responsible and invites him into her apartment, unaware of the fact that her patient is living next door. Stéphane is immediately attracted to Stéphanie's blond friend, but after more run-ins with the quaint brunette living across the hall, he develops a longing for her that is closer to soul searching than it is to a common romantic pursuit, given the fact that Stéphanie shares not only a similar name, but also his childlike love of the handmade arts.

That The Science of Sleep is such a personal film for Gondry does instill an innate sense of intimacy and sincerity. Watching interviews with Gondry, one can tell that the person behind the director's chair is the same person as the main character onscreen. It's nearly impossible not to read Stéphane as the older version of the character of the same name in Gondry's early short film La Lettre, a photography fanatic with similar romantic misfortunes who was a direct portrait of Gondry himself as a child. Funny though, because in The Science of Sleep, the only adult aspect of Stéphane is the fact that he has the capacity to grow facial hair. His attempts at winning Stéphanie's heart are laughably cute at best, pathetic at worst, and his cultivated views of opposite gender relationships - at least compared to Guy - are overshadowed by his unattractive tendency to cry or burrow into his winter hat when in an uncomfortable situation. Why would Gondry go out of his way to create a double that proves he himself has matured little since her early days? I actually think Gondry embraces this idea of innocence and infantilism, and in doing so he not only challenges the accepted notion of masculinity but also gives himself leeway to be unwaveringly imaginative. When he needs to prove himself an adult, he does so in the moments of dry humor, brilliant technique, and eloquent juxtaposition of image and music.

The idea of the film being a virtual CAT scan of Gondry's psyche is supported by the incessant dreamworld that bleeds into the film's structure, or lack thereof. The whole film, which is essentially a document of Stéphane's inability to reconcile his waking state and his REM state, is therefore automatically a record of Gondry's own dreams. Stéphane's dreams are scarily "real", in the sense that they feel like what would result if one were to devise a way to actually film someone's dreams. They either consist of botched efforts at romance with Stéphanie, cartoonish, self-actualizing bouts of romantic success, or they incorporate mini-narratives that seem stripped from comic books and are replete with cultural caricatures, such as in a scene towards the end when Stéphane fancies himself an opportunist on the run from the police after a femme fatale inevitably deceives him. Gondry gives them his own unique flair with the omnipresence of paper products; cellophane becomes water, cardboard makes televisions, cars, and cameras, and felt works for everything else under the sun. This craftiness mirrors that of a child, but its nifty and immensely comprehensive application makes it indicative of a stirring imagination. The most transcendent shot of the film has Stéphane literally swimming over a cardboard city below him where the buildings sway back and forth underwater.

Although the film doesn't hold true to its story with the same dedication that marks Eternal Sunshine of the Spotless Mind, its singular achievement is capturing the uneasiness of love, the ephemerality of satisfaction, and the warmth and wonder of dreams. I think this is because Gondry is not restricted to the confines of someone else's script. Some see this as a problem, for it allows Gondry to pursue his relentless visual ideas with little restraint, but this is where the magic happens, where it has the freedom to sustain onscreen. Few had an issue with the randomness of Buñuel's Un Chien Andalou, another film that riffs explicitly on dreams, so why denounce Gondry for going down the same path if he's going to do so with care and finesse? One might say its purely a matter of taste, but if one can't see the beauty in the severely underrated Science of Sleep, one fails to grasp the magic of dreams and relationships.
Posted by Carson Lund at 1:01 PM