Assembled from two of the nine sections in Akirari Ueda's popular Japanese folk tales, Tales of Moonlight and Rain, Kenji Mizoguchi's Ugetsu plunges into sentiments of consummate universality despite its distinctly Japanese inflection. Mizoguchi, like Ozu, was a director of undeniable talent with surprisingly little acknowledgment from western audiences, but the difference is that Mizoguchi reached international acclaim earlier than Ozu, who was deemed "too Japanese". Watching Ugetsu though, it seems the same label could be applied unfairly to Mizoguchi, despite there being a slightly more Orientalist appeal than what one can find in the rigorously formal familial observations of Ozu. I wouldn't say I was overwhelmed by the wealth of Japanese culture that was being directed my way, but I was in unfamiliar territory, amidst ancient civil unrest and Noh drama. Fortunately, Mizoguchi's directorial handle is so assured, his pacing and aesthetic choices so rich, that I was interested in traversing the risky terrain, and the results were greatly worth it.

The film deals with two materialistic brothers living in a village, Genjurô (Masayuki Mori) and Tobei (Eitarô Ozawa), who, in attempt to provide for their families, make the perilous trip to the local city. Genjurô and Tobei however, wrongly, equate fortune with happiness. Their wives, Miyagi (Kinuyo Tanaka) and Genichi (Ikio Sawamura), respectively, are at the mercy of the two men throughout the film, torn apart indirectly by their missteps and profoundly thankful for their successes. Tobei abandons Genichi once in the city in his giddy pursuit to become a samurai - one that ends with a fraudulent rise to the top that Tobei sees as honorable and Genichi, now serving as an ill-respected geisha, thinks of differently - and Genjurô leaves Miyagi and his young boy home while he pursues pottery sales. Living in a turbulent social landscape where warriors wreak havoc on the villages routinely, pillaging houses, raping, and killing without hesitation, all efforts undergone by the brothers are at the heavy risk of failure. It's a make or break situation, where one move could mean life or death. 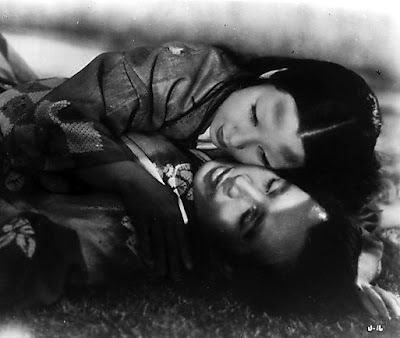 For a while, it seems Ugetsu will be bound to this historical realism. And indeed, the film would have succeeded simply in this mindset, which Mizoguchi conveys perfectly through his pedantic attention to historical detail and his tense camerawork, detached but instilled with a startling sense of immediacy. Nevertheless, to offset the brutal realism onscreen, and most importantly to coincide with the delusional ambitions of Genjurô and Tobei, Mizoguchi flows furtively into an unforeseen arena of the supernatural. When we first witness Lady Wakasa (Machiko Kyô), who soon is revealed as a ghost of the past, she is subtly unsettling in her ethereal white garbs but doesn't scream of phantasmagory. One can accept her as simply an eccentric local, as Genjurô does, but she lures him into her mansion with her distant seductiveness, a place he soon enough deems a paradise. Through a bizarre, shadowy communion set to eerie hums and bongos, the two become maritally bound, a perverse bond of life and death, of life and afterlife, that jibes with the film's looming sense of mortality, of grave consequences being omnipresent behind foolish choices. Sequences involving Lady Wakasa also include some of the most visually arresting moments in the film, such as the bracing transitional "scroll shot" (a famous Mizoguchi trademark) that glides from Lady Wakasa and Genjurô in a steam bath across the ground beside them and up to a separate scene with the two sprawled out on a tranquil lakefront.

As much as I'm in awe of Mizoguchi's mise-en-scene, I remain skeptical of his dramatic precision. Mori and Ozawa, playing the two brothers, have a tendency to overact, placing huge, unbelievable grins on their faces in times when their overt shallowness has to be revealed. Of course the two border on comic figures, Tobei specifically, but rarely is there a glimmer of a serious human being behind all of the naivety. Tanaka and Sawamura have a similar tendency, although Sawamura's leans toward reeling self-pity, such as in the scene when Tobei discovers her unsatisfactory new lifestyle. Given the fact that Ugetsu is a tale of male domination, perhaps even a feminist tale, greater subtlety on the part of Mizoguchi's leading ladies could have gone a long way, as in the film's of Ozu. Nonetheless, I wouldn't refrain from proclaiming Ugetsu as the work of a director with a supreme understanding of the camera and the ways in which it acts as an inseparable counterpart to the mechanics of storytelling.
Posted by Carson Lund at 7:42 PM