Wendy and Lucy (2008) A Film by Kelly Reichardt 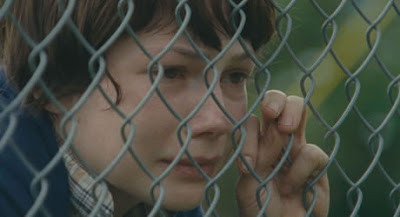 Often times there are stories that may crop up invariably for years, played out with minor differences in the films they inhabit. This works to recontextualize these snapshots to suit the times. Kelly Reichardt's third feature, Wendy and Lucy, is shimmering proof of this fact. Most specifically, cinema fans will be able to recognize the film's firm parallelism with Vittorio De Sica's Italian neorealist classic, Umberto D.. Wendy, standing in for De Sica's titular character, is an early twentysomething on a cross-country trip to Alaska in search of employment. Along with her is her affable dog Lucy, the only companion she seems truly connected to in her travels, similar to the way Umberto clung tightly to his delightful dog Flike. Wendy's car breaks down in Oregon, sending her through a succession of unfortunate occurrences that are propounded by her meager savings, namely the loss of Lucy who was tied up outside a supermarket when she was caught shoplifting. She spends the film searching for Lucy while trying to get her car fixed by the local mechanic.

The film is built around a largely introspective, first-person structure; Wendy's experiences are the camera's limelight, with the background almost always appearing out of focus unless resting on the Oregon residents she meets. She is an audience surrogate seeing her remote surroundings for the first time as we are. The only sincere help she receives comes from a down-and-out Walgreen's security guard who is first seen ushering her car out of the parking lot after Wendy illegally slept there for the night. Even then, what financial help he can offer is especially limited.

Wendy and Lucy continues Kelly Reichardt's restrained, un-preachy brand of unmistakably American filmmaking. 2006's Old Joy was a lyrical look at two old world liberals living under the Bush administration who had lost their ability to express emotions, and were also rather needy. Reichardt heads further into the troubling issue of poverty in recession-era America with Wendy, a desperate character whom Michelle Williams confidently plays with no-bullshit despondency. This time around the style is pointedly harsher and more matter-of-fact, with Reichardt eschewing music entirely (albeit in Old Joy she remained a minimalist in terms of the addition of music, setting only scenery-driven moments to Yo La Tengo's gorgeous guitar washes).

Reichardt sticks admirably to the most traditional methods of storytelling; there is not a single wasted moment as she places us durably at Williams' side throughout the film. Wendy's motivations are entirely comprehensible, whether she's frighteningly shuffling down the smalltown streets at night via the cloaked cuts of a succession of fluid tracking shots or walking out of the grocery store with unpurchased dog food, an act that was very much the instigator for her predicament. Reichardt's film is deliberately paced but always engaging, troubling but never heavy-handedly tragic, hopeless but always uplifted by Williams' staggering performance. Wendy and Lucy makes another sturdy case for Reichardt as one of America's most modest up-and-coming poets, an uncommon director who always manages to avoid didacticism in communicating a vividly pressing point. Very much like De Sica.
Posted by Carson Lund at 3:16 PM