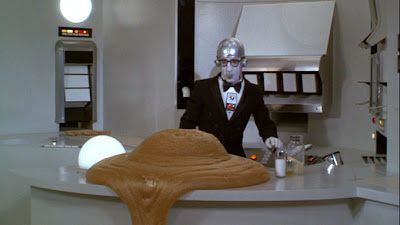 Sleeper may very well have been the first time Woody Allen was able to pull it all together: a story with coherence and flow (the terrain on which Bananas, Take the Money and Run, and Everything You Always Wanted to Know About Sex * But Were Afraid to Ask struggled), a pleasing balance of slapstick and verbal wit, and an intellectual undercurrent (which, to be sure, is very much an undercurrent, for it's so disguised underneath Allen's playful whimsy and absurdist logic). Woody was still a young, instinctive director at this point, but with three uproariously original films under his belt, he was beginning to erect the confidence and studio backing he needed to create a sprawling science fiction farce like Sleeper.

The film satirizes America of the 70's by projecting society's foolishness into that of a totalitarian police state of 2173. It's an intriguing concept, because when Woody's character discusses American history to awestruck future humans, they laugh at the seeming idiocy. In turn, the audience laughs, likely for the same reasons they do, so the film is able to induce the same kind of hypnotized state in its audience that it reveals with its characters, reflecting how easily people can be blinded by the delusions of their situation. Allen stars as Miles Monroe, a jazz clarinetist and health-foods store owner in Greenwich Village who is cryogenically frozen following an operation only to wake up 200 years later in the presence of some dissidents hoping to use him as a method of obtaining secrets from the government in light of his complete anonymity (in this society, punctilious records are kept on everyone). Being the neurotic pipsqueak he is, Miles flees just at the suggestion of possible capture, eventually finding his way out of desperation into the suit of one of the many household robots.

He is delivered to the house of Luna Schlosser (Diane Keaton), a complacent ignoramus with acclaim as a poet, who hasn't the slightest of suspicion regarding her new assistant. Once his identity is threatened, however, he reveals himself to Luna and takes her under his wing in his mission to avoid capture, in the process inadvertently transforming her into a pseudo-intellectual that spits out factoids about Karl Marx. Ultimately, she ends up serving the role that Keaton always does for Allen: the optimistic free-spirit who gives him upbeat fodder against which he can unleash his quick-witted, nervous chattering. In Sleeper, this ability to interact on some human level is especially valued by Allen's character given the sexual frigidity and displaced moral stance of the futuristic society (a device called an Orgazmatron is used to eschew the act of sex entirely).

The film has some of the most accomplished visuals of Allen's early work. With slick, sterile set design that is often meant to emulate that of Kubrick's 2001: A Space Odyssey, Sleeper exhibits a canned futuristic look brought to life by dynamic camerawork and Allen's uninhibited physical liveliness. Against the strictness of the society and its architecture, Allen slapstick gestures are especially potent. As in a Buster Keaton film, the camera trains itself on Allen's spontaneously silly behavior, such as when he sneaks into police-run territory to steal food for him and Luna in their forest hideaway (he is trying to acquire oversized bananas and strawberries, which are popularly regarded as unhealthy while cigarettes are considered nutritious). The film's roaring jazz soundtrack (on which Allen himself played clarinet) dominates during these outlandish romps, presenting yet another exuberant contrast to the cold features of the milieu. Miles and Luna pass themselves off in one last ditch effort as doctors familiar with cloning, sparking the arrival of the film's hilarious finale, which speaks to the hilarity of Allen's vision: they fudge a cloning of the dictator, who has been reduced to a lone nose.
Posted by Carson Lund at 1:20 PM

Great writeup. I agree that this is Woody's first truly good film. There are moments I like in the first three (especially Take the Money and Run, a fine debut), but this film is a pretty massive leap forward. The Woody/Keaton pattering relationship is at its peak, and the futuristic setting provides a different context for Woody's distinctive humor, much as the trappings of the Russian novel would in Love and Death. And I love all the slapstick sequences, Woody's tributes to silent comedy. He doesn't do that kind of stuff often, but when he does it proves that his comedic talents are more than just verbal -- see also the hyperactive helium-fueled chase sequence in Broadway Danny Rose.

Thanks, Ed. Regarding the slapstick sequences, I think that although they are not Woody's primary tactics, he can do it better than most, the greats included. His facial expressions and frenetic movements are completely his own. He takes the tradition of silent comedy and gives it a very unique spin so that it's more than just tripping on objects in fast motion.

Also, to be fair, Take the Money and Run is only his first true "directorial" film, in that he was actually shooting scenes. Technically, his first film was What's Up, Tiger Lily?, an absurd reimagining of a Japanese crime film which he completely voiced over.