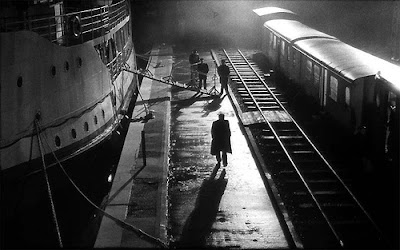 When writing about Bela Tarr's cinema, starting with the opening shots of his films is nearly unavoidable. He places so much emphasis on his extraordinarily long, spellbinding first impressions. Seven years after Werckmeister Harmonies, the greatest film of the 21st century thus far in my opinion, he has somehow managed to match the brilliance of its opening shot with The Man From London's, a feat which seemed unimaginable. Beginning on a rope dangling in water as it anchors a boat to shore and concluding with a train leaving its station seen through the wooden supports of a watchtower, the mind-bendingly complex shot tells an entire slow burner of a story that makes up a great chunk of the film's plot: Maloin (Miroslav Krobot), the gloomy watchtower attendant, paces back and forth in his roost and witnesses a classic bit of noirish tomfoolery involving a cloaked man with an ominous suitcase evading the boat guards. The shot is delivered in one swooping motion, first upward and eventually repetitively horizontal, and is far more abstract than the cow trudge of Satantango or the bar dance of Werckmeister Harmonies. A few times, it seems possible that Tarr has actually cut, but what really happens is the frame is variably interrupted by pitch black surfaces, the floor of the watchtower or the thick window frames. We also never get a solid view of the interior of the room from which Maloin is voyeuristically peering, or of Maloin himself in fact; the camera instead crawls in and out of focus directly behind his gaping back, interchanging this with his panoramic view of the pier. After approximately twelve demanding minutes, Tarr has infuriated fans of "getting to the point" and left others, like myself, in mesmerized awe.

The impact of The Man from London can therefore be likened to the striking of a chord on the piano which is subsequently left to sustain. This is not to suggest that it declines considerably, because the final ring of the piano strings can be just as beautiful as that initial contact. However, as much as the film establishes what may seem like a plot-heavy noir, Tarr loses a whole bunch of interest in his initial premise (which ultimately finds Maloin with the suitcase of money), instead meditating on the aftermath. He lets the brooding mood of the film's initial minutes simmer over tangentially into the rest of the film. Mihaly Vig's deep, vibrating score continues to underpin, but does so at briefer interjections. A police investigator (István Lénárt) arrives in the small town Maloin inhabits, determined to solve the murder that followed, but goes about his business in a routine manner, only existing in the film through Maloin's immediate awareness and being nearly immaterial due to the fact that the bulk of his discussions are spoken in English, which the French Maloin does not comprehend. So, yes, to an extent, the film is Tarr's most plot-driven piece (perhaps naturally, given its source material is a 1933 Georges Simenon novel), with classic elements such as murder and suitcases of money, but paradoxically continues to treat atmosphere with the same emphasis. 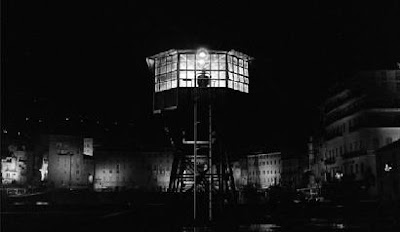 Tarr has stated that he intends on returning to simplicity for his declared "final film", The Turin House, because he felt he maxed out his capacity for technical bravura and narrative complexity with The Man from London. Of course, this comment is coming from the world's greatest arthouse practitioner, a filmmaker who is blind to current cinematic trends, so there is a bit of a knee-jerk response that accompanies it: "Huh? Complex?". Tarr's work is the holy grail of elusive cinematic excellence in the face of extremely modest material. I wouldn't say The Man from London is nearly pandering enough for Tarr to dive back to roots (even though it does have a surprising appearance from Tilda Swinton, an accomplished Hollywood name), but by the same token, he has pushed himself to the more conventional boundaries of his decidedly unconventional vision. Vig's music comes the closest it ever has to serving the classical function of a film score, showing up more frequently to bring mystery to the dullest of moments (Maloin purchasing his daughter Henriette (Erika Bók, the unforgettable little girl from Satantango) a fine scarf in attempt to detour his mind from the guilt of his silent possession of money). The use of Simenon's novel is also a choice that has raised eyebrows from Tarranites, considering it is quite orthodox indeed.

Nonetheless, Tarr's stylistic virtues remain intact. His work with cinematographer Fred Kelemen (a student of Tarr's) is characteristically marvelous. The film's look is a sterling example of chiaroscuro lighting, giving defined crispness to the world-weary wrinkles in his familiar character's faces (I say familiar because we have seen nearly every character in a Tarr film before and they essentially reprise their roles). At times, it was difficult to recall when a particular shot began, largely due to the fact that his stately camera movements travel anywhere and everywhere, showcasing an amazing ability to shift focal planes. As usual, Tarr does the majority of his sound work in post-production, which has admittedly become most noticeable here. The dubbing, while it does sometimes seem to be a choice meant to give a hypersensual quality to voices that succeeds frequently, can be aggravatingly disjointed. Still, Tarr's crystalline handling of the nuances of a bar room's ambiance proves to be one thing that never ceases to be singular; pool ball's rattle around with unimaginable amplification, accordions sound continuously, and the slurping of beer against the lips has wonderful clarity. That being said, the fact that Tarr returns so casually to an almost exact replica of the kind of pub that we saw in Damnation (1988) smacks of regression rather than artistic evolution.

I do believe that The Man From London was given an unfair glance by many critics at Cannes two years ago. The resounding verdict was that it was "good but not great Tarr". The film doesn't resonate with as much cosmic multivalence as Werckmeister Harmonies, but there is also an entirely different goal at hand. Tarr's more occupied by Maloin's passivity, a trait that eats away at him, and his desperate need to make something of his humdrum life, made known by the metronome-like rhythms that sometimes reverberate in his head. If the film were treated with the same kind of epic scope of its predecessor, it would have been off base. The Man From London is dealt with exactly as it should be, a reserved examination of the human condition with quiet intensity. It is different than any other Tarr film, and given his apparently impending retirement, it should be savored.
Posted by Carson Lund at 1:31 PM