Silent Light starts and ends with a sunrise and sunset, a monumentally simple concept that surprisingly has never once, to my knowledge, been exercised in a film. The two shots are undeniably sublime, protracted glances at the beauty of our world, and create something akin to the curtains opening and closing in the theater, a mere blink of the world's eye that exposes an age-old tale underneath it in the Mennonite community the film is set in. Director Carlos Reygades is unafraid to allow something so ordinary to grace the screen for an extended period of time, and in this refusal, demands the hushed attention such a cosmic act of nature deserves. His camera begins pirouetting through the starry night sky, eventually spiraling towards the ground and finishing with a languorous dolly in between two silhouetted trees, revealing the expansive sky as a slowly evolving amalgam of vibrant red and yellow paint. Accompanying it is the amplified buzzing of cicada bugs and the soft purr of the dawn wind. The shot's coda is essentially a reversal of the first one, and it is one of the most satisfying, visually orgasmic finales a film can offer, an aurora-borealis-like sight that accounts for one of the finest moments in contemporary cinema. These two shots contain enough wonder for an entire film, and I would have called it a masterpiece had they been the only components of Silent Light. The bleak moral play that exists within the remainder is, in this line of sight, somewhat of an addendum, enough to make a strong piece of pure cinema to be sure, even improved by the confounding impression that the opening leaves over, but it can be tedious.

The film chronicles an austerely, but not explicitly, religious man named Johan who is juggling two women in his life, a rather surprising fact considering the rigidity of the community. The Mennonites are settled in the Northern tip of Mexico, speak a German dialect called Plautdietsch, and adhere to liturgical activities in their withdrawn village, a place where the sounds of spoons upon bowls seem to reverberate for miles. Following the opening sequence, we see a silent family in prayer before a table of food and only hear the loud ticking of a clock in the background, which is trailed by a shot of a shiny disc on the clock that reflects the whole family. Immediately, Reygades also presents the village as a place where the slog of time is far more relevant to life, a characteristic that it shared with its festival companion, Times and Winds; each second that clicks by, it seems that emotions are magnified. Representing Johan's past lover but established partner is his wife Esther, a somber woman who cares for the pair's children and is well aware of Johan's admitted adultery with Marianne, another woman in the community with some physical similarities who genuinely feels bad for Esther. Johan feels some grief over his crisis, evidenced by the number of times Reygades patiently observes his weeping, but also believes that God has chosen a path for him to be with Marianne. He clearly still harbors much love for Esther, but his physical and emotional desire for Marianne is overwhelming, a notion he makes perfectly clear to his preacher father. Johan's struggle is universal - the difficulty to resolve one's polarized romantic feelings - but his method of dealing with it is certainly unusual. Esther makes her despair known in the climactic scene (staged traditionally in accordance with climate), first accusing Marianne of being a "damn whore" and then lamenting the past when her relationship with Johan was functional. The love triangle is an extremely unconventional one, with Marianne in complete understanding of Esther's turmoil, Johan unfazed by his dishonorable acts, and Esther repressive with her disapproval. 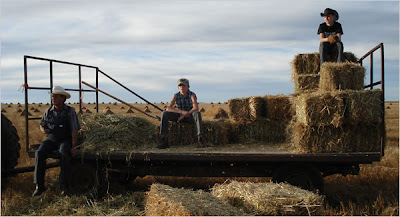 Carlos Reygades is a director whose first two features, Japón and Battle in Heaven, were both stylistic originals but nonetheless did little to foreshadow the ascetic, contemplative tone of Silent Light. The film's visual palette is representative of both Tarkovsky and, more presently, Lisandro Alonso. Each time Reygades establishes a scene with a wide shot, that wide shot lasts much longer than one might expect, and eventually, after tracking into the scene creepily, it becomes the shot for the entire scene. This is most mysteriously displayed when Johan visits a friend at his garage and the interior is pitch black until the camera enters completely. Also, the camera will perform the equivalent of Ozu's "pillow shots", only for Reygades, they frequently come during the middle of a scene. For example, when Johan and Esther are driving through inundant rain, the camera cuts away from their conversation inside the car - which always includes only one of them in the frame at once to suggest their spiritual disconnection - to follow on the dirt road at a distance before returning. There are also observational pauses in the story when we just view the family bathing outdoors or Esther driving a tractor through the wheat fields. For the first thirty minutes or so, this rhythm is tiring, but once Johan's crisis is learned, the film accumulates herculean force. In many ways, Silent Light is a riff on Dreyer's Ordet, except without such a blatant fixation on the religious strain. This is most evident in an exactly congruent denouement that acts as somewhat of a resolution to Johan's crisis and a justification of Marianne's earlier, and likely true, statement: "Peace is stronger than love." Whether this is an "homage" to Dreyer or a ripoff is in question, because there is a sense that Reygades uses the scene in the same affirming manner. Despite this though, the scene's power within the film is unquestionable, as are the other 145 minutes of elemental, authentic filmmaking. Silent Light is an assured film that uses the beautiful perplexity of nature to compliment and bookend the fragile frameworks of love and faith.