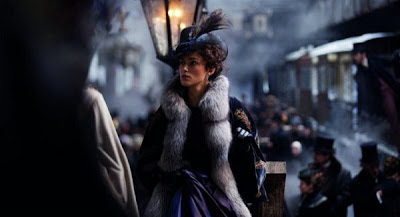 The world of Anna Karenina as seen by Joe Wright apparently interpreting Leo Tolstoy is expressed as a large, seemingly expanding and contracting theatrical warehouse, inside of which 19th century corridors extend into lavish ballrooms, which in turn lead outside to acres of snow. Spaces are liable to shift – the entire opening sequence is an elaborately orchestrated tour of dainty St. Petersburg, around which walls and set pieces slide in and out of the frame to accomodate ornately costumed members of the Russian aristocracy. The occasional conveniently placed ladder escorts a figure above the stage and into what appears to be both an unglamorous catwalk and the outer reaches of the town's wintry train station. Geography, such as it is, is nearly cubist in its illogic.

What this imaginative leap from both physical rationality and the source material – Tolstoy, of course, did not integrate such an adventurous conceit into his original novel – initially does is brace one for a detached, formalist reading of a historical period/text, a la Lars Von Trier's Dogville, Stanley Kubrick's Barry Lyndon, Catherine Breillat's Sleeping Beauty or Bluebeard, and Aleksandr Sokurov's Russian Ark (from which Wright apes a fluidly shot ballroom dance number). But Anna Karenina, ultimately, does not quite join that esteemed company due to its inability to fully embrace the rigid theatricality of its chosen mode of adaptation. In some cases, Wright keeps his audience at a deliberate remove from the action (there are even several images of doors being closed on the viewer), but in others, the film practically overexerts itself trying to wrap itself up in the emotionality of the material, resulting in heavily-scored close-ups of a tear-stained Keira Knightley. It's stuck somewhere between histrionic and passionate, without a clear idea of what to do at either end of the spectrum.

If Wright's previous literary adaptations showcased the director taming back (and in this case, "taming back" is akin to Bela Tarr allegedly going "simpler" (The Turin Horse) after his most "complicated" film (The Man From London)) his obvious excesses in an attempt to service a satisfying drama (see: Pride and Prejudice and Atonement), Anna Karenina sees him succumbing giddily to his impulses. Wright – who's never met a swooping crane shot, dramatic dolly move, emphatic rack focus, or glowing backlight he didn't like – enunciates every intended emotional beat with a stylistic flourish, but the result is a suffocation rather than a heightening of feeling. The effect of the technique is what's emphasized over the effect of the dramatic moment. St. Petersburg, as presented in the film, is defined by the pretensions of high-society, by the laws and restrictions set against any sort of debauchery, so the question, then, pertains to where exactly this gloss of aesthetic indulgence is emerging from. Certainly not from anything readily identifiable in the film. One might make the case that it's Anna's (Knightley) submerged desires manifesting themselves in the form of the film, but that seems a mighty stretch, especially when considering how the film treats her passions as an unawakened, and slowly awakening, entity (maybe a gradual, automated build of style would have done the trick), and also how the cinematographic approach is applied wholesale to the entire narrative, even in moments when Anna is nowhere to be found. 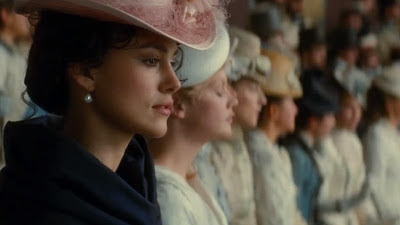 In the context of this stylish overstatement, the faux-theatrical setting starts to feel less like the distancing device it announces itself as and more like an ostentatious add-on to an already bustling high concept. When Anna, the wife of an aging clergyman, falls into an affair with Count Vronsky (Aaron Taylor-Johnson), the film settles into rather conventional forbidden love territory, with Wright's flourishes emphasized more than the story they're supposed to be embellishing. Furthermore, unlike James McAvoy in Atonement, Taylor-Johnson is cardboard thin as the male point of sympathy, never making a reasonable case for Anna's infatuation with him. Far more interesting is the film's representation of a community collectively turning against one of its members out of fear of damaging their surface of repressive good behavior. Anna Karenina's best scene is set at a horse race where Vronsky crashes off the side of the track, his horse contorting its body on the ground violently. Wright layers on the artificiality in this sequence, using a wooden backdrop of painted spectators to complement the small crowd on the other side, and rendering the race in conspicuously fake traveling shots of the racers in front of dark, blurred backgrounds. The setting feels so unreal, so claustrophobic and rigid, that when Anna cries out in shock at the sight of Vronsky and his horse toppling over, the dissonance between her genuine release and the rest of the audience's polite restraint is powerful. It's also perhaps the only instance when the film fully realizes its submerged critique of the stern gender roles and uncritical pack mentality inherent in its milieu.

The rest of Anna Karenina only makes small breakthroughs, presenting bits and pieces of good ideas that are never fleshed out. (For one: Anna's yearning for escape – and simultaneous inability to easily do so – is represented by the train station, a place of darkness of violence throughout (one man is killed in the tracks early in the film, and later, Anna meets her demise there as well), and Wright uses evocative close-ups of the gyrating train wheels during moments of internal emotional conflict.) Otherwise, the film is too busy making arty detours into quasi-musical sequences reminiscent of Stomp and awkwardly sensual love scenes to devote time and energy to its thornier subtexts.