Bernie (2012) A Film by Richard Linklater 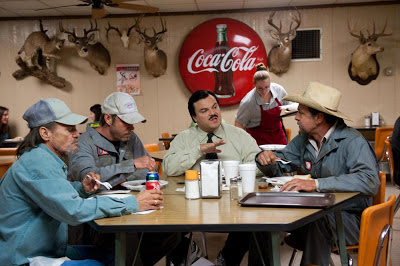 "You cannot have grief tragically becoming comedy," warns Bernie Tiede (Jack Black), a plump, mustachioed mortician while giving a sermon to funeral service trainees on the "cosmetizing" of a corpse. The film which contains him, however – Richard Linklater's 17th feature as a director and his first fiction set in his home state of Texas since 2001's Waking Life – proceeds to disprove its central character's early dictum. Bernie gauges the reactions of a small Carthage, Texas community to an increasingly bizarre series of events surrounding the saint-turned-murderer at the heart of the film, and it does so with the light, relaxed tone of an airline tourist video, effortlessly translating shocking true-life circumstances into the stuff of detached belly laughs.

After delivering with painstaking aplomb ("do not over-cosmetize") and one-liner levity ("too much color does not make one look more alive") the embalming lecture that opens the film, Bernie drives through the sunny streets of Carthage bellowing an evangelical pop tune in the distinguished tenor familiar to the churchgoing residents of the town. Linklater then goes on to outline all the contours of Bernie's life and his role in the community. An unabashed gentlemen completely devoid of prejudice or self-interest, Bernie tends to his profession not out of personal necessity but out of both a respect for the concerns of grieving families and a seeming responsibility under the Lord. But his self-sacrificing commitment to his work and to the needs of the townsfolk basically diagnoses a lack of a personal life. So ascetic is Bernie's lifestyle that members of the town have been tempted to playfully assign psychological justifications for his self-effacing kindness; one rumor circulating in this very conservative community deals with a possible link between his superficially effeminate interests (he is heavily involved in the theater community and is the most musically gifted member of Carthage) and his potential homosexuality.

Another eccentric detail of Bernie's personality is his conspicuous interest in the older women of Carthage, a fascination that winds up dictating the course of the plot. Bernie takes a liking to Marjorie Nugent (Shirley MacLaine), a notoriously witchy widow who regularly attends community events alone and with a frown on her face. After their initial meeting, the narrative speeds through their relationship, making a point to merely trace its unusual developments so as to approximate the confusion of a community witnessing from the outside. It's not long before Bernie is locked in an emotionally abusive arrangement with the socially-deprived Marjorie, who relies on him to carry out her daily chores like a drill sergeant ordering around his novice soldier. Bernie, of course, gracefully complies – until one day he doesn't. Impulsively sensing an opportunity to free himself of his obligations, he grabs a rifle in her garage and shoots her in the back as she approaches her car. Four times. It's a shockingly incongruous character action, but Black avoids overplaying the anomaly. The result is a moment of convincingly multifaceted, frighteningly double-edged humanity. 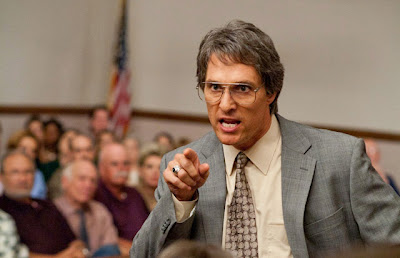 Linklater's stroke of genius is in rendering this tale – which opens with a tongue-in-cheek title card indicating that it is a true story – as a fluid conversation between two modes of expression: a mock(doc?)umentary featuring interviews with the townspeople, and a staged narrative with Bernie as the protagonist. Eventually these two approaches overlap, with individuals initially appearing in interview being seen as characters in the story proper. The result is a sense of ambiguity regarding where the line between "authentic" and "staged" begins and ends, a relishing in a grey area not commonly approached in such sensitive true-life subjects. Are the people speaking directly to the camera commenting on their relationship to the real Bernie Tiede, or are they aware of their status in manipulating a recreation of real-life events? Whatever the case, Linklater's direction is so even-handed that Bernie coheres as one organic expression, and the ambiguities in representation only fuel the film's astute commentary on the incongruities in human nature.

That commentary has to do with the innate tendency towards recognizing only "good" and "evil," a trait that the lighthearted, benevolent souls of Carthage can definitely be said to flaunt. The film – which for its first 45 minutes or so is a breezy yet darkly humorous affair – enters some unexpectedly heady philosophical territory following the central murder of Marjorie Nugent, all while preserving Linklater's characteristically carefree touch and his understated, almost provocatively dry visuals. The final act concerns the low-key battle between the no-excuses ethical rigidity of law enforcement (embodied by a brilliantly po-faced Matthew McConaughey as Sheriff Danny Buck) and the collective denial of the community, who would rather resemble a meek mother give their son a slap on the wrist for his wrongdoings and call it a day than be forced to realistically engage with Bernie's major offense. All of this culminates in the afternoon court trial that concludes the film, a sequence rich with unsettling implications that is nonetheless rendered in warm daylight and a destabilizing mood of failure, as if Danny Buck is the oppressor and Bernie the oppressed. It's a challenging and deceptively critical look at the dark heart of a community essentially apologizing for a crime against mortality, the additional, lingering shade of complexity of which is the realization that Bernie's abnormal act was nothing less than a human act.