Lincoln (2012) A Film by Steven Spielberg 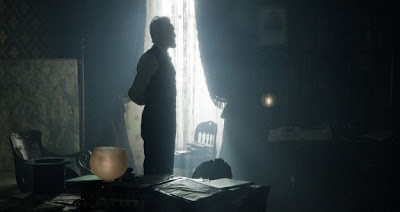 With Lincoln, Steven Spielberg has managed to supply meaty human drama, unexpected revelations, and even suspense to a historical political procedural of which everyone knows the conclusion. It is, of course, the story of President Abraham Lincoln's heroic passing of the 13th Amendment, a piece of legislation that brought legal equality to all living on American soil during a time of rampant slavery and a divided nation. The historical moment is ensconced in the American collective consciousness, recognized as a vital step in the path towards national freedom, yet the concrete particulars of it are seemingly foggy to all but the most astute history buffs. Spielberg's film presents all the key figures, basks in a firm sense of period authenticity, and never strays from documented historical truths (even if its does neglect certain incidental details such as Lincoln's possible homosexuality). Within this framework, however, Spielberg and playwright-turned-screenwriter Tony Kushner take a relative degree of liberty with the narrative to forward their own philosophy of political legislation. Neither portentous nor genteel, the result is one of the most clear-eyed and mature films Spielberg has ever directed.

Our first glimpse of Lincoln (Daniel Day-Lewis) is on a stool beneath a tent at a rainy Union camp, answering the questions of two black soldiers urging a swift end to the war. His gaze is fixed and his body is in a dignified pose, three-dimensionally lit as if a statue. Our second glimpse of Lincoln shows him sprawled out on a chair in his White House bedroom, his feet lifted on a nightstand as he surfaces here and there from a book he's reading to engage with his wife Mary Todd (Sally Field). The two representations are at opposite ends of the myth-making spectrum: the first incorporates the iconic stature he has developed as a historical figure, and the second undercuts that larger-than-life aura, revealing a flesh-and-blood human in complete relaxation. In posing these two images relatively side by side (only a brief, lyrical vision of Lincoln manning a ship headed towards a murky horizon separates them), Spielberg erects the central dichotomy that he will continue to exploit throughout the film. Bold, painterly shots of Lincoln in his office silhouetted in the window in calm repose are continually counterbalanced by more candid portrayals, subtly calling attention to the way history shapes and even distorts an individual into something inhuman, into an idea or an image. Yet at the same time, the film cleverly suggests that Lincoln's great act of "political genius," to reference the text on which the film was based ("Team of Rivals: The Political Genius of Abraham Lincoln," by Doris Kearns Goodwin), was his ability to foretell this very phenomenon and ultimately learn to exploit his own mythical quality to his desired end.

That end, of course, was signing the 13th Amendment to abolish slavery and end the Civil War. Lincoln presents the struggle to reach this goal as a dense succession of small battles with stubborn Democrats. At best, the results are a hard-fought one or two additional votes. At worst, these battles are an entirely fruitless pursuit. The film traces the segmentation of this larger purpose from the persuasive chats around Lincoln's crowded office table between key politicians to the remote vote-scavenging of a motley crew of anti-slavery political correspondents offering government jobs in exchange for affirmative votes (W.N. Bilbo, Robert Latham, and Richard Schell, respectively portrayed by James Spader, John Hawkes, and Tim Blake Nelson, all of whom are excellent in their limited roles). Though the violence of the war is kept largely offscreen (with the exception of a brutal opening sequence of muddy combat that establishes a specter of death haunting the slow productivity of the rest of the film), the friction created by the disapproving Democratic Party –especially within the House of Representatives and especially when contrasted with a fierce radical like Thaddeus Stevens (Tommy Lee Jones) – entails that a different kind of war rages with words, glares, and ideologies. On top of this, the Lincoln family is pitted against one another as Abraham's oldest surviving son Robert (Joseph Gordon-Levitt) ignorantly pleads to join the army in support of the Union, even as his parents' bond is tested by an argument concerning their deceased veteran son.

As Lincoln, Day Lewis is so quiet and unassuming that he would nearly disappear into the woodwork were it not for cinematographer Janusz Kaminski's constant heavenly backlight. Often resembling an under-rested college student on an all night study binge with his shawl slung over his shoulder, Lincoln's air of fatigue and ambivalence (head bent over, voice just barely audible) betrays an immense perseverance, an ability to withstand long droughts of cooperation and still have a bit of beguilingly placid wisdom at the ready. Through much of the film, Spielberg renders Lincoln a mere figure in a crowded frame of politicians, as equal in focus and compositional real estate as he considers himself to be on the argumentative / conversational playing field. Seemingly every point Lincoln makes is wielded through a form of storytelling, a way of appealing to his listeners not with hard politics but with digressive anecdotes that gradually and delicately reveal their respective ideological slant. In doing so, he turns monumental political discourse into a casual gathering, as if he's invited friends over to his home for bourbon, biscuits, and small talk. 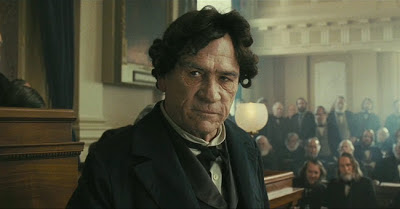 This lulling – albeit methodically gripping – effect that Lincoln has on those around him inevitably dictates the tone of the film. Most scenes take considerable time developing their central purpose in the narrative, and several times separate scenes serve identical purposes, yet they are approached from slightly different angles. Such is the trial-and-error nature of political discourse, the film suggests, a perpetual process of framing and re-framing arguments to combat different biases until, finally, some breakthrough is made. One of the film's key moments is when Thaddeus Stevens – hitherto an angry, impatient abolitionist – tempers the usual antagonism of his debating approach and offers to a packed House of Representatives that the 13th Amendment be seen as promoting legal equality rather than cementing moral responsibility. It's a small but crucial shift in phrasing that allows Stevens to better appeal to the skeptical Democrats. Lincoln, on the other hand, bases his entire approach to argument on this careful consideration of the politics of language, such that every monologue he delivers crackles with euphemism, allegory, and allusion. Only in the rare instances when these tactics fail must he resort to the sheer force of his mythical status to make a point, most memorably expressed in a climactic speech where Spielberg's camera finally indulges a tight, bottom-up angle of the towering President.

Such a moment, however, is not the norm in Lincoln. Searching for unpredictable ways of quelling dissent, temporarily sacrificing one's beliefs for the sake of collaboration – these skills form the core of the film's philosophy. But it's not just a political philosophy. The techniques the characters use to achieve success apply just as well to family life, social life, professional life – anything that requires humans to interact to get something done. In a time of great bipartisan strife and some of the most urgent political issues in decades, Lincoln demonstrates, once again and for good measure, one of the most valuable tool we have as functional, productive humans: that of working together, of compromise. This may seem like the same kind of fortune-cookie hokum modern politicians spout to garner votes and sieze widespread attention, but Spielberg's honest, carefully developed film earns the lesson scrawled modestly across its runtime. It's a lesson that is expressed in every facet of the film: its patient construction, its slow-burning triumph narrative, its unobtrusive visuals (which correlate deep focus and compositional balance with humanist equality), and its dense dialogue. And it's a lesson that marks even the unnecessarily depicted inevitability at the end of the film; even Lincoln's death, in its own perversely deterministic way, is a form of compromise.

"With Lincoln, Steven Spielberg has managed to supply meaty human drama, unexpected revelations, and even suspense to a historical political procedural of which everyone knows the conclusion."

I felt the same way Carson. You write a very well-defined essay here and touch on many of the things I love about this film. It is one of Spielberg's best films and at times even felt not so Spielbergian. Your description of Day Lewis's performance was right-on. It almost threatens to remain in the background, but maybe the film is all the better for it. This is one of the best films of 2012.

I obviously agree, and it has totally jumped up on my year-end list. It's funny how so many have written things like "it's one of Spielberg's best because it's so unlike his usual work." I actually feel it is entirely in keeping with his signature themes and ideas (the source of awe (equality/historical change) is just abstract and offscreen). The reason why it works so well, though, is that he has avoided his tendency towards overstatement. I kept waiting for Spielbergian schmaltz to compromise the film, but it never came.

Yeah that's what I meant. The more subtle approach. He's certainly made many films with historical perspective. It's his lack of overstatement like you said that makes it FEEL different.

Good review Carson. Not a film that will keep you alive and awake non-stop, but still a film that is sure to entertain as much as it informs. However, we all know how this story ends.