There's a throwaway gag about halfway through Black Swan in which a random creep in a trench coat hysterically "flirts" with a mopey, insecure Natalie Portman on a deserted subway car (smacking together and licking his lips, rubbing his junk). Director Darren Aronofsky covers the action in simple shot-reverse-shot setup, letting the absurdity play without interruption. It's a rare and welcome moment in the film for the way it digresses from Aronofsky's straitjacket design, his unrelenting control over the thematic direction of the film. Amidst all the airless grand guignol and ramshackle purpose, there's this glimpse of humble spectacle. It doesn't forward Portman's character progression, it doesn't have anything to do with ballet, and it doesn't even require any cinematographic hijinks to convey.

Of course I'm being a little facetious, but this is about as close as I got to pure pleasure from watching Aronofsky's latest film, which is otherwise a punishing yarn with little originality and a quantum leap backwards for him artistically. There was not a thought in my mind that after the positive evolutions of The Fountain (still his most thoughtful, sublime film) and The Wrestler (perhaps his most "mature") Aronofsky would regress to the manipulative excesses of Requiem for a Dream, calling back his old shock horror and whirlwind climax routine to alternately tedious and rousing effect. To be sure, Black Swan is definitely better than that film, with not quite as heavy a deterministic undertow, but within Aronofsky's often limited scope, that's not saying much. For all its surface discrepancies, Black Swan tells about the same story and makes the same statement as The Wrestler: Nina Sayers (Portman), a virtuosic but emotionally weak and vulnerable ballerina, is cast as the coveted Swan Queen in Tchaikovsky's Swan Lake, and as she is forced to mine the complicated depths of the role, we learn that in order to succeed in one's art, one must be utterly consumed by it. The artist must flirt with death, and in this mechanically ambiguous case, maybe even meet it.

If Aronofsky is recycling the structure right down to specifics, he's not doing the same with form. Where The Wrestler lounged in social realism, Black Swan is decidedly expressionistic and over-the-top, externalizing everything from Nina's subjective vantage point into the mise-en-scène - her fears, obsessions, and paranoiac projections, shoveled into the frame like the first snow of the season. When Nina returns from a night of peer-pressured partying and stumbles into her apartment, Aronofsky establishes the scene with a nakedly symbolic shot of a kaleidoscopic mirror that fragments Nina into various bits and pieces, clearly representing the fracturing of her usual self. The meaning is blunt, and one gets the sense that Nina and her equally uptight mother would not own such an ostentatious mirror; it's there for Aronofsky's sake alone. This manifestation of interior states grows tiring, especially when it is repetitively reduced to jolting shock cuts of bloody doppelgängers in the third act, who morph their way into Nina's overbearing mother (Barbara Hershey), her rival Lily (Mila Kunis), and a crazy has-been ballerina (Winona Ryder) who once had a flame with the ballet director Thomas (Vincent Cassel). The "gotcha!" nature of all this reality/fantasy flip-flopping is cheap and fraudulent, indebted as it is to countless predecessors like Polanski (specifically Repulsion), Argento, and even Lynch (who Aronofsky seems to have extracted from not only with an aggressive lesbian scene that recalls Mulholland Drive, but also in his use of wide-angle close-ups that flatten and deglamorize their subjects much like in INLAND EMPIRE, but in a more transparent and less affecting manner). Black Swan's tricks largely seem to not be its own, and when Nina cathartically kills a "dark side" of herself before blowing away the audience in her final dramatic metamorphosis, it becomes doubly evident. 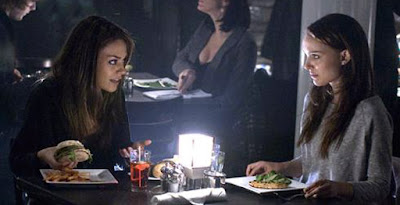 The human objects of Black Swan are given one role to play, one emotional register through which to direct their behavior towards Nina (this being a film in which everything comes at Portman); the director is the sexist prick who awakens feelings of self-inflicted sexual repression in Nina, Lily is the overtly sensual ballerina who possesses the skills Nina blatantly needs to have the full package as a dancer, and the mother is the overzealous caretaker with a history of her own faded glory. This heightened level of design is entirely the point given that the film is a mechanism of Nina's subjectivity, but it falls apart when there's little base of psychological or emotional depth to begin with in Nina. There has already been lofty praise for Portman's performance, and it would be disingenuous to call it off-base. In the limiting manner in which it is written, it's a tough, durable, and sometimes heartbreaking embodiment, but it is certainly not dynamic or varied, lacking the layers of emotionality that Mickey Rourke brought to his role in The Wrestler. As good as Portman is expressing naiveté, despondency, and personal imprisonment, the script ultimately makes her just that, a bundle of whimpers and half-convinced utterances.

I don't mean to suggest that there's a total lack of virtue in Black Swan. The purely experiential aspects of dancing, for instance, which can be enjoyed for reasons exclusive to the story, are conveyed adeptly by Aronofsky's swooping camera, rarely coming to a halt when privileged to the wondrous swirling motion of bodies. In one particularly exhilarating touch, the camera adopts Nina's viewpoint as she pirouettes for Thomas, creating a blur of motion before pausing momentarily on his domineering gaze. Also, just as with wrestling, Aronofsky captures the abject and less obvious body horror of ballet dancing, lingering on nail-biting close-ups of outstretched toes, pulsing back muscles, and stiffened calves, until of course he hammers the point home with recurring shots of these same body parts replete with various scrapes and sores. Unfortunately, when the film's fleeting pleasures reveal themselves quickly as oppressive narrative devices, the pleasure's sucked away. If there's one lesson Aronofsky needs to learn again as a filmmaker, it's what two of his co-stars didactically repeat to Nina throughout the film: "just live a little".
Posted by Carson Lund at 11:39 AM

I liked this much better than you, as my latest, recently posted conversation with Jason Bellamy shows. I'd agree it doesn't have the depth of Lynch's thematically related work, but I don't think Aronofsky's really reaching for Mulholland Dr. so much as the psychosexual spectacle of Paul Verhoeven. It's a gaudy, goofy, tonally varied film, and though it does look back to the wallowing-in-misery style of Requiem for a Dream, I think it does so in a much richer and more emotionally varied way. I never liked Requiem much, and I think this film shows Aronofsky going back to that well and having some more fun with it for a change.

And the guy on the train, incidentally, is played by the same actor who harasses Max on the train in Pi. Black Swan has lots of callbacks to past Aronofsky films, suggesting that he sees it as something of a career summation — as do I.

Thanks for commenting Ed. I actually am in the process of reading your latest conversation piece. As usual, it's enlightening and challenging; great work! You're bringing up certain richer qualities about the film I noticed but didn't fully engage with because I was so frequently distracted by its cheaper, more unoriginal elements. To be honest, judging by your reception of Aronofsky's earlier films in the previous conversation, I expected you to be less than impressed with this new one. I'm not willing to forgive its manipulative, hopelessly bleak aspects as easily as you do just because it is "gaudy" and "goofy". For me, it's less a "tonally varied" work than it is a distractingly chaotic and often times mind-numbingly redundant work. Just because Aronofsky can wink at his audience doesn't mean he's harvesting anything particularly compelling or complex thematically.

I don't dislike it as much as you, but the issues you raise are sound - a number of them are my issues with the film. Few things annoy me as much as the way that the film seems uninterested in Nina, except for the sake of playing archetype meaning that Portman plays the role in one key - not her fault, but not worthy of the overwhelmingly effusive praise, I say.

Still, in its way, I suppose it is worthy of being seen (and YES, definitely better than Requiem for a Dream).

I'll take wallowing-in-misery over coma-inducing navel gazing, the latter of which describes the The Fountain more than any other film I've seen in the past few years. I agree The Wrestler is Aronofsky's most mature film, but The Black Swan is to me just as good, approaching the same story, as you note, in completely different form. Both have their strengths, but of course I like Requiem for a Dream too, which points to the heart of our difference.

I just saw the film yesterday, incidentally, and feel compelled to take back all the nasty things I ever said about Natalie Portman. She's proven she can act after all. On the other hand, that's probably as much to the credit of the director as herself -- like the case of Tom Cruise in Eyes Wide Shut.

Interesting. "Coma-inducing navel gazing"? I think if anything, that describes the rest of Aronofsky's oeuvre, everything except for The Fountain. (I personally don't find navel-gazing to be an inherently negative trait - one might call it supreme focus and dedication - but that's beside the point.) To me, The Fountain represents Aronofsky's most hopeful, self-aware film, one that covers a plethora of beguiling themes with a great deal of honesty. It's about accepting that life might be all there is and making the most of it while it lasts. What's more, it's deeply ambiguous, which beats the suffocating determinism of most of his stuff.

I'm curious what nasty things you said about Portman. I think she's a pretty strong actress, but this might be one of her most uninteresting roles. Her brief work in Wes Anderson's short Hotel Chevalier contains more emotional nuance and depth than the entirety of her character in Black Swan, in my opinion. Oh, and Closer, and Garden State - she's something special if you ask me, full of versatility.