The Wrestler (2008) A Film by Darren Aronofsky 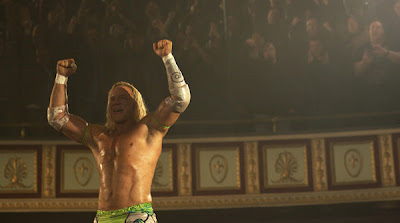 In Darren Aronofsky's brief career arch, which is 75% full of highfalutin, far-reaching art films with variable sparks of genius, the relatively modest and level-headed The Wrestler is both a big refreshment and a stunning turnaround in style. It tells an ultra-straightforward rise-and-fall story about a washed-up pro wrestler going by the typically bombastic pseudonym of Randy "The Ram" Robinson (Mickey Rourke) that would threaten to drown under the pressure of its own pastiche if not for Aronofsky's nondescript, stoic presentation, not necessarily any kind of deconstruction of the chosen genre but a purification of it, a method that gives this hackneyed form some room to breathe. Randy is going through what many has-been athletes of his age go through: deteriorating health, accumulated issues related to the performance-enhancing drugs piling up in his system for decades, potent nostalgia for the glory years, and a dwindling fan base, all of which raise the difficult prospect of retirement. On top of it all, Randy's funds are low, he has trouble obtaining enough hours at the local supermarket where he hauls heavy crates around, and he is entirely alone with a cynical college-age daughter named Stephanie (Evan Rachel-Wood) who has pent-up hatred towards her mostly disengaged, unloving father. It's a situation that is ripe for sappy sentimentalizing, but Aronofsky doesn't do what so many of the film's countless predecessors did. He doesn't simplify Randy's struggles, and doesn't blindly suggest an unlikely U-turn of fortune; this is an earthbound, working-class piece of approximate realism.

The uncanny congruence between the trajectory of Mickey Rourke's own life and celebrity and that of his onscreen counterpart was beaten over the head upon the film's release and remains unavoidably integral to The Wrestler now. Rourke was born to play Randy, a man who once luxuriated in the fruits of his fame and has since withered away, yet comes out of his dormancy with his limbs intact. Aronofsky wisely lets the film rest almost solely on Rourke's mammoth shoulders, and The Ram's overwhelming physical presence - a meticulously sculpted, constantly groomed frame, androgynous golden locks of hair - positively dominates the film. He's there in every scene, lumbering around his passion and his bad choices, and Aronofsky forces the audience to get to know and ultimately sympathize with someone who can so gleefully indulge in perverse behavior such as fudging bloody violence and exploiting women at the local strip club where his love interest, the bodacious Cassidy (Marisa Tomei) works. It is through this wrenching performance, a careful balancing of regret and perseverance, absent-mindedness and thoughtfulness, that The Wrestler lives and dies as a character study, not some lofty scheme in Aronofsky's hands.

This is not to suggest that Aronofsky is just bumbling around half-assed and uninspired, failing to provide any thoughtful directorial involvement in a film that is otherwise saved by Rourke. In fact, it's actually Aronofsky's most comparatively subtle, nuanced direction yet, containing only a handful of aesthetic hallmarks in its palette rather than an overload of ideas. He shoots for a Dardennes-style realism, a motivation he tinkered with before in Requiem for a Dream but got caught up in stylized tilted camera hijinks in the process. Here, he and cinematographer Maryse Alberti's delicate wobbly-cam dynamics don't get in the way of the story being told, and for the most part construct and maintain a sense of verisimilitude and (with the exception of a plethora of slight jump cuts) plausible time and space. This platform is supplemented by some relatively animated choices. An interesting touch is Aronofsky's drudging repetition of the intimate following shot, images whose allusions to those familiar sports arena back hallway shots are cleverly counteracted by the fact that Aronofsky is tirelessly committing not just to Randy's momentous walks to the ring but also to his monotonous routines, like trudging through his trailer park or the corridors of the supermarket. The implication is that Randy can only live comfortably in his triumphant world of wrestling, even as the images remind us of his increasing remoteness from glory and sustenance. 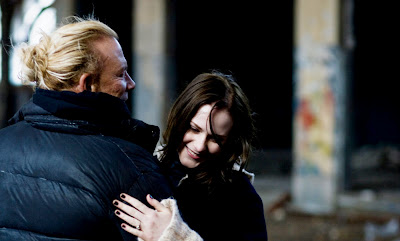 It is clear right off the bat that Randy has fallen from grace in terms of his actual wrestling career, left to perform in dinky rooms against wannabe amateurs before rowdy crowds of approximately 200. In a series of slyly humorous scenes that reveal the backroom machinations of pro wrestling and underline The Wrestler's double role as a satire, Aronofsky makes it evident that the camaraderie between the men and Randy is purely borne of humble respect for his past triumphs. His opponents do not gawk at his larger-than-life stature or form subliminal antagonism out of jealousy. There's an unspoken understanding that Randy is losing his spark, and that whatever can be done to keep it burning faintly should be done. Therefore, each match Randy partakes in is farcically premeditated to result in a victory that will keep the small crowd drooling and riled up. Yet despite all of the artificiality of these "competitions", Aronofsky shoots them with such a closeness and rigor (reminiscent of Scorsese's work on the boxing scenes in Raging Bull), and the actors perform them with such gutsy dedication, that they obtain a level of unexpected savagery and believability. As these often graphic matches progress (one scene in particular between Randy and a staple-gun specializing newbie thoroughly earns its self-referential Passion of the Christ comparison shortly thereafter), one wonders whether the wrestlers have for some reason mutually abandoned their prior pact and are actually out for blood. This tiny gulf between fakery and reality extends from Randy's deeply posed lifestyle and Cassidy's seemingly sincere rapport with her licentious clients right through to the very film itself, which frequently walks the line in the middle of heartfelt authenticity and Hollywood superficiality.

Given this particular thematic concern, it's perhaps inevitable that the film does drift into sentimentality at times. One specific subplot about Randy's attempt at reconnection with his estranged daughter (who he "thinks is a lesbian", and wonders whether this will effect his decision on a present for her in a scene of deadpan humor) is criminally underdeveloped, resulting in a series of unpersuasive emotional leaps from hatred to sudden acceptance to utter indifference. Furthermore, Randy's finicky, juvenile boss at the supermarket (Todd Barry) is such an absurdly caricatured figure that he's nearly unwatchable for the few short scenes he is involved in. Yet these dramatic blips seem to be consistently redeemed by the strength of another clump of narrative, such as the story of the romantically doomed Randy and Cassidy (Tomei giving a satisfactory performance that holds its own against Rourke's star profile). Most of all, claims of by-the-numbers dullness are undermined by the fact that Aronofsky thankfully provides no deterministic catharsis, realizing that Randy has really dug himself too deep to be spared a conventionally happy ending, even as the film faintly jabs at such tidy resolutions. As the final shot implies, Randy is doomed to discover comfort and transcendence only in the wrestling ring, even if it threatens his own life.
Posted by Carson Lund at 7:13 PM

One of my favorite films, so I'm glad you wrote about it. I agree with a lot going on here, but I have a couple gripes with your analysis. I don't necessarily think the daughter subplot was underdeveloped. The build up to acceptance was nicely paced, and then their relationship abruptly ended which I think showed how much of a fuck-up Randy was, and how he was meant to be nowhere else but in the ring. The Todd Barry scenes were comic relief, pure and simple. I neither loved them, nor hated them, and just sort of took them for what they were.

My main beef is with your 2nd to last paragraph in which you describe the film working as a satire and those scenes as humorous. I entirely disagree with this, and feel that this outlines the mutual respect between the wrestlers, and their absolute devotion to their sport, which they treat almost like an art. They plan their matches in this way, creating almost a plot outline with how the match will go, but not spelling it out completely. Yes, they let Randy win, but in that world, he's a legend who's victories are much deserved, and he in turn offers words of kindness and encouragement to the wrestlers. It's not as dark and serious as other segments in the film, but I think it's absolutely serious and real for what it's portraying.

I'm not saying that the camaraderie between the wrestlers is forced or gawked at. I think Aronofsky respects their determination and creativity, considering what they are doing is not so far from what he's doing as a filmmaker: creating artifice and passing it off as real to a mass audience. What I was saying is that the very fact that he chooses to reveal what's done behind the scenes in a sport that most people knows is "fake" but haven't actually seen the machinations of it is a daring, revealing, and kinda funny move. I think the way the wrestlers communicate with such a shared well of knowledge about certain moves is supposed to be dryly humorous. Maybe it's less satire than it is the simple comic relief that you are suggesting the Todd Barry scenes are.

This film is heartbreaking. I put it off for as long as I could. It took the anger from Sean Penn winning the Oscar to give me the final push to finally queue it up. I guess, somewhat ironically, I owe Mr. Penn some gratitude.

This isn't a perfect film. It has some issues. Carson, I agree on the daughter subplot. To some degree, it felt like it became a quick addition for the sake of lengthening the film by 10-15 minutes. I also have mixed feelings about the final image. I understand the necessity of closing the narrative in the wrestling ring, but to do it with Randy taking the flying crucified Jesus pose...I wasn't the biggest fan.

Issues aside, the film left me wiping my eyes consistently. I'm not one for steady use of hyperbole, but Mickey Rourke delivers one of THE greatest performances of an American actor in this decade. At the core of Randy's layers of nuance rests a profound amount of dignity. The fact that Randy is never reduced to a joke or punchline speaks volumes on the part of Rourke and his collaborators.