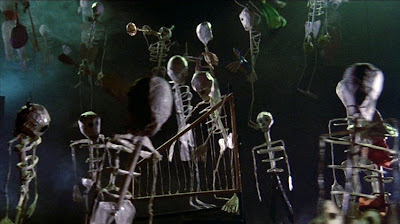 (This is a tardy contribution to Adam Zanzie's John Huston Blogathon over at Icebox Movies. The celebration ran from August 5th to August 12th but Adam is still accepting submissions.)

Faced with the towering question of where to begin in the prolific 40-year career of John Huston, I resorted to the relatively safe assumption that a director's later films often display the very heights of their respective skill sets. Just as Stanley Kubrick, Luis Bunuel, and Alfred Hitchcock all have arguably stronger outputs throughout the second halves of their careers, I wondered if the same might apply to Huston, the old English studio hand with such classics to his name as The Treasure of the Sierra Madre and The Maltese Falcon. Even though his first 20 or so films are often the most star-studded, epic, and canonized, I hoped to discover a late career gem out of comparative obscurity, a film with less clout but maybe no less gusto. The resulting choice was Under the Volcano, a surreal, fatalistic character study that might make you feel as drunk by the end of it as its perpetually inebriated central character, a recently resigned British consul named Geoffrey Firmin (Albert Finney) who is in nary a scene without a jug of hard liquor clutched at his side. Living in a recondite Mexican town with perhaps no plans of leaving the place he no longer has obligations in, Geoffrey's a drifting man, complacent with just stumbling around town day in and day out, meeting new people haphazardly but forming no lasting connections.

In drunken trances, Geoffrey mumbles about desperately wanting his ex-wife Yvonne (Jacqueline Bisset) back, yet it is because of his immaturity and reckless behavior that he refuses to step back and realize that she has been sending him letters all along. It turns out she has been prepping for a return to Mexico in hopes of rejuvenating her relationship with the unstable Geoffrey, fresh off an ultimately unsuccessful marriage fling with his younger, suaver half-brother Hugh (Anthony Andrews). When Yvonne does arrive, appearing angelically in the entryway of a street-side cafe that Geoffrey is drinking and heckling surrounding customers in, it's as if he fails to recognize her as a living, breathing human, taking brief glances and turning away systematically to prove to himself that she's not just a hallucination. Finney's showstopping performance - though at times a histrionic overestimation of an alcoholic - is at its most nuanced during these initial scenes of reconnection, conveying the simultaneous shock, awe, and hesitance of the encounter without losing a palpable sense of hysterical disorientation. Most of all, the film acquires a much-needed element of humanity when Yvonne enters the picture. As evidenced by the first fifteen minutes of mostly unintelligible, insignificant verbal exchanges, Geoffrey is so off his rocker that he needs a foil like Yvonne who can breathe life into him, illuminate the emotions that are so deeply buried beneath his scrambled exterior.

In fact, even with Yvonne prying for his sober attention slowly and carefully so as not to ruin the second chance too disastrously, Geoffrey is a monumental prick, and it's both a wonder that Yvonne has any desire to be with him and a testament to the emotional complexity of the film that it remains compelling even with Geoffrey hogging nearly every frame. He's such a pain that we almost wish death upon him if he can't clean up his act, and it becomes clear that that's the very structure Huston embraces, adopted from Malcolm Lowry's literary source, a book long considered "unfilmable" for its principal focus on the internal mayhem of Geoffrey, described in long-winded, flowery prose. Lowry's novel touches on the last 24 hours in Geoffrey's life, and so too does Huston's film, which begins with an abstract credit sequence of slowly swinging stuffed skeletons in a foggy black abyss, an immediate, straightforward portent of the impending death. What's more, the film (and the book for that matter) are set within the timeline of the Day of Death in November of 1938, an annual Mexican commemoration of the deceased. If not for this intriguing milieu, Under the Volcano might just be a standard character study. It is precisely this dreamlike world Huston and esteemed production designer Gunther Gerszo recreate - in which gaudy devils and grim reapers coexist merrily with the passersby on a bustling sunny day - that infuses the story of the self-destructive Geoffrey with such foreboding resonance. The grotesque figures seem to be constantly ushering the path to the end of his life with eerie contentment. 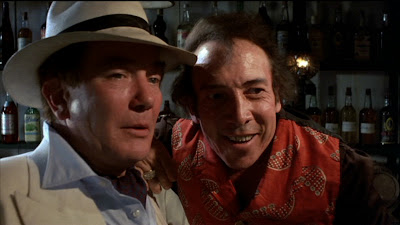 Under the Volcano is ultimately a film about performances, the kind of work that is talked about almost exclusively in terms of its characters. It's no surprise given the extreme literary inclination of its director, for whom solid material nearly always meant a pre-existing novel. In this case, Huston takes a Lowry novel that is slippery, impressionistic, and often plain abstract, qualities that one might deem "cinematic", and morphs them into an arguably more "literary" form, a linear, prosaic documentation of Geoffrey's final hours. Even Huston's sedate direction - the drama primarily unfolds in medium shots, everything is in deep focus, presumably the polar opposite of Geoffrey's actual intoxicated vision - approximates theater rather than film, and it seems an attempt to give the performances an egalitarian scrutiny, to not stifle the drama with overbearing cinematic techniques. It is not until the first outward display of emotional turmoil that Huston allows the characters the luxury of the close-up with a blurred background, when Geoffrey begins by passionately advocating for a new beginning in a small Northern village ("where the year is divided into seasons") and almost immediately doubles back on his enthusiasm to humiliate Yvonne for her temporary re-marrying. After this punishing scene, the film takes its rather sudden leap towards the bulk of its emotional epiphanies, culminating in a lengthy sequence at a sleazy, off-the-beaten-path tavern where Geoffrey, in a fit of anger, confusion, and of course, severe drunkenness, incidentally sleeps with a prostitute and finds himself at gunpoint with a gang of Mexicans suspicious that he is a Russian spy.

Save from a frankly absurd climax involving an ethereal white horse that unexpectedly tramples Yvonne as she triumphantly sprints to save Geoffrey, this final showdown at the tavern is the film's most skillfully orchestrated sequence, a gradual crescendo of the grotesque that amplifies the negative effects of Geoffrey's disastrous obsession. The film's not entirely devoid of interesting visual tactics, and here it's most evident; Huston creates a sense of euphoric disorder through his repeated employment of gnarly close-ups on the bizarre regulars at the bar, like the dwarfish owner or the expressive fiddle player in the corner. It's also where Under the Volcano reveals itself as a film that is first and foremost about the grotesque and the way it infiltrates both life and death. Geoffrey has reduced himself to one of the measly skeletons seen reflected in his black sunglasses at the beginning of the film, a figure without a soul, a purpose, or a fighting chance. He's burrowed himself too deep into his own drunken abyss, to the point where he can't communicate coherently with those around him. Even worse, his own fate entails the fate of his doomed lover as well. Though not an entirely rewarding or multi-layered experience, Under the Volcano succeeds in conveying the earth-shattering effects of an alcoholic on himself and those around him, a fatal flaw that can strand a man in obscurity and leave him to die confused and aimless.
Posted by Carson Lund at 5:35 PM

Carson, I wouldn't miss including this piece in the blogathon for the world. It absolutely nabs down Under the Volcano in all of its angry, tipsy glory. I can't say for sure when I'll finally have uploaded the tally-up post that gathers up all the submissions so far, but I will not leave this one behind, that's for sure.

Though I wouldn't say it's a masterpiece, I definitely think Under the Volcano is one of Huston's most powerful and thought-provoking films, partially because of what's right and what's wrong with it. Perhaps the supporting characters could have been tweaked up a little more, for example. But then again, the film is Geoffrey's movie, and his spiraling down into a private hell is done so subtly that you almost would be surprised that this subtlety came out of the hand of Huston, a classical filmmaker. Like I said over at Kevin's blog, Albert Finney's performance here may even surpass Ray Milland in The Lost Weekend as the best alcoholic performance ever in American movies. Each and ever scene feels like it's foreshadowing his inevitable gory demise.

Also interesting is the way the political subject matter is handled. Those Mexican Nazis at the end sure are mean, but ultimately the film isn't about fascism or WWII. Huston was like that with most of his war films. He wasn't always concerned with politics or why wars are fought--he just wanted to see the breakdown (or triumph) of the individual. While this might have been a confining agenda for him at times it no doubt resulted in some of his best films--namely The African Queen; Heaven Knows, Mr. Allison; Key Largo and even Wise Blood, which deals with a veteran who is destroyed not by wartime but by the commercialized, neo-religious viper's nest awaiting him back home. If you get the chance to see it, I also highly recommend his 1946 documentary Let there Be Light, which showed WWII veterans suffering in a mental hospital and for that reason was banned until the 80's, around when Volcano got its release. Huston is never mentioned among popular auteurs but I think he's like Kubrick or Altman in that once you started watching film after film of his, you're bound to get hooked.

I can't think of many drunken performances in the movies. It almost seems like a neglected topic, but I guess from what I do know, Finney's work would be the best. Yet I'm still not completely enamored of his performance, and I look skeptical upon all of the consuming praise for it. There are moments of real nuance, but other times he's just acting like a buffoon.

I'm not sure I agree completely with the notion that his spiral into hell is subtle. It certainly doesn't sneak up on you. Huston is visually suggestive throughout the film, and the climax practically jolts Geoffrey forward in terms of character progression, or lack thereof. But I don't necessarily see this is a bad thing, because I guess it's hard to be subtle in the face of a rapidly destructive alcoholic.

I'll be sure to start seeing some more Huston.

Mostly what I find subtle about Geoffrey's disintegration is that Huston doesn't go for any flashy, experimental techniques to show what is happening to him. So there's no Clockwork Orange-type emphasises on his living hell and how it is slowly bubbling up. It's just raw alcolohism. Of course, it's possible for filmmakers to do a great job of making alcolohism over-the-top, but I appreciate how Huston prefers to keep it real. Except for maybe the scene in the upside-down ride, which was maybe not so realistic... though I couldn't stop laughing.