Fitzcarraldo (1982) A Film by Werner Herzog 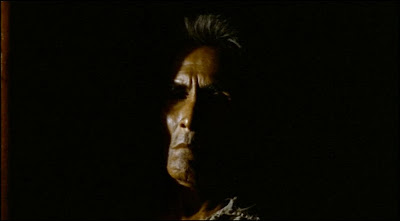 By virtue of its tumultuous production, Werner Herzog's Fitzcarraldo has managed to give credence to the outlandish critical notion that the logistical aspects of a film's making should be weighed into a final judgment on the actual quality of the work. In other words, if blood was spilled to produce a series of images on celluloid then that has a bearing on the integrity of the finished product. I don't hesitate to call this absurd, unfair, and utterly wrong. Declaring Herzog's lumbering creation one of the greatest in the medium on that grounds that it took years to film, survived several episodes of recasting and reshooting, incorporated the muscle power of real Amazonian jungle natives, and featured the literal hauling of a massive steamship over a mountain does a major disservice to the actual work. There's a reason these tales of behind-the-scenes tomfoolery are normally shielded from the general public; they shouldn't cloud the end result, what's actually onscreen. It speaks of a culture more infatuated with hype, sensationalism, and myth than it is concerned with art. No matter how stunning and revelatory Les Blank's documentary on the film's production (Burden of Dreams, 1982) might be, I can't help but think it does nothing but continue to feed the wild legend of Herzog and suffocate the oeuvre of Herzog.

It's curious, then, how Herzog has to some extent built his career around myth and labor and offscreen sportsmanship, so much so that these seemingly trivial aspects feel consciously intertwined with the work itself. In Fitzcarraldo, for instance, it's impossible not to liken its central premise of a German opera-loving entrepreneur, Brian Sweeney Fitzgerald (Klaus Kinski), devising the scheme to exploit a deserted area of the jungle for its rubber in hopes of bringing an opera house to an otherwise remote, impractical landscape with the similarly far-reaching scheme of Herzog, to painstakingly document this man and join him in his mission in the process. He's taking the incentive to support, finance, and realize this lofty dream, completing and even exaggerating the story of the real Irish entrepreneur the film is based on. Thus, the physical process of the plan often seems the point. It's a challenging scenario in which the film's existence depends entirely on Herzog's own capacity to finish what he's started, to defeat every real live obstacle that comes in his way. When the steamship is finally tugged over the mountain in the film's signature sequence - a feat of manpower only necessary to shortcut the path to the crew's destination and avoid a treacherous stretch of rapids - the emphasis is squarely on the physicality of it all: the heavy turning of the makeshift wooden levers, the slow crawl of the steamship, the sweat brimming off Fitzgerald's (aka Herzog's) forehead in anticipation, and the exhausted moaning of the army of natives.

As a result, this is an extremely bizarre adventure movie, less a delicate refinement of cinematic craft than it is a messy, manly sprawl towards the end result. Or, to put it simply, an experience more like hiking than movie-going. Herzog's direction is at its most scattershot and unrefined, at times displaying little to no evidence of storytelling efficiency, staging skill, or spatial awareness. And I don't necessarily mean this as a criticism, for the film's unabashed "wildness" - one of its greatest virtues - is, intentional or not, a suitable counterpart for its increasingly out-of-control protagonist, a pompous, insensitive hack clearly not cut out for unregulated exploration and leadership. Furthermore, exposition and narrative-building prove to be the film's poison in the nearly hour-long introduction to Fitzcarraldo, a meandering chunk of scenes detailing Fitzgerald's (known to the Peruvian natives as Fitzcarraldo) passionate attempts to acquire funding for his journey. The slew of legal hands he encounters do little more than chuckle at him, what with his unkempt blond coiffure and resume of dashed hopes (a trans-Andes train line already failed), so eventually he turns to his devoted wife Molly (Claudia Cardinale) for the money. The best scene amidst all of this endless, ponderous narrative padding is a moment when Fitzgerald and his wife flirt and makeout on a hammock and Herzog chooses to turn his camera towards a baby leopard in the room instead, admiring its wide-eyed, naive awe at the display. 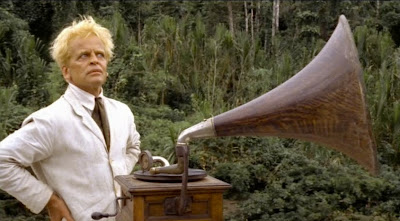 This is a significant moment because it points towards Herzog's fundamental forte as a filmmaker, his spark in the face of all that is wild, natural, and largely undirectable. That the film distinctly picks up steam (pun intended) as it distances itself farther from the comfort of civilization and closer to the savagery of the jungle natives is a ramification of Herzog's own trailblazing persona, the positive relationship between his determination and creativity and new, unfamiliar surroundings. Fitzcarraldo's most moving sentiments deal with the futile grasping onto familiarity and routine even as things grow increasingly alien, witnessed in Fitzgerald's defensive blasting of a Caruso opera from his phonograph in hopes of hushing the invisible tribe enveloping the river, or his regular attempts to interpret the inexplicable actions of the natives through lousy, imprecise translations. In several scenes, Herzog emphasizes the uneasy exoticism of the jungle tribe by eschewing subtitles. They simply swarm the crew, bickering in a distinctive native tongue, their bow and arrows slung as always on their backs, and the uncertainty and tension is palpable.

As expected, Fitzgerald's grand scheme blows up in his face in the end as the natives fulfill their secret plan to steer the ship into the heart of the rapids, which will supposedly rid them of evil spirits. The unpredictability and externality of this force is both emblematic of the lawlessness of nature and is a byproduct of Fitzgerald's flawed ambition. Herzog is quick to point out how nature dwarfs Man, exposing such petty obsessions as a lucrative jungle opera house as the huge absurdity that it is. If he had had the gall to kill off his foolishly idealistic crew right in the climactic moment, as the ship goes careening off the rocks in one of the film's most riveting sequences, a sudden thud of hammer-to-the-head determinism, then the savagery of his satire may have hit even harder. But maybe the dumb celebratory final sequence - in which Kinski smokes the biggest cigar ever made - is a more fitting conclusion, a potent sign that Herzog realizes his own hypocrisies. Killing Fitzgerald would have meant killing himself, cutting short a career that would continue to explore more provocatively than any other filmmaker the links between ambition, art, and failure.
Posted by Carson Lund at 2:15 PM