For a film about a fired corporate scientist who leaks information about his former tobacco company to the CBS show 60 Minutes, Michael Mann's The Insider has no shortage of suspense. It's a premise that looks bone-dry on paper, that would likely be squandered in the hands of a lesser director, but Mann turns it into a compelling psychological almost-thriller, a work that is perpetually nearing a fever pitch in tension but never quite gets there, yet remains exciting in an edge-of-your-seat kind of way regardless. Russell Crowe, in a rare role of interest, plays the eponymous protagonist Jeffrey Wigand, a brilliant but emotionally volatile Louisville-based chemist whose continuing support for his family is put in jeopardy once he loses his distinguishable career with Brown & Williamson Tobacco for cloudy reasons. The vigilant 60 Minutes journalist/producer Lowell Bergman (Al Pacino) excavates the story and contacts Wigand, understanding of his personal predicament but lightly persuading him to unveil his potentially shattering secrets to the nation. Though Wigand is deeply skeptical at first, unwilling to let anyone into his now damaged sphere of personal stability, Bergman eventually becomes his trusted defender, guiding him wearily through towering litigations from his stern, cryptic ex-company and ominous threats to his family's safety from an unknown source.

We never know whether the source is ultimately real or imagined, and the ambivalence is what drives Wigand's drama. The film is loosely divided into two disparate sections, the first of which amounts to a fairly straightforward thriller capitalizing on Wigand's consuming grief and growing sense of paranoia. His precarious feeling that he is being watched and his time is running out has an eruptive impact on those around him, and it manifests itself in all he does. In one instance, a characteristic bit of Mann introspection, Wigand is alone at a driving range late at night. While hitting golf balls to displace the crisis (a Brown & Williamson document he signed has a privacy agreement that could jeopardize his family's health insurance should he choose to advance his relationship with Bergman), he notices another solitary figure several stations away in a black suit. The entire sequence is reducible to a simple progression of exchanged glances, but Mann ratchets up the tension with his moody dark green palette, his generous employment of suffocating close-ups, and his occasional focus on the minute details of golfing, like a ball swooping into a back net. One begins to wonder if these are just ghostly manifestations of his own paranoia, men in professional attire appearing only to taunt Wigand, to convince him to take the easier route. Later, when a security team hired by Bergman arrives at his house as he drives down the street, Mann provides a brief traveling point-of-view shot of a black-clad guard, which immediately elicits hysterical anxiety. But, a moment after when the man is revealed as a security guard, the joke is on Wigand, and the audience.

Mann is gently manipulating the audience in such a way throughout the film, but he's doing so less to augment the thrills and more to place us in the cognitive positions of the characters. In another sequence, one of the film's most expertly crafted and viscerally effective, Wigand wakes up in the middle of the night to his young daughter telling him she heard a sound in the backyard. He frantically escorts her to the basement, advising she stay put while he secretively retrieves a gun and heads outside. His subsequent search of the yard - a tense, funereal march loaded with chilling red-herrings - is intercut with shots of his daughter downstairs. The sudden automatic firing up of the hearth is a heart-jumping cut that frighteningly gives the impression, at least at first, that the supposed intruder is in the basement. Moments later, Wigand's daughter steps outside - the way that any curious young girl would - while her father spies a conspicuous footprint in the dirt. There's no doubt in my mind that Mann is aware of the disquieting possibility that Wigand would shoot if he heard a sudden noise behind him, killing his daughter unintentionally. So he lets the moment simmer until finally she speaks up and he responds accordingly, a touching father-to-daughter fib that temporarily diffuses the pressure. Crowe's performance reaches its high point during scenes like these, when he's forced to make a startling emotional turn that highlights his duties as a masculine protector and a nurturing family man, and the overbearing difficulty of balancing both. 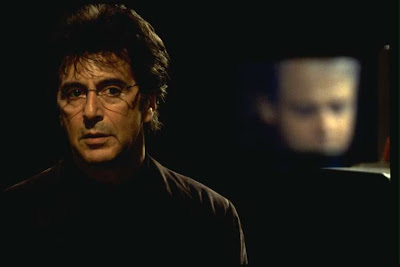 Dante Spinotti's long telephoto images and ultra-shallow depth of field create a visual equivalent to this constant apprehension, a feeling that danger is closer than expected and the blurry outsiders are not to be trusted. Often times Mann is framing his characters in an oddly incomplete manner, cutting off one half of their face or leaving just an ear in the frame, taking it further by fiddling erratically with the focus. The result is a collection of Hollywood abstractions, denaturalized images that deny the conventions of how a star's facial features are normally processed. It's fitting for a film that is primarily about distortion of truth in our country, through media, through deceitful corporate enterprises, and through the filter of others. When Wigand does agree to the interview and the final 60 Minutes program is completed, CBS does not show it in its entirety for fear of being sued by Big Tobacco, and a later, seemingly more revealing public version has Wigand reduced to a censored, pixelated blob with a monotone drone - in other words, a whistle blower sucked of his life. Mann seems to ask, how can we trust information that is so manipulated? Does the news network's refusal to reveal the story in its complete, actual form signal a fabrication of intent as dishonest as that of the corporation it attempts to expose?

Pacino's character, who is the spotlight of the second, more behind-the-scenes, journalistic portion of the film, seems to be aware of these questions, and he assumes The Insider's moral center. In the final thirty minutes, he is doing an existential juggling act, pondering the true worth of a profession that can destroy a subject's life (Wigand's wife divorces him, one of the primary reasons being his perpetual endangerment) and produce results that are only skimmed over by the American public. One of the important things Mann's film does is it forces the audience to live the treacherous vulnerability that comes with working a job involving the bringing to light of such under-the-radar topics. He questions the ethical dimension of it, mirroring the ways in which Wigand's own personal life is infiltrated by the political mongering. It becomes clear that Pacino's Bergman is the film's real main character, the most salient bearer of the film's themes and sentiments, and his performance is consistently stunning. Though Mann's forte is the crime genre, I'm always impressed by his level of sincerity and engagement with more diverse topics. The Insider is proof. A trigger is never once pulled, but the hard-boiled tension and psychological rumination remain intact.
Posted by Carson Lund at 9:08 PM