Western (2017) A Film by Valeska Grisebach 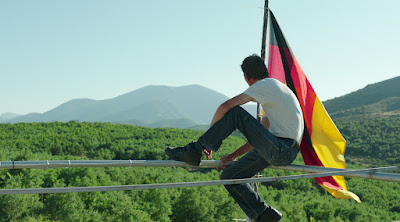 "'War is war. Life is life. You can’t lump them together,' says a burly construction worker early on in Valeska Grisebach’s Western, immediately invoking the dichotomy between civility and savagery at the heart of the genre referenced by the film’s title. The seasoned audience member will recognize the hollowness in such a statement, as the most ageless westerns have proven time and again that violence—physical and otherwise—is the engine of civilizing progress. And though blood is scarcely spilled in Western, the film nevertheless teems with nervous tension as a German construction crew descends on a modest Bulgarian village to conduct work on a hydroelectric power plant in the hills nearby. In a supremely understated style, Grisebach sets this all-too-modern scenario in motion and charts the ways in which power and privilege unconsciously manifest themselves, turning a boilerplate engineering initiative into a loaded culture clash."

I’m the Community Manager with Anagram Interactive, where we specialize in connecting established brands with prominent bloggers. We’re currently working with Paperless Post, a company that designs customizable online and printed stationery, to show that communication can be personal and well-designed regardless of the medium.

Paperless Post has partnered with several world-famous designers and lifestyle brands, including kate spade new york, Oscar de la Renta, Jonathan Adler, and Rifle Paper Co., and has delivered over 85 million cards to date. Since you have such an engaging and beautifully-designed blog, we’d like to offer you 1500 Paperless Post digital Coins (a $150 value) for free to try out our online service and write about your experience.

We really think you’ll enjoy Paperless Post and can’t wait to hear what you think. Please let me know if this is something you’d be interested in and I’ll show you how to get started.