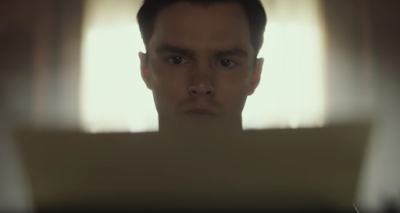 "Making liberal use of inner monologue to give form to Salinger’s feverish stop-and-go writing process, Strong ties the epiphanies and crushing disappointments of the author’s life to key passages within his body of work. In doing so, Holden Caulfield becomes less a spontaneous fictional creation than the logical sum of Salinger’s romantic frustrations, his run-ins with hectoring authority figures, and his scarring visions of Nazi death camps (realized on budget here as blue-tinted glimpses of gaunt silhouettes and hands clutching past barbed wire). The whole affair suggests dramatic Tetris, and it leeches the artist and his process of any mystery."