Everybody Wants Some!! (2016) A Film by Richard Linklater 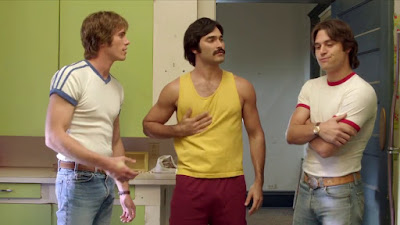 "Just as Magic Mike XXL cast aside threatening social realities to occupy a utopia of its own volition, Everybody Wants Some!! luxuriates in a world that's the platonic ideal of youthful indulgence. It pictures an undergraduate atmosphere bursting at the seams with the usual vices (excessive drug use, dick-first thinking, hazing rituals), yet palpably lacking any sense of menace or predation. Female behinds are ogled, and always by both characters and camera (yet significantly always in that order), but the guys remain goofs longing for affection, while the girls are equally eager to find a companion. Indeed, everybody wants some." Full review of Linklater's latest gem at Slant Magazine.
Posted by Carson Lund at 3:26 PM