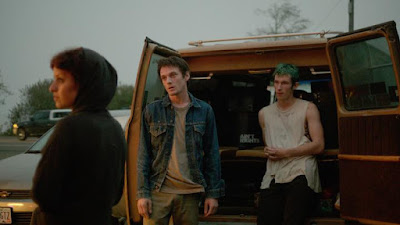 "Bigotry ends up playing little direct role in the reckless murderous corruption that advances the plot of the locked-room thriller Green Room. Still, Jeremy Saulnier bluntly sets the record straight, early and often, that the thugs who run the exclusionary heavy metal club in the backwoods of Oregon where the film is set and who cover up crimes on their own premises are wretched, loathsome pieces of shit undeserving of a space on this planet. When our heroes, a woebegone punk quartet called the Ain't Rights, arrive in the titular backstage lair before a gig they've taken in the express interest of some much-needed cash, the background of every shot is littered with a cornucopia of advertisements for modern history's most oppressive institutions: swastika wall scribbles, Confederate flags, and all kinds of shiver-inducing decals advocating for the supremacy of the straight white male." Review continues at Slant.
Posted by Carson Lund at 12:12 PM