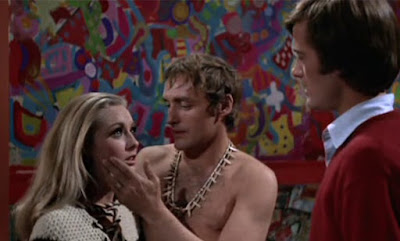 "Roger Corman's The Trip is exactly what one would anticipate an exploitation film made in 1967 about an LSD experience to be, offering its only pretext for its psychedelic indulgences during a madcap credit sequence where hack commercial director Paul Groves (Peter Fonda) is visited on a beachfront set by his wife, Sally (Susan Strasberg), with whom he's going through a divorce. Despite nearly being swallowed up by a jagged Electric Flag fusion number blaring away on the soundtrack and interfered with by title cards set against what looks like swirling colored molasses, the brief exchange between the couple is lovely in its understatement, with currents of regret and longing coursing implicitly through their shared glances as lines of communication are interrupted by the chaos of the shoot." Review continues at Slant.
Posted by Carson Lund at 3:53 PM