Metropolitan (1990) A Film by Whit Stillman 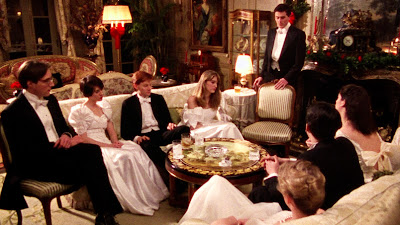 One could imagine even Luis Buñuel, the famously scathing critic of the bourgeoisie, warming up to Whit Stillman's wry, patient debut Metropolitan, a film with an unapologetically affectionate perspective on the upper-class. At the very least, Buñuel, who, coincidentally, is one target of the relentless verbal gamesmanship in Stillman's film, would have hesitantly applauded the American director's confident simplification of space and time, a strategy Buñuel himself tried in The Discreet Charm of the Bourgeoisie. Metropolitan unfolds in the confines of a few ritzy Manhattan apartments (which, with their rich color schemes and baroque furnishings, all look roughly the same) and in a vague portal of time coined "not so long ago" in title screens. Though the setting is specific - it's the Christmas season and a group of vacationing prep school students are getting together to attend gala debutante balls - the film luxuriates in a generic sense of "pastness", and its anachronism is matched by arch performances that have little concern for conversational realism. This is a film that is very much satisfied with its own insular world, with seeming to exist entirely outside the concerns of society.

Stillman uses this detached, formal approach for comedic ends, and it's fitting because the characters inhabiting this milieu are just as self-involved, just as oblivious to "normal" life. The group of friends refer to themselves as the Sally Fowler Rat Pack, named after Dylan Hundley's character, a dainty, stuck-up girl who often appears the most charmingly naïve in the group. Always beside her is Jane Clark (Allison Parisi), her slightly huskier, more self-aware mirror. Of course, in the company of girls like these, there needs to be a third wing, which is occupied by Audrey Rouget (Carolyn Farina), a timid Jane Austen fangirl with the kind of vaguely tomboyish look that characterizes French New Wave starlets. Naturally, the group's most shamelessly articulate, geeky member, Charlie Black (Taylor Nichols) - also the character who dubs the group a part of the supposed U.H.B., or urban haute bourgeoisie - harbors a mostly unspoken crush on her that is disrupted by the arrival of a slightly less affluent Upper West Side outsider named Tom Townsend (Edward Clements). (Much of the audience's awareness of class hierarchies is telegraphed through dialogue about specific sections of the city.) Charlie adopts a knee-jerk distaste of Tom's ways, which he finds unusually conniving and ideologically problematic (he proclaims a devotion to the socialist theories of Charles Fourier and neglects reading books in favor of literary criticism), while the nihilist blowhard of the bunch, Nick Smith (Chris Eigeman), predictably is attracted to Tom's unconventional ideas.

These twentysomethings pursue upward mobility to prevent what they interpret as the foreseeable demise of the U.H.B, but their pursuit is vague and passive, defined by endless stasis and conversation rather than forward activity. What Stillman does show of the dances they attend is brief and fragmentary, emphasizing the idea that whatever they do outside the spacious mahogany rooms where they convene late at night to chat is peripheral and insignificant to them. Instead, love, politics, art, literature, philosophy, and college stories are discussed with the kind of righteous confidence and verve that suggests it's always a put-on, and when Audrey falls for Tom's freckly innocence and proudly contrarian tendencies, the drama that enters their closed circle is enough to confirm there will never be a dull moment. The communication here is controlled, fast, and clever, bringing to mind the fierce comedies of Preston Sturges rather than a twee ensemble piece like The Breakfast Club. Sturges' films were all about structure and pacing, always sacrificing character development in service of the twisty, complicated verbal joke. 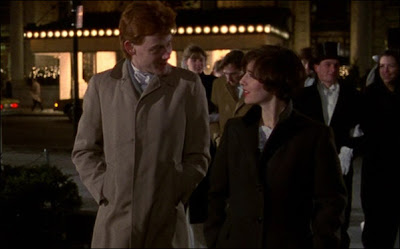 Metropolitan, too, relies on its seemingly effortless but totally disciplined pacing. Stillman's work is defined by the leisurely tempo of its plot trajectories (in spite of the speed of the dialogue) and by its sense of casually and almost imperceptibly integrating central narrative threads. What's so impressive about Metropolitan - especially in light of its status as a debut - is the way these plot kernels build up exclusively through conversation scenes rather than through some of the comparatively expressive visual storytelling of The Last Days of Disco, for instance. The effect is akin to listening in to different parts of a room at a party, gradually picking up details that form a larger picture. As such, Audrey's affection for Tom is first sensed, then gleaned, then hinted at, then addressed in part, then addressed in full, as is Charlie's jealousy, Nick's boredom, Jane's backstabbery, and Sally's immaturity. Because Stillman's characters speak so much, it has the effect of either making the majority of their statements unconvincing or perhaps not fully thought out. And naturally, it makes the moments when characters do not speak all the more suggestive and powerful, such as when Audrey slumps quietly as the group plays a dangerous game designed to spill deep truths, or in a throwaway moment in the third act when Nick leaves the group and turns around in the subway station to wave a bittersweet goodbye.

Instances like these make Metropolitan, in addition to being a sharp, funny film, an unexpectedly moving one too. This is not only a film about how unemployed, post-collegiate friends function in an upper-class milieu, but also how their social class figures into their every behavior and thought, so much so that it produces a kind of lament for their perceived demise. Melancholy weighs over the film even during the lightest stretches of comic verbiage, and it's the product of nothing less than a universal fear of the future. I already mentioned Farina’s resemblance to French New Wave actresses, and the film’s carefree but apprehensive mood is emblematic of that kinship as well. Stillman even has Tom pull a plastic cap gun in his final "rescue" of Audrey at the Cape Cod beach house of notorious jerk Rick Von Sloneker - a moment that echoes Godard's early "girl and a gun" cinema as well as some of the hokey romanticism of Truffaut. It underlines a playful whimsy that runs subtly throughout the entire film, a charming amateurishness that gives additional gravity to the genuinely felt performances of characters who, regardless of their abundant and adult resources, have yet to free themselves from adolescence.
Posted by Carson Lund at 6:11 PM

Excellent review of one of my favorite films. There's so many little nuances here that add so much to repeat viewings. I saw Stillman's new Damsels in Distress last week, and while it's not as good as this, it's still definitely worth checking out. Hopefully he's back for good.

One thing, though--I'm 99% sure they aren't supposed to be college graduates but still in college. If you notice, it's "Christmas Vacation," a description which would make no sense if they weren't still in school. I even think they're in their freshman or sophomore year at school--debutante balls are generally schedule when the girls hit 18, I believe. (And given that Stillman was basing it on his own college experiences in 1968, they would be of legal drinking age as well.) I also am not convinced they're all at Harvard. They keep making references to prep schools, not actual colleges IIRC, but there's also no indication they will all be able to meet up in a week when they're back at school; they're dispersing. I know it's a subtle thing, not spelled out, and the actors are all a bit older, but if you think of them as still mostly teenagers just barely hitting adulthood rather than 23-year-olds looking for jobs, it changes the movie completely, and I think presents a truer picture of their point in life and motivations.

Stephen,
You're probably right that they're not college graduates yet and not all from Harvard (I guess I was just assuming that given Stillman's own alma mater), and also about the fact that their place in life is essential to how the film is read. I wish I had not glossed over that detail. However, I do wonder how much different the film would be if they were college grads preparing for adult life. These characters are so privileged that I'm not sure much would change. If you take a look at The Last Days of Disco, there's not a world of difference between its vision of rich twentysomethings and Metropolitan's. When you have a safety net like these characters do, real economic and occupational concerns might not kick in for a while.

I'm looking forward to Damsels in Distress, and I hope Stillman will be making more films soon as well. He's a really gifted writer with a sensitive eye towards this particular niche of people, a relatively under-represented population in cinema.