From the moment its grimy, grainy, workmanlike opening shots of a mopey Liam Neeson trudging around a hellish Alaskan oil reserve tarnish the screen, Joe Carnahan's The Grey boasts a strange texture for what is allegedly a #1 Movie in America, and it also announces itself as something with much more serious intentions than such a tag would imply. That the film's mostly a hokey, sometimes ludicrous, yet entirely thrilling genre piece is both predictable - surely Hollywood can't completely bank on the quiet, dour mood piece suggested by the opening - and a play to its advantage, as its genuine existential underpinnings heighten the film's suspense at every turn, and often take the stock characters on an unlikely trajectory from unmemorable everymen to goofy plot movers to truly sympathetic morsels pining helplessly from the fear of the unknown. In fact, the entire film adheres to this hump-like path, from seriousness to camp back to seriousness, from abstraction to concreteness back to abstraction, and in some ways, from death to life back to death.

Only seconds after Neeson is seen rummaging across the Alaskan landscape and then stopping in at a raucous industrial bar, he is glimpsed aiming a rifle directly into his throat. Something catches his attention and derails him from his mission, but nevertheless the impact is made; this is a film concerned with the ancient question of to-be-or-not-to-be, and by staging a survivalist scenario in which men are entirely at the mercy of the elements, the question is given ample space to elevate in intensity. Neeson's character John Ottway - a shattered middle-aged man hired to protect oil drillers from incoming wolves with a rifle - gets stuck on an airplane full of pompous roughnecks, and then has the luxury of spending his time in the middle of the forbidding Alaskan tundra with these men once the plane crashes in the throes of a blizzard (the first of many to come). Of course, all the rations are dust, and all the potential weapons including Ottway's trusty rifle have been rendered dysfunctional from the high-impact crash, which Carnahan shoots as a bombastic, abstracted whoosh of sound, image, and what seems like a giant N64 rumble pack integrated into the screen and the theater seats (all indicating that this feels a hell of a lot like what it might be like to sit in a plane dive-bombing at amazing speeds). That the director follows this whip to the face with an emotionally direct scene in which Neeson must talk a man quietly through his inevitable death is a testament to his admirable willingness to shift moods in a moment's notice.

Wolves show up shortly thereafter, but these are not the simple, comparatively convincing wolves that prance around the oil reserve; these are ungainly, territorial monsters with an uncontrollable bloodlust. It is here that The Grey's closest genre cousin becomes Neil Marshall's nail-biting cave thriller The Descent, the former being the masculine answer to the latter's deconstructed girl-power. Both films design their beasts largely to put into perspective the place of modern humans in a larger scheme of evolutionary history and nature. Carnahan, hitherto a director of pulpy machismo, has placed big-headed men in a situation that makes them resemble pint-sized fools, utterly helpless against the brutal climate of the wilds and the relentless encroachment of the wolves. Indeed, Neeson, ostensibly the leader and hero of the pack - at least, as this survivalism subgenre would have it - winds up leading his skeptical followers straight into the belly of the beast after every new development. Tools, smarts, and, especially, Gods, have no effect here; in fact, Carnahan shows them being decimated one by one until, in the final ten minutes of this compact 117 minute film, Neeson is bellowing at an overcast sky to an (inevitably) silent Creator. It's no surprise for an American studio picture to be this doggedly Atheist, but it is a welcome shock to see spiritual questioning on such vehement display, and especially for it to be tethered to a simultaneous take-down of masculine swagger. 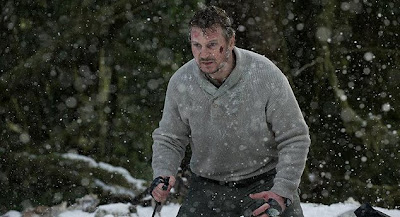 The film is defined by an interplay between long stretches of silence/introspective dialogue and jarring bursts of cacophonous violence, and this speaks to Carnahan's bleak vision of death and nature: there are no warnings, no free passes to consider for a minute or two the scope of your life - there is only harsh, inexplicable chaos. Nature is not only indifferent but malevolent, hurdling over your best defenses and sinking its teeth into your hip when you're at your weakest. Throughout the course of the film, the wolves seem to progressively develop an agreed-upon game plan: before an attack, stop howling. The ensuing silence leads the men into thinking they're safe, only to discover that they've been conned by animals. The conceit of the man-eating wolves is effective particularly because it's a stand-in for the sudden, seemingly cruel arrival of Death, and the relative substance of the metaphor renders the somewhat crude digitization of the beasts negligible (after all, it's when they're offscreen that they illicit the greatest fear, which aligns with Carnahan's idea that thinking about mortality is scarier than witnessing it). It's this unflinching vision of nature as a fate machine that makes the film's final two deaths such haunting scenes. The self-directed suicide by terminal pain-in-the-ass Diaz (Frank Grillo) is startling because it's the first death to be not a direct result of nature's wrath but a cumulative, peripheral one, and Carnahan's long take of Diaz sitting before a painterly view of mountains and river while the sound of wolves - at this point a purely allegorical presence - creep in on the soundtrack is the film's best moment. Then, Neeson has a slim chance to save his last partner Hendrick (Dallas Roberts) from drowning and fails completely at doing so. There are no wolves here, just exhausted men beaten down by the unforgiving world.

There's a lot to be irritated by in The Grey: the abundance of plot holes/continuity errors (the survivors seem to inexplicably gain resources the further they go and somehow Neeson was able to make a quick stop at a shoe store in the middle of Nowheresville) as well as the overbearing cliches/contrivances (apparently all Neeson and his beloved late wife did was lie in bed together in a misty, coffee-tinted room, and a recurring suicide note by Ottway embarrasses in its shameless aspiration to pathos). Not to mention the cop-out ending, which is Carnahan's most self-consciously "serious" maneuver. But there's something that sits nicely about the film's balancing act of exciting genre storytelling and philosophical headiness. Few blockbusters can manage this feat, but Carnahan stumbles upon something difficult to grasp and articulate, which is either representative of a half-baked stew of inquiries or a genuinely profound discovery; this vexing notion of the will to live, which can outlast even a man's self-described miserable life, is engaged with head-on in The Grey, and it's ultimately what lends it its surprising impact.
Posted by Carson Lund at 4:52 PM

Carnahan's long take of Diaz sitting before a painterly view of mountains and river while the sound of wolves - at this point a purely allegorical presence - creep in on the soundtrack is the film's best moment.

I've become way too familiar with your thought process. I saw the film last night, and at this point thought immediately of you. ("Carson will like this scene if nothing else," I predicted).

Anyway, I loved the film -- more than I expected based on the trailer. As you note, a splendid balancing of survivalist thriller and cruel philosophy. You should see The Divide too: ignore the incompetent critics who slammed it, it's one of my favorite post-apocalyptic films of all time.

Well, I guess you've figured me out. I think you like this film more than I do, but there are certainly several more scenes worth noting, most of which come after that moment I mentioned. It's pretty surprising that Carnahan released something like this after The A Team; the level of seriousness is markedly different.