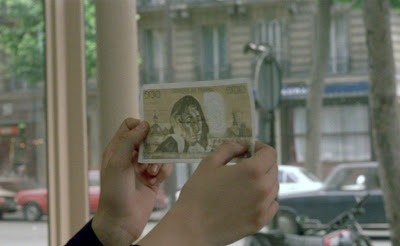 Boiled down to its essential actions, Robert Bresson's final film L'Argent might just resemble a bunch of people opening and closing doors and handing each other money and documents. However, through the precision of Bresson's editing and his rigorous command of compositional space, the film becomes a haunting, suggestive summary work about just how far our capitalistic, materialistic civilization has sunk. The characters in this hushed atmosphere of oppression and doom - in which the omnipotent dictator is money - are the ghostly shells of humans who once possessed dignity and desires and have now become little more than transmitters and receivers. Indeed, for the film's first thirty minutes, money seems more of a character than any single individual; a forged banknote is passed from hand to hand, sparing some and devastating others, and Bresson shoots it in close-up, as if a human face. Finally, after some opportunistic hoodlums spend the counterfeit bill and set off a chain of confusions and disruptions, the seemingly innocent delivery boy Yvon Targe (Christian Patey) puts it to use, unaware of its artificiality, and gets arrested, in the process become the central character of the film.

When reduced to a linear précis, Yvon's ensuing downfall may appear ruthlessly schematic: he loses his job, turns to petty crime, finds himself in jail, loses his child to disease, loses his wife to contempt, and becomes a thief and murderer. But Bresson's construction is so elliptical, his storytelling so pared-down, that Yvon's ignoble path starts to feel less like the product of an inner demon slowly emerging to the surface than it does a harrowing accumulation of survival mechanisms demanded of him and nurtured by a society where rigid institutional codes of capitalism and the judicial system have suffocated single voices and drained essential human values. In this milieu, humans have been cast astray from their natural impulses, instead forced to adhere to the massive governing umbrella of commerce if they want to get ahead in life. There is a suggestion that in such a society, no one can be truly innocent; everyone is either already guilty of betraying the law or is soon to be guilty, not to mention that on a more metaphysical level, everyone is guilty. Early in the film, Yvon attempts to sue the female shop-owner (Didier Baussy) who lent him the counterfeit in change, but she has calculated a lie to the court and bribed her shop assistant (Vincent Risterucci) to do the same. As a result, Yvon is unfairly convicted. Ethics and morality have disappeared, and only transactions remain.

In response, Bresson's style is truncated to a visual language of transactions. Nearly every shot features a hand placing something in a pocket or greeting another hand with something. Greed, deception, and ignorance all find expression through hands, and Bresson finds subtle shifts in the several uses of the body part. At one point, Yvon, hoping to commit suicide, collects the medicine provided to him in solitary confinement through a process in which he receives it from a guard, pretends to consume it, and subsequently hides it beneath his mattress when the guard walks away. Shortly after swallowing his large stash, Bresson efficiently cuts to a shot of a few inmates watching out their small window as Yvon is carried away in an ambulance. The very content of the sequence is communicated solely through body language and the poised intimacy of Pasqualino De Santis and Emmanuel Machuel's claustrophobic camerawork. Verbal communication, on the other hand, comparatively rare and resolutely mundane, is also transactionary. It is telling that the final scene Yvon and his wife share together takes place with a pane of prison glass in between them, their eyes averting each other and their voices abstracted through the small holes in the glass. (This transparent boundary, at once creating a sense of immediacy and distance, might as well exist between every character in the film.) 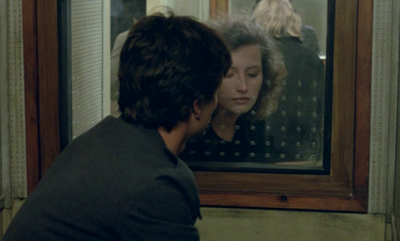 Much of L'Argent's downfall narrative is telegraphed through scenes like Yvon's attempted suicide - that is, through the power of restraint and innuendo. A mysterious scene early on showcases Yvon's desperate quick stint as a getaway driver without revealing much information. Later, it's easy to miss Yvon's inaugural murder, which is reduced to a brief foreshadowing shot of him eying a knife in the prison's kitchen and a subsequent, similarly short close-up of his hands under a sink as he scrubs blood away. Bresson preserves a sense of uncertainty with his clipped, boxy mise-en-scene, always shooting in medium shots or close-ups and refusing to visually complete the space in between people, objects, or actions. Particularly in the first example, there is little concrete evidence to prove that Yvon is indeed the getaway driver because Bresson's austere intercutting between a shot of him looking out of the car window screen right, a shot of policemen pointing their guns screen left, and a shot of two people fidgeting behind the huge glass wall of a bank deliberately restricts a tangible mental construct of the space. An analogous situation exists in Yvon's climactic slaughter of a rural family for a trivial monetary gain. Knowledge of the grisly events taking place arrives either tangentially through shots of a dog skipping across the rooms of the cottage, growling at a perceived intruder, or belatedly in shockingly direct images of fallen, mangled family members. It's a breathtaking, uncompromisingly fierce scene, both for the way in which Bresson stages and shoots it (Yvon carries an oil lamp through the pitch-dark cottage, and its orange light, stretching across the dark brown wood of the walls, quickly becomes a stand-in for his presence) and the way that it represents a sudden culmination of Yvon's misfortunes, a garish outburst of the feelings of anger for being cheated, abandoned, and left penniless that are bubbling within him.

With the exception of this unexpected intrusion of real, visceral horror, the film is pitched at an almost ludicrous deadpan throughout, emphasizing the absurdity of society's hierarchical structures and behavioral norms. Bodies move from space to space as if their joints are constructed with metal, droning voices quickly submerge into featureless surrounding walls, and doors abruptly shut or swing bluntly until they reach the conclusion of their graceless pendulums. Bresson evokes a world where humans have been fenced off from their own environments, where the steel confines of a jail are no different than the equally firm boundaries constructed by society. A recurring shot of prisoners being escorted through a gate - framed such that their heads are cut off and only the gate is in crisp focus - is exquisitely ambiguous: are they entering or exiting prison? And more strangely, does it matter?
Posted by Carson Lund at 6:21 PM