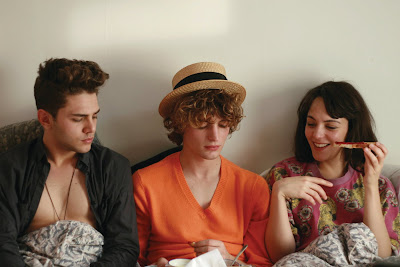 Xavier Dolan's Heartbeats - the Canadian wunderkind's second feature at an astonishing 21 years of age - exists in a milieu where looking a part and acting a part is boiled down to a precise science. Style is the raw material with which characters wage war on each other. When they can't speak their thoughts, they express themselves through their clothing, their hairdos, and the rapidity with which they renew both. The generalized ennui marking their default expressions is a code designed to indicate their lack of interest in communication and their perceived self-assurance, but it really just illuminates how desperately they desire attention. Dolan's signature theme in the film is how the superficial becomes a parasitic growth on the meaningful, an obsession that disguises deeper feeling until it's too late. It would be too easy to lob the same theory at Heartbeats itself, a film so self-consciously concerned with style for its own sake that it neglects great waves of narrative detail and momentum, but it contains too much conviction in its mood shifts and its emotionality to be easily dismissed as "style over substance", or whatever that platitude has come to mean. Dolan's not guilty of creating a prolonged fashion show if only for the sense that he's aware of how style inflects his character's behaviors and motivations, how it plays such an integral role in their psychological metamorphoses.

In the case of the menage-a-trois he has created to express his themes, Dolan has devised a scenario where uncontrollable lust leads directly to angst and madness. Good friends Francis (Dolan himself in the lead role) and Maria (Monia Chokri) both develop an unspoken desire for Nicolas (Niels Schneider), an outgoing, confidently stylish newcomer in their circle of friends with the kind of shaggy dog haircut and laid-back persona that makes him instantly lovable to the shy and disaffected. Such is the situation with Francis and Maria, who are both, in spite of their loud, flashy external presentations, quite troubled internally, choosing to hide their social ineptitude beneath the veil of exorbitantly priced sweaters and countless cigarettes. The film's loose, stripped-down narrative traces the passive-aggressive mongering of Francis and Maria as they vie for the attention of a boy who remains a mysterious surface pleasure throughout, a vexing personality who seems to communicate everything and nothing simultaneously in the courage of his tossed-off vernacular.

Dolan proves to have little interest in fleshing out the particulars of his narrative. Instead, he's content to focus hyper-attentively on the present moment, using (and sometimes overusing) ravishing slow-motion sequences to pick up on every microscopic shift in the emotions of a scene. There are plenty of times when this fetishistic slowing of time suggests Dolan has yet to digest In the Mood for Love, particularly when his compositions - such as that of Maria swaying her birthday present for Nicolas by her side as she struts down the street - are such transparent thefts of Kar-Wai. But in other instances, Dolan is able to capture an enormous amount of emotional clarity in the elongated fleeting moments when Francis and Maria first meet Nicolas for lunch (wherein Francis ducks his head down temporarily in obvious attraction) or when they watch, hypnotized, as Nicolas dances under a strobe at his crowded party. The rejection of traditional characterization here (no back-stories, no casually revealing expository dialogue) makes perfect sense given the decidedly noncommittal qualities of the characters themselves, who'd rather stand like a mannequin in the corner of a party than openly tell you about their lives. 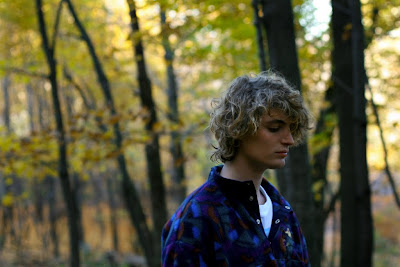 Comparisons to the French New Wave and the souped-up melodramas of Pedro Almodovar are inevitable with a film so spontaneous and free in its dealings with youthful love, so littered with varied musical offerings, and so awash in primary colors, but they're especially apt for Dolan, who hasn't so much invisibly integrated his influences into his cinematic vocabulary yet as he has rehashed them in all their dazzling glory. Heartbeats is almost never less than fraudulent - albeit a kind of acceptable fraudulence given how beautifully and comfortably Dolan seems to adopt the mannerisms - which means that when it manages to possess its own singular vision it's particularly special. Dolan has the finicky (some may say masturbatory, and they'd be primed for support when his character indeed masturbates in the film) eye to sensationalize anything he finds visually compelling - the kiss of a breast in extreme close-up, Maria's voluptuous behind in a hot pink dress, the pirouette of cigarette smoke up nostrils, the drip of rain across an umbrella, the scrape of a red high heel shoe across a forest road covered in leaves - and it offers a painterly inspection of detail rarely seen in narrative films with an agenda. Moreover, Dolan has a talent for rendering key moments abstract in his juicy shallow focus cinematography, such as the climactic hissy fit thrown between Francis and Maria in the woods, in which his camera thrusts into the frantic movement of their entangled bodies, creating a swirl of colors and blurry action.

My initial reaction was to scoff at Heartbeats for its deeply self-conscious gimmicks and its glaring hipness, but I was pulled under its spell rather quickly, sympathetic to its experiential approach to the rhythms of unrequited love. Dolan would have a fairly solid and consistent sophomore feature if only he was smart enough to trust his narrative alone and do away with the insufferable faux-documentary questionnaire segments with 21st Century Romantics that periodically interrupt the plot and severely weaken the growing mood with irritating snap zooms and stuffy dialogue. As it is, Heartbeats, aside from occasionally being a fantastically sensual experience, merely reveals the fertile ground on which Dolan will hopefully refine his style in years to come. In other words, it's a tantalizing if flawed work, and if Dolan can take a lesson from his characters and learn to better direct and shape his stylistic assaults, he can probably wind up with something equal to his vivid influences.
Posted by Carson Lund at 5:09 PM