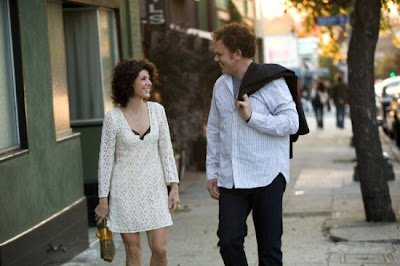 The Duplass brothers have a knack for first acts, that prolonged down-in-the-dumps segment where the plot is free to go wherever it pleases and the characters have nowhere to go but up. It's where their uncanny feel for dialogue, pacing, and awkward silence is most readily apparent, and where their cast tends to let loose the most before being constrained to fit into the boxy, strategic dramas their films become. Cyrus takes that tendency and magnifies it, coming away with a dynamite opening thirty minutes and a mere pedestrian, forgettable progression from there. Following John (John C. Reilly) in his drunken stupor around a party in search of a new female prospect at the insistence of his curiously nurturing ex-wife of eight years, Jamie (Catherine Keener), the film effectively strikes a typically Mumblecore-esque brand of hilarity that the Duplass brothers have been credited for originating. A lot of this has to do with the professional nonchalance of Reilly, who has now built up a sizable repertoire of these kinds of bumbling, idiotic, perversely lovable figures (Step Brothers, Walk Hard, and especially his turns as Dr. Steve Brule on Tim and Eric Awesome Show and Check it Out!). His garbled, tossed-off delivery of the phrase "get more drunk" when faced with the iconic predicament of what more to do at the party, is priceless.

Unfortunately, and unlike the Duplass brothers' previous features, very little of this has to do with the direction or the writing. For all intents and purposes, everything behind the camera is rather clumsy and tired. In The Puffy Chair, the brothers set up complicated scenarios for their characters - such as the question of what to do with a two-person limit on hotel rooms with a limited budget and three twentysomethings - that unleashed a narcoticized form of slapstick that was unique to their comedy. Furthermore, they were able to slip in stray lines that hilariously deflected the mounting drama (Rhett's probing "don't forget about the lizards"). Not to say these qualities are entirely absent from Cyrus, but they're few and far between. Instead, the brothers are comfortable and settled in their banal, overused setups (a party, a wedding, a stuffy household), preferring to rest all the weight on Reilly's shoulders. The majority of this film's comedy - which, to be sure, dwindles quickly - spawns from Reilly's goofy mannerisms, his flimsy euphemisms and his uncertain gait. 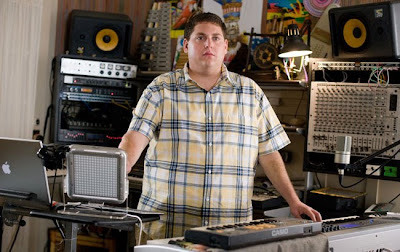 As drama, the film is even less convincing. When Molly (Marisa Tomei) finds John pissing in a bush at the party and she's instantly taken by him, the romance that ensues is criminally underdeveloped. Because the script is more interested in using their newfound relationship as a function through which to investigate the progressive bloodlust between John and Molly's son Cyrus (Jonah Hill), it's inevitably reduced to a footnote. One can simply check off each benchmark in their relationship (the cute introduction, the subsequent dance, the first sex, the first fight, John's move-in) without finding any of the necessary cushion to provide any kind of complete character development. Molly's merely an overprotective free-spirit who remains illogically faithful to her conniving son even when he's threatening the first relationship she's had in 30 years, and the seeds of this gullibility and maternal over-enthusiasm are left unexplored. John's transformation from depressed deadbeat to born-again romantic retains very little of the childish awkwardness and clownishness that is central to his character, and Cyrus' sudden epiphany of his own destructive behavior carries not an ounce of pathological realism.

Before sounding like I'm railing gleefully against what is essentially a pretty modest rom-com, I should remark that there's nothing outwardly objectionable about Cyrus. It's a light, breezy film, capable of making you laugh and even feel sympathy for these characters. Its fundamental setback though is that it's so sluggish and programmatic that it slips quickly from the mind. Another Mumblecore film, regardless of whether or not it's a crossover hit with Hollywood stars (and this definitely strikes the same terrain as Greenberg), is bound to obscurity if it follows the same guidebook. And the Duplass brothers certainly seem stubbornly fixated on their trademark style, immune to how their particular techniques are beneficial to the material or not. For every instance that they employ a snap zoom that effectively augments the laughs (like when Cyrus gives John a blank-face stare while showcasing his amateurish techno music), there's a time when this same camera flourish aggressively imposes on a more dramatic scene. At the very least, this makes the Duplass brothers filmmakers for our generation: refusing to alter their insistent signature in the face of circumstances where adaptivity is increasingly necessary.
Posted by Carson Lund at 10:21 PM

Watching the Duplass films for me is like mining. I have to chip away all the plot and obtrusive camera work to get to the specks of joviality and sincerity that they allow to sprinkle through. I can't say that there is any selling out, but I haven't found much to be sold on to begin with. I simply have to cope with the reality that I don't find them very interesting artists. Somehow I was led to watch this film, but it just left me feeling empty afterward. Everything you say about the inherent obtrusiveness of their style makes sense, but I would forgive it all if only there was something interesting to draw on, but I just don't get that sense. Thankfully there are better filmmakers, so I won't miss them much.

It's interesting to see so much backlash against the Duplass brothers' slapdash zooming style, which is certainly not unique to them or new in any way. Why something like, say, The Office is regularly praised for the same manner of cinematography and the Duplass brothers are hammered for it doesn't make sense to me. I think that at its best, their technique is not obtrusive at all; rather, it compliments and even enhances the onscreen action. As I said, it's only when they insist on a democracy of style irrespective of what they're filming that it becomes irritating.

That being said, I think the Duplass brothers have their place. They're certainly not "very interesting artists", nor are they even the best of the Mumblecore bunch, but I think they do have some modest talents.

Well, The Office is constantly breaking the fourth wall, and whenever the camera becomes obtrusive it is actually indicative of the cameraman becoming intrusive, so in that sense it is a perfect marriage of intent and execution. With the Duplass brothers I just don't see the point. Their film grammar works as more of a meaningless affectation than a meaningful augmentation. You noted the same issue in part, so I was agreeing with you at least in part. I can say that I don't remember their style ever complimenting the action, but, then, since they are not attempting to break the fourth wall then its success is measured by its invisibility, so perhaps I'd find them more competent at their best on a rewatch. On reflection, though, it's the sore thumbs that stick out as opposed to the healthy ones. Does the inconsistency itself not color the properly functioning uses of grammar for you? When I notice a contradiction as such then my mind tends to try to build a connection between the two - is this one ironic because it functions so differently? No, it just doesn't function? Why use it at all here, then? Was it supposed to function poorly in the other cases? Breaking the fourth wall when you don't want to break the fourth wall is dangerous stuff.