The Hurt Locker (2008) A Film by Kathryn Bigelow

It is rare in American war films that we are presented with characters that are as alarmingly single-minded and undiscriminating as those in Kathryn Bigelow's The Hurt Locker, a taut, stringent panorama of the Iraq war as well as a first-hand account of the suffocating tension of an omnipresent life-or-death mindset. Usually, soldiers are much more than what is presented onscreen, with dense backstories fashioned by the filmmakers to account for their actions, or perhaps they have a bubbling, unspoken rift against their own side. Instead, Bigelow's film is - with the exception of a few didactic scenes - uninterested in dressing its characters up in psychological complexity, favoring a tactile view laden with complacent martyrs willing to uncritically accept the agenda that has been laid out for them. It's not so much a conventional war film providing details about the political conflict at hand as it is an almost documentary-like observation of the experience of battle. For this, it's safe to say that it is anti-Hollywood, hardly giving its audience any extraneous details to clumsily promote an emotional engagement.

Sergeant William James (Jeremy Renner), the film's vacuous central character, is hard proof of this fact. Taking up the role of lead bomb defuser as part of the bomb squad Bravo Company in the place of Sgt. Matt Thompson (Guy Pearce), who meets a tragic end in the first scene of the film, James is a hard-nosed warrior with a complete lack of fear in the face of danger. He is at first off-putting to his two subordinates, Sgt. J.T Sanborn (Anthony Mackie) and Owen Eldridge (Brian Geraghty), because of his callous nature and his refusal to follow the survivalist protocols such as keeping headsets and bomb suits on during missions. Though the trio never forms much of a kinship, they begin to grow accustomed to James' unorthodox professionalism simply by enduring it over and over and making it out of situations unharmed, just as we begin to gradually settle in to Renner's character.

However, Bigelow never lets us be fully comfortable with James. She doesn't attempt to enlighten us about his enigma, preferring to keep his overwhelming motivation towards combat unexplained. He is clearly not simply a blood-lusting savage or a macho show-off; he seems to defuse bombs with a perverse enthusiasm as if it's the only thing in life that he knows how to do with expert precision. We know due to a humorous anecdotal claim (and, more irritatingly, an obvious manifestation of that spoken claim late in the film) that he has no way with family, because he is apathetic about his ambiguously defined significant other and unsure about the merits of having a child, while Sanborn professes to desire this path of life. Yet at the same time he is not a misanthrope, for Bigelow injects him with the occasional humane quality, such as his repeated encounters with a young Iraqi selling DVD's at the Army station, counteracted by his subsequent anger and sadness when he finds the boy's bloody body as a carcass stuffed with terrorist explosives. 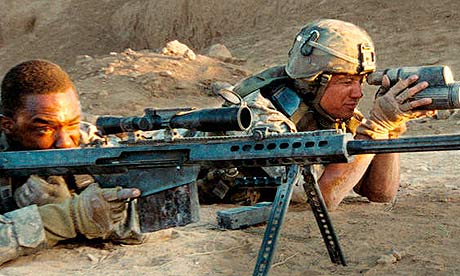 Whereas James may be endlessly mysterious for the elusive contradictions that continue to unravel at his core, the other soldiers are fascinating for an opposite reason. Their devotion to formal workmanship and alliance is so steadfast as to be unfounded. What are they fighting for? Why do they display such loyalty to James when he makes little noticeable attempt to reciprocate by following rules? Why do they so reflexively denounce the Iraqi enemies as "bastards" and "assholes" and fire at them with no refrain? Sanborn and Eldridge do not ask themselves these questions, which would inevitably take the film into more actively political territory, contrasting with Bigelow's desire to keep ideological slants out of the picture. However, no matter how much Bigelow intends to be stridently apolitical, the fact that she fixates on American soldiers in Iraq without detailing their past lives or their understanding of the war they're fighting for paradoxically becomes deliciously open-ended, and some sort of political reading is unavoidable. The Hurt Locker leaves us only with these determined soldiers and their actions in combat and inadvertently asks us to try to decide what makes them so determined.

In keeping with the film's relatively contemplative tone, Bigelow eschews an over-arching plot and instead concocts a tight string of sequences documenting the bomb squad's dangerous missions. The suspense is extremely potent as James plods over towards the hidden bombs and Sanborn and Eldridge sit back with their guns perpetually ready to fire, on the lookout for any sign of terrorist spies intending to lure the Americans into a trap. The kinetic camerawork, though at times too heavy-handed in its attempt to scream realism, nonetheless effectively captures the anxiety present in these hazardous circumstances, and the muted, ugly palette, adding a palpable presence of heat and dust on top of the collective rattle of war equipment, augments the stifling quality of Bigelow's set pieces. It's difficult to recall more immersive, grounded combat scenes than the tepidly paced long-distance sniper shoot-out in the desert or the two-minute long paranoia of an innocent man strapped with a slew of explosives (which, to be sure, actually lasts two minutes, as opposed to that unbelievable Hollywood gimmick of exhaustively elongating time during vital moments). Bigelow makes us live the war here unlike any of the other Iraq films in all its hideous immediacy as well as its eerie tedium.
Posted by Carson Lund at 4:35 PM

I'm glad you finally saw this film, Carson. It's splendid. Completely unlike her ex-husband (James Cameron), Bigelow is a gifted director, and I wish she'd do more films. Be sure you see her '80s vampire film Near Dark at some point. I'm hard to please when it comes to vampires, but this overlooked gem made my top-10 cut.

Yeah, I agree about James Cameron, but at least it appears Bigelow took from him an acute skill in directing strong action sequences. I'm not quite partial to vampire films, unless they are so deconstructed as to be set apart from the genre altogether, such as Herzog's Nosferatu or Let the Right One In, but I'll look into Near Dark.

Instead, Bigelow's film is - with the exception of a few didactic scenes - uninterested in dressing its characters up in psychological complexity, favoring "...a tactile view laden with complacent martyrs willing to uncritically accept the agenda that has been laid out for them. It's not so much a conventional war film providing details about the political conflict at hand as it is an almost documentary-like observation of the experience of battle. For this, it's safe to say that it is anti-Hollywood, hardly giving its audience any extraneous details to clumsily promote an emotional engagement."

I love this, Carson.

Though I did think, for a documentary-like observation, its main character seems quite Hollywood - a misguided Superman.

Thanks, Stephen. You're probably correct about Sgt. James' blown-up persona being relatively in line with Hollywood types, but what I find different here is how little Bigelow attempts to assert her own point-of-view about Renner's character. She doesn't ever suggest that James can solve any problem, like Superman, nor does she give him much of a conceivable character arch. It's like the physicality of Superman stripped of emotional and psychological "depth" (if you want to call Superman a character of depth), a cultural hero seen through an almost (and I use this hyperbolically) Bressonian lens.

This film with the Bressonian 'model' acting style - that would have been something!

Carson, very well-worded work here. I was really blown away when I saw The Hurt Locker back in the summer... since then, I've become less enamored with it, but I do think it's one of the year's most successful films. I'd have to say my personal favorite of Bigelow's films is K-19: The Widowmaker (2002). Most people dislike Harrison Ford and Liam Neeson's performances in that movie (because of their Russian accents), but I think their portrayals of the submarine captains in that movie are as strong as they possibly could have been.

The only place where we really disagree is on the claim that Hurt Locker is "the only film that puts us in the war". I'd also reserve that effect for what I consider the best film on the war to date: De Palma's Redacted. Of course, that's just because my preferred films on the Iraq War are the most political ones (Hurt Locker tries to stay as far away from politics as possible- which is the only problem I have with it).

Adam, I haven't seen any of Bigelow's other films.

I don't think that it's "the only film that puts us in the war". That would be a tall, ludicrous statement; of course there is a vast number of great classic war films, like Kubrick's Paths of Glory or Gillo Pontecorvo's The Battle of Algiers for instance, that are as immediately brutal in their depictions of combat as any films I've ever seen. If anything, The Hurt Locker might be one of Hollywood's finest immersions into war territory, although I haven't seen Redacted.

Out of curiosity, why do you find the political Iraq war films more satisfying? I love The Hurt Locker for its experiential aspect, the fact that Bigelow doesn't want to force a statement down your throat but instead simply let you see the war through the eyes of these soldiers. At the same time, I can understand why some people have found it irresponsible that the film takes on such a substantial current political issue as its subtext but does nothing more with it than portray the adversary as a faceless other. These criticisms have forced me to slightly reevaluate my initial appraisal.

Well, this is really just my far-leftist side speaking here, but I'm always ranting about what The Hurt Locker might have been like if John McCain had been elected president. Would Bigelow and Mark Boal still have made the film in the way that they did? Without political intent? McCain wanted to keep us stationed in Iraq for the next century; and a film like The Hurt Locker, although it is apolitical, certainly would have seemed to encourage that conflict. Nile Gardiner of the Daily Telegraph, for example, has voted The Hurt Locker "one of the top ten conservative films of the decade". You can see why I'm so paranoid.

I was referring to the part in your review when you said that the film is the only film about the Iraq War that really puts us into the experience of combat over in that particular country. About Redacted, I'm an outspoken admirer of that film- so I can't guarantee that you'll like it as much as I did. I basically loved it because I'm a huge De Palma fan and because I hadn't seen another film so passionate in its critique of the war. I actually caused quite a firestorm when I submitted a divise essay on it to Cinema Viewfinder for their De Palma Blogathon back in September:

I understand your concern, although I wouldn't call The Hurt Locker a conservative film either. It doesn't make sense to look at it in light of any political doctrines. I forget who wrote that the film is not "pro-war" or "anti-war", but rather "pro-soldier". In any case, they said it best. The film would have been spoiled for me had it been bestowed with sentimental Hollywood liberal fantasies.