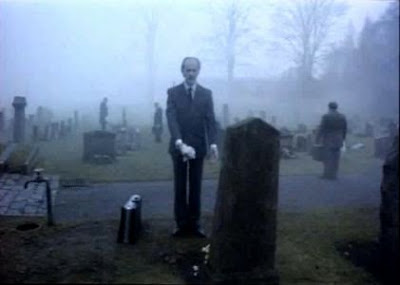 During an aggressively confrontational scene of mass genocide that inaugurates Roy Andersson's essential short film World of Glory, a lanky man, the figure who becomes the center of interest for the rest of the film, turns around in his fixed position to look directly into the lens. He does so amongst a larger group of stiffly dressed men and women who inactively loiter around a horrific scene: a truck full of naked people is taken on a trip around a parking lot while the diesel exhaust fumes of the truck empty into their space. He also does so vacuously, either unaware of the immorality of it or unwilling to express any feelings that would contradict those of his peers. It's safe to say that the man looks at us, the provoked viewers, but it is perhaps more accurate to declare that he turns to gaze at humanity, the cumulative force that positions itself in close proximity to such horrors but only impassively looks on. The camera also assumes the weight of history and the unfortunate tendency for deplorable events to repeat themselves in different forms and for different reasons over a large span of time. It is Andersson's prerogative to lament the fact that, much to our ignorance, these acts have become progressively less visible to society as a whole.

This stance is decidedly more precise and polemical than those taken in Andersson's other films, ones that usually lean towards the existential, the unknown, and the unsolvable. Songs from the Second Floor was a somber and at times absurd riff on the meaning of life, and the more levelheaded You, the Living focused on the trials and tribulations of quotidian existence. World of Glory, an accomplished precursor to these two films, adopts the same histrionic, punctilious static-take style but fixes its attention on one character rather than shifting extemporaneously between vaguely related stories. The lanky man, camouflaged within his grayish surroundings by a thick coat of white makeup, stands in the middle of a series of perfectly composed frames to take us on a tour of his day-to-day life. He shows us his unremarkable possessions, like a small car, a bed, and a plain kitchen, and his similarly struggling family, with a mother on her deathbed, a dead father in a graveyard, a silent brother stuck in the throes of a mechanical job, and a young son getting the word Volvo carved into his forehead. The line between morbidity and black comedy is always played with in Andersson's films, but here it most closely leans towards the former. There is a frequent tension between whether it is right or wrong to laugh, but at times Andersson can't help but stage scenes with such caustic wit that his comedic side comes to the fore, such as when the man guzzles from a wine glass at mass for several seconds too long as a way to drink away his repressed sins.

The dire life of the central character, and the presumably miserable lives of the static figures that surround him, hint at the collective guilt of humanity. Andersson physically manifests this notion in the exaggerated mise-en-scene, one where characters hardly move an inch or crack a smile and stand with their shoulders hunched like zombies in foggy graveyards. World of Glory also introduces Andersson's concern for the force of consumerism, emphasizing the way materials dominate the lives of his characters, specifically in the shot of his little boy with the forehead imprint. The film's eerie classical soundtrack - which periodically rises in volume over the entirety of the film - weaves in and out of the scenes and the long black leader that separates them, creating a persistent mystery. It's a film that is absolutely brilliant in its deadpan simplicity, and positions itself as one of the medium's finest short works.
Posted by Carson Lund at 9:19 AM