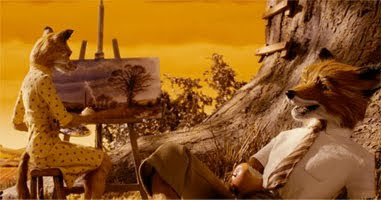 Pushed along by the onslaught of sophisticated computer technology, animation as an artistic medium has lost some of its charm in recent years. Pixar's films look increasingly unbelievable and more approximated to reality, making us marvel at how close the images come to being completely lifelike. More and more, it seems that it is only in the "experimental" quarters where one can witness something truly unique being done with the primitive techniques of animation: line-drawing, stop-motion puppetry, etc. In the mainstream, it has become an anomaly to see a work like this that exploits the self-reflexive potential of the medium or draws attention to its own fundamental artifice. Wes Anderson's latest film Fantastic Mr. Fox is unsurprisingly - given the fact that Anderson has always been a director to only skate on the very fringes of the mainstream - one of those rarities. With its deliberate imperfections and unreal sense of movement, it stands as a welcome critical and commercial success that breaks free from the contemporary trends in digital animation.

When the initial furor over Fantastic Mr. Fox diminishes, I think that it will be remembered first and foremost for these formal characteristics, the way Anderson's fox and opossum characters leap and bound across the frame in a way that seems anatomically impossible, and the way he infuses every whisker with manufactured emotion when in close-up. Often times it seems like frames may have been mistakenly dropped as figures jerk purposefully through Anderson's dioramic tableaux, a result that is at first jarring but ultimately delightful. Every panoramic view is carefully constructed from left to right and top to bottom, with not a pixel of wasted space in a compositional sense. Many have pointed out how this self-conscious manipulation is only a natural progression for Anderson because of how cartoonish and astray from reality his characters have been in the past, but I think it is essentially working to emphasize the reality of these foxes, that they're always pulsing with energy, ready to unleash their animal instincts at a seconds notice.

Anderson's move to animation is also content-conscious. Fantastic Mr. Fox is adapted from Roald Dahl's judiciously illustrated children's book of the same name, a story about a vibrant community of foxes. Its primary focus is on one individual family, the father of which has grown stir crazy from occupying the same underground home for a great deal of time. Once a budding thief, proficient at harassing hens and sneaking into the prized alcoholic cider house, Mr. Fox (voiced by George Clooney) has decided, at the insistence of his practical, soothing wife (Meryl Streep), to lay low for a while. In the manner of classic crime movie archetypes however, Mr. Fox chooses to team up with Badger the opossum (Bill Murray) for one last job in hopes of sticking it to the three cruel farmers, Boggis, Bunce, and Bean, once and for all. This whopping plan eventually goes haywire when the farmers trap the foxes underground, forcing the entire community to work together to solve the problem.

It is through this predicament that the film mines timeless truths about family, community, and natural instinct. For the majority of the film, Mrs. Fox rolls her eyes at Mr. Fox's go-get-em attitude, preferring for him to settle down and sort out his responsibilities as opposed to complaining about his living situation and the supposed pains it causes him. In the end, Mr. Fox overcomes the farmers because of this overwhelming desire to embrace his own wild tendencies, to flee from captivity. Likewise, Mr. Fox's neglected son Ash - played by Jason Schwartzman in a role not unlike his other semi to fully fatherless characters in Anderson's previous work (Rushmore, The Darjeeling Limited) - spends most of the film disappearing beneath the shadow of his athletic cousin Kristofferson (Wes' brother Eric Anderson), but learns to accept his weaknesses and embrace his cousin as a friend. As always in Anderson's work, these somewhat uplifting metamorphoses are treated with a droll and forgiving eye rather than a sentimental one. And it is the acknowledgment of the necessity of compromise - between wildness and domesticity, responsibility and personal enjoyment, self-efficacy and complacency - that makes it a multifaceted children's film as well as an extension of Anderson's characteristic concerns.

Did I say children's film? It's tough not to, but besides the fact that half of its targeted demographic is likely children, and that a children's book is its source material, the bulk of the comedy in the film and the pedantry of its formal treats would seemingly go right over the head of a child. Anderson's "jokes" remain purely situational as opposed to punch-line-oriented, and the closest the film comes to one-liners is in the form of running in-jokes that are usually slipped between the cracks of fluffy, expedient dialogue. The visual world the film creates, now constructed from scratch instead of plowing through the limitations of real world sets, is impressively in step with all of Anderson's work, right down to the two-dimensional look reliant on tracking shots, the ubiquity of the Futura typeface, a clever pop soundtrack, and the presence of an overarching color scheme (in this case a beautiful honey golden). Never before has this aesthetic reached further than its strictly cultish following, but Fantastic Mr. Fox is lighter on the dark undertones that Anderson so frequently likes to entertain and heavier on the fun. It's a remarkably lean, easily watchable endeavor that is hilarious and punchy from its first moment to its last.
Posted by Carson Lund at 11:42 AM

Carson, do you mind if I link to this piece or the one on Persepolis for a post on my blog (checkingonmysausages) of animated film reviews?

Absolutely! I would greatly appreciate it.

Thanks Carson. The post of links will be up in a couple of days.

This review is too short…I want more.

This film is aging well (even though Coraline is my favourite animated film from last year). It’s taut, good intentioned, funny and moving and boasts some excellent voice performances. When I listed the cast as one of the best of the decade I was not joking. I don’t go as gaga over Streep as most but her voice work here is just superb.

I'm sorry I didn't write 8 paragraphs like in my Shutter Island piece, but something about Anderson's work is so consistent, and so consistently lean, that it can be difficult to devise new things to say.

The voice acting is indeed stellar. I love Jason Schwartzman especially, who delivers some wondrously deadpan lines that become funnier in the context of a fox.