I'll come right out and admit that I have not read Cormac McCarthy's novel The Road, the basis of John Hillcoat's new film adaption. Yet I hope that this will help to provide a new perspective, considering nearly every review out there unfairly places every aspect of the film version beside those same aspects in the book and compares them. In most instances, it turns into this petty game where it seems as if the critic is trying to prove that the bigger brother will always be stronger, smarter, and more unique. Yes, Hillcoat is certainly a devotee of McCarthy's literature considering he has chosen to follow it so closely. But no matter how reverent he is, his film is a separate object altogether composed of images rather than words; it warrants its own judgment as a singular piece of cinema. Otherwise, reviews become biased and tell more about the critic's preoccupations than the film's. If there's ever going to be intelligent debate about the cross-section between literature and film, both need to be digested on their own first instead of immediately becoming such a comparative match.

Now that I have that out of the way, I'll go forth with my discussion of the film that has garnered knee-jerk descriptors such as "depressing" and "bleak". While The Road does take place in a post-apocalyptic Earth where evil cannibals massively overshadow the good guys and no solution is in sight, its ostensible core qualities - hope, love, and perseverance - fall several notches short of misanthropic. To give an idea of how diminutive the moral population is, the central father/son relationship (between Viggo Mortensen and Kodi Smit-McPhee) appears to be its lone presence for a great deal of the film, whereas snarling, toothless figures tend to peruse the devastated landscape in wild packs. There is no indication as to what caused the environmental disaster, but whatever the case, it was muscular enough to cast a lifeless gray over the entirety of the land, which is scattered with rusty cars, tipped powerlines, and fallen tree branches. Curiously, many houses remain structurally intact, and instead of containing measly scraps of food, they have turned into torture chambers where cannibals keep ravaged humans they plan to devour. At times, this imagery veers dangerously close to the overdone vistas of I Am Legend (2007), but in its more subdued moments, boasts dazzling, almost painterly visual invention.

It is across this terrain that The Man and The Boy travel, headed - in suggestively mystical manner - towards the sea. The crux of the film takes place on "the road", interrupted on occasion by decidedly idyllic flashbacks of life before the disaster, where images of flowers, sunlight, and The Man's beautiful wife (Charlize Theron) often times come across too mannered to be taken as convincing recollections. To be sure however, this dreamt up perfection is supposed to be in the context of a lovesick husband who is damned to spend the rest of his existence warding off enemies with his remaining two bullets in a loveless setting; the unexpectedly quick excisions of these visions only accentuates their ephemerality. It is also through these flashbacks that we get an ambiguous lesson about why the wife is not with the two of them in their journey. Apparently, Mortensen knew only how to give (evidenced by a scene from the past where he slips his hand between his wife's thighs at an upscale theater), and Theron was done with taking, so their relationship went south. Theron is seen somberly leaving the film into pitch darkness during what seems to be the immediate aftermath of the disaster. 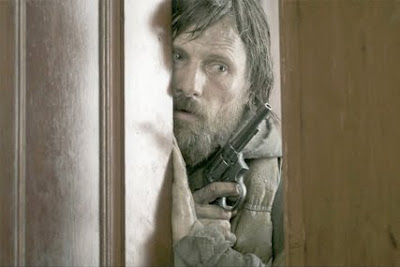 The Man's ceaseless attachment to his wife may help explain any believable lack of this with his son. Instead, his protection of his son feels entirely animalistic, the kind of instinctual urge that causes him to cover his son in his coat and rope him into his bosom when predators are near. Their discussions are limited to the here-and-now (The Boy regularly asks questions like "are we gonna die?") rather than rooted in any sort of tenderly shared experiences. Therefore, it appears that Mortensen protects his son for his wife, knowing that she brought him into the world, and has only the utmost dedication to act as his personal security guard. Unfortunately, Hillcoat doesn't handle this tricky dynamic too well, and before one realizes this may be the case, Mortensen and Smit-McPhee have already delivered a string of tepid scenes lacking much chemistry, stitched together by Mortensen's inconsistent narration. On individual terms, especially in a scene when The Man speaks timidly with an old blind man looking for food (Robert Duvall as a product of an expert makeup department), Mortensen is typically magnetic, yet one gets the sense that he can only deliver so many performances involving a dirty face and crying before it becomes a comfortable formality. As for Smit-McPhee, there were multiple pouty scenes that encouraged me to laugh.

For all its minor mistakes though, The Road is a compelling, if at times repelling, portrait of post-apocalyptic survivalism. Its tone is admirably consistent and unflinchingly bleak (to give in and use the oft-quoted adjective). The remarkable high-contrast, dimly lit cinematography is its standout feature. Yet for all its riveting, brutal suspense, Hillcoat can't manage to completely sidestep the melodramatic influence of Hollywood. After a series of tear-jerking close-ups set to Nick Cave's slightly manipulative score (which can supplement the visuals perfectly one moment and intrude jarringly the next), The Boy is left alone beside the sea. He believes he is the only human left who "carries the fire", his metaphor for possessing goodness, but conveniently, the Great American family arrives on the scene in the nick of time to take The Boy under their wing. If Hillcoat had resisted the desire for a tidy resolution, The Road could have concluded as the relentlessly dark parable it was for its majority.
Posted by Carson Lund at 1:16 PM

one of the better reviews i've read. seems that not comparing it to the book certainly helps taking in the film version.

Nice review Carson, as always. I put this film on my pick list of The Top 10 Religiously Themed Films of the Decade.

Once again, an excellent review. I didn’t read the novel either and I found the film excellent in spurts, it’s strange I think the set is excellent, the acting likewise and the writing and Hillcoat’s direction astounds me at times but add it all up together and it’s good but not great. I can’t say why.

I will say that in a few short moments Charlize Theron greatly impresses me as the Wife giving a particularly unmannered performance, and of course Viggo is good.