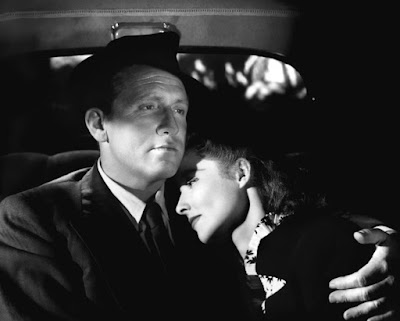 "Harping on the politics of a 1942 romantic comedy is a dubious game, especially when one considers that the context for Woman of the Year's American exceptionalism was the pall of Nazism. But the film plays particularly poorly in 2017, and not only because its central narrative thrust involves the question of how to handle refugees, the relevance or lack thereof of the traditional blue-collar American male, and the place of feminism within American life. The film's conservative agenda also shortchanges Tracy and Hepburn's chemistry. The former's earthy restraint and the latter's electric sensuality are best collided in the early stages of the plot before Sam and Tess's differing worldviews stir conflict (one alcohol-lubricated back and forth in which the lovers hesitantly flesh out their respective backstories features a sizzling arrangement of intimate close-ups). But the screenplay's emphasis on Sam and Tess's disparities quickly fosters an environment that runs counter to Tracy and Hepburn's finest asset when sharing the screen together: the sense that the actors, and not just the characters they're playing, can barely contain their affection for one another."

Full review of The Criterion Collection's new Blu-ray release of Woman of the Year continues here.
Posted by Carson Lund at 12:08 PM