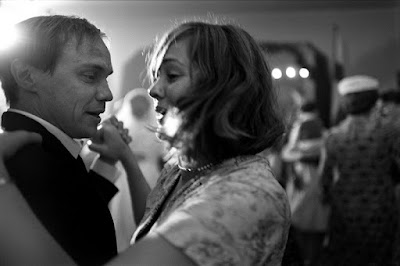 "With its 16mm black-and-white cinematography and lack of musical score, however, The Happiest Day in the Life of Olli Mäki reaches further back into history for its primary cinematic touchstones, specifically to the grayscale neorealism of Ermanno Olmi and the Czech New Wave films, works which unhurriedly examined the plights of working-class everymen jostled around by forces of class and economics. It's noted often in the dialogue that Mäki's humble background is as a baker, and Elis repeatedly reminds him of the pitiful 'backwoods' to which he will return if he fails to live up to the hype. Alas, Kuosmanen places his sympathies squarely with the rube who's hopelessly out of place in a globalized market."

Review continues at Slant Magazine.
Posted by Carson Lund at 11:09 AM