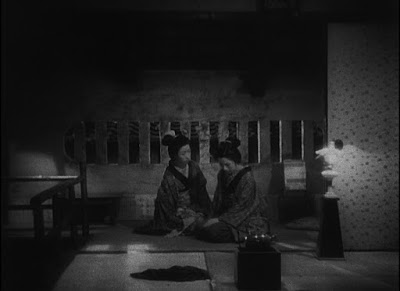 "On the back cover of their Blu-ray release of The Story of the Last Chrysanthemum, the Criterion Collection heralds the 1939 Kenji Mizoguchi film as 'the first full realization of the hypnotic long takes and eloquent camera movements that would come to define the director's films'—a seductive claim, to be sure, but one with the potential to mislead. The Japanese filmmaker was experimenting with the cited aesthetic as early as 1935 with The Downfall of Osen, which withheld a close-up revelation of its titular protagonist until the tail end of a lugubrious flashback structure, while 1937's criminally underseen The Straits of Love and Hate, inspired by Leo Tolstoy's Resurrection, plays like a model for Hou Hsiao-hsien's work in its serene patience and pictorial distance. That's, of course, to account for only Mizoguchi's extant films; within the dozens undiscovered, it's reasonable to assume, given the stylistically bold temperament of something even as early as 1925's The Song of Home, that there's some sophisticated time-sculpting going on elsewhere."

Reviewed the new Criterion Blu-ray.
Posted by Carson Lund at 10:31 AM