All Fall Down (1962) A Film by John Frankenheimer 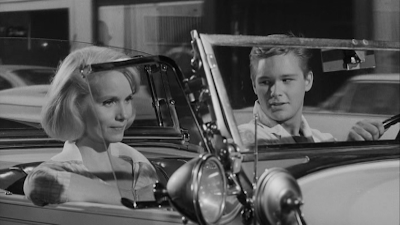 All Fall Down doesn’t have a plot so much as a cluster of relationships that collide with one another over the course of two hours, messily coexisting largely in the space of a suburban home. These relationships belong to a family, though we wouldn’t know it from their interactions. Irregularly developed brothers Clinton (Brandon de Wilde) and Berry-Berry (Warren Beatty) both call their mother Annabell (Angela Lansbury) by her first name. Alcoholic, borderline nutso patriarch Ralph (evoking the father in Capra's Arsenic and Old Lace) calls his eldest “Rhinoceros” for no apparent reason, and eventually claims that he truly is a Rhinoceros. Berry-Berry’s a moody drifter with a rotating pile of intense but disposable romantic relationships—the latest being his impromptu marriage with his brother’s love interest, Echo (Eva Marie Saint), who also happens to be his mother’s good friend (there are no women of significance under 40 in this movie). At one point, in a moment of revealing mystery, Berry-Berry kisses Annabell upon returning home after years away and the camera catches only an obstructed view from behind Beatty’s shoulder, leaving up in the air the question of whether it’s a tender mother-son cheek-peck or an incestuous spit-swap.

All of this suggests a nuclear family unit fractured by suspended Freudian anxieties, ingrained timidity around one another, and a lingering sense of postwar malaise, none of which director John Frankenheimer attempts to analyze for the audience. His filmmaking is both totally direct in its full disclosure of each narrative incident from unbiased, detached points of view and deeply quizzical in its refusal to investigate the root causes or immediate repercussions of peculiar household behavior. Why, for instance, does Annabell seem to coax her youngest boy into various romantic situations with her peer, and then shrink in apparent jealousy when her eldest swoops in on the situation? Why, when this initial flirtation does strike with obvious sexual implications, does Ralph shrug the whole thing off as if it’s just teenage tomfoolery? When Berry-Berry finally obliges to share a coffee with his parents for the first time in years, the awkwardly contrived nature of the arrangement is palpable: this is a family who has lost all ability to behave like a family, leaving only demented miscalculations of intimacy instead. 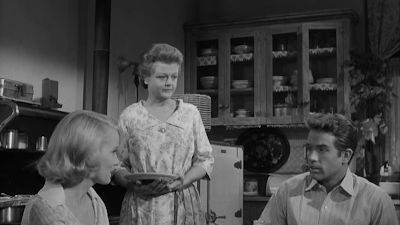 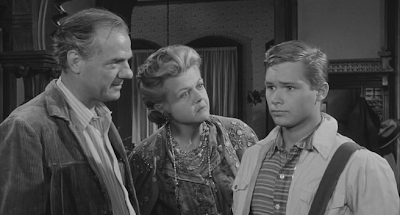 For a microcosm of the film’s approach, look no further than the brisk climactic scene, in which Berry-Berry undergoes a midnight meltdown that ends with him berating his wife for her pregnancy before charging out of the house in exhaustion. The scene starts with Beatty brooding in the living room, his dead stare and the abnormal silence of the household acting as omens of something terrible on the horizon. Hobbling portentously up the stairs in front of a queasy handheld camera, Berry-Berry then invades his brother’s room upstairs for a moment of sulking, during which the camera temporarily settles back into sturdy repose. After inspecting the other two bedrooms for signs of life, Beatty barrels back downstairs and all the way down to the basement, where he finds Echo reading at Ralph’s desk. With the exception of one cutaway to the brother’s perspective as he gleans the ensuing argument from a crack in the soaking ground-level window outside, the whole exchange plays out in a few up-close-and-personal deep-focus shots that put characteristic emphasis on Beatty’s dripping perspiration. Soon after, the final disintegration is captured in a sweeping front-yard crane shot, the claustrophobic chamber drama tone suddenly blossoming into full-blown melodrama.

Nervous motion, jumbled trajectories (in this case, up, down, and back again), and a mixing of visual styles on a scene-by-scene and sometimes shot-by-shot basis—the movie sustains this temperament throughout. One minute it’s tossing off a Bigger Than Life-esque sequence of stairwell histrionics and the next it’s passing time with mopey small-town atmospherics reminiscent of late John Huston. All Fall Down feels like a broken film about a broken family living in a broken time and place; nothing moves fluidly, and nothing should.